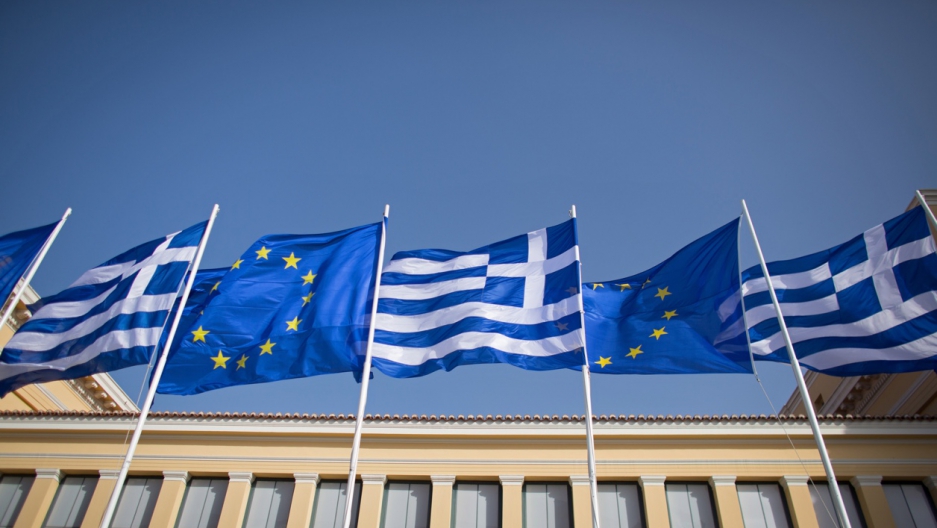 The national flag of Greece and the flag of the European Union fly above a government building in Athens, Greece.
Share

BARCELONA, Spain — Leaders of the campaign to take Britain out of the European Union point to Norway or Switzerland as examples of how countries can thrive outside the EU’s embrace.

Greek politicians who may be on an inexorable slide toward an EU exit have been less vocal about their models for a post-EU future.

It’s not difficult to see why — most of the alternatives don’t look that attractive. Here’s a look at six paths other countries have taken that could open up to Greece if it leaves the European Union. Greeks won’t want to hear this, but their historic rival may offer a best-case scenario. Turkey has thrived outside the European Union. Growth rolled along at 5 percent a year for a decade before 2012. It has since slowed to an average of 3 percent, still much better than the euro zone overall, which contracted over the same period. Per person, it’s now richer than some EU members. Turkey has built its success on a stable currency, tight finances and pro-business politics to attract investment — just the sort of thing the European Union has been unsuccessfully asking Greece’s far-left government to implement over the past six months. Hardliners in the Syriza party now running Greece have long harbored dreams of building a self-sufficient egalitarian utopia that would be a sort of screw-you to the big capitalist powers to the north. Greece, however, doesn’t have Venezuela's oil resources, and Greeks may be unwilling to swap Western consumerism for a socialist lifestyle, despite their discontent with austerity policies mandated by the European Union over the past five years. A special forces soldier from Belarus demonstrates his ability to sustain a blow during a competition outside Minsk on Feb. 23, 2014. The competition was part of a holiday held by former Soviet countries every year.

Greece doesn’t have to stand alone. Greek Prime Minister Alexis Tsipras was in St. Petersburg this month, stressing historic and cultural ties with Russia and praising Russian President Vladimir Putin’s plans for a Eurasian Union to rival the European one. Putin is sure to be sympathetic. He’s been building ties with euro-skeptic parties across Europe and despite Russia’s own economic problems could extend a helping hand to the Greeks. This is the scenario that has Washington worried — that a strategically located NATO ally could be sucked Belarus-like into Russia’s sphere of influence. Riot police take cover behind their armored vehicle during clashes with protesters in Pristina, Kosovo on Jan. 27, 2015.

Greece as another impoverished, politically unstable Balkan republic? Post-Grexit, the country could be saddled with a near worthless currency, battered by inflation and shunned by investors. Without the restraints of EU rules, deep-seated cronyism and corruption would worsen. Greece’s Balkan neighbors to the north provide a cautionary tale. Kosovo — which broke away from Serbia in 1999 — has unemployment running at 35 percent and is hemorrhaging people as its citizens flock to seek a better future inside the European Union. A young girl in Iceland support her soccer club.

The Nordic country was battered by the global financial crisis. It was so bad that this fiercely independent island considered joining the euro zone. Instead it let its currency devalue (the crown went from 60 to 140 to the dollar in less than a year), imposed capital controls, and let banks collapse. Gradually its economy crawled back. It grew by 3.6 percent in 2013, although it slowed a bit last year. Some in the Greek government think that by regaining economic and monetary independence outside the euro zone and by having a currency they can devalue, they could generate a similar rebound. Democracy may have been born in ancient Greece, but there are doubts about the strength of its foundations in modern times. In parliament this weekend, opposition politicians accused Syriza of acting like a dictatorship and ignoring the constitution. Such words resonate in a country that endured civil war between left and right in the aftermath of World War II and only emerged from military-backed dictatorship in 1974. Domestic terrorism and violent protests have frequently scared the political scene. EU membership has underpinned democracy since Greece joined in 1981; an exit and economic turmoil would produce enormous strains on an already fractured political system. A nightmare scenario of civil strife or authoritarian crackdown is the one everybody is hoping to avoid.