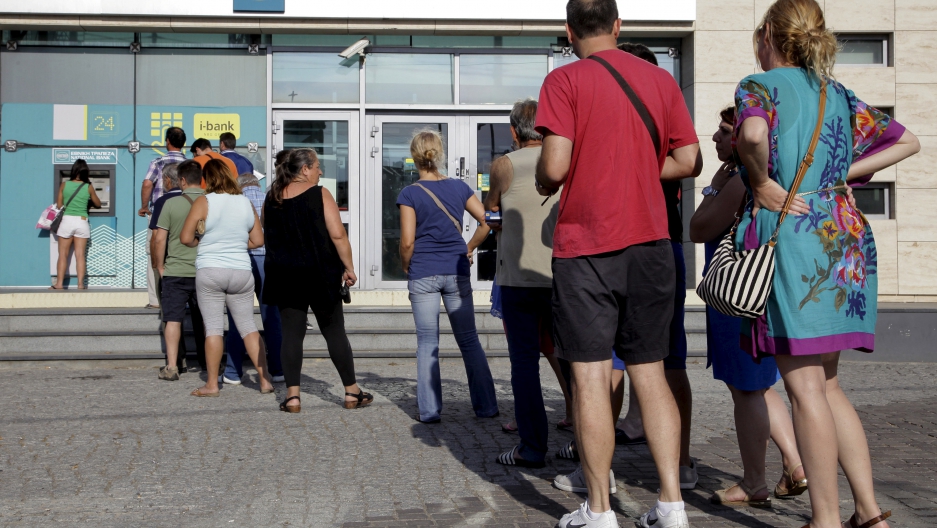 People in Greece lined up outside of ATMs on Sunday to withdraw as much cash as they could. Bitcoin supporters argue that the virtual currency is more secure because it's not subject to any government control.

The Bitcoin community is having an "I told you so" moment.

The value of the virtual currency has been on the rise this past month amid the growing panic about Greek’s financial future. Across the country, banks are shuttered and capital controls are in place until the referendum on Sunday. By Saturday, a rush emptied as many as 500 ATMs, Bloomberg reported.

It’s in this context that using Bitcoin may seem appealing. The virtual currency is touted by its fans as the future of finance because it isn’t subject to any governmental control or central authority.

For many, including well-known Internet entrepreneur and businessman Kim Dotcom, the crisis in Greece serves as a huge argument in favor of Bitcoin.

It is likely that a #Greece bankruptcy will trigger a market crash. My advice: Buy #Bitcoin & #Gold Both will rise when the markets crash.

At least some Greeks are listening to Dotcom. CNN Money reported Monday that the Europe's largest Bitcoin exchange, Bitcoin.de, has seen 10 times the number of Greek users in the past 10 days than usual. One company is taking advantage of the rush. Bitcoin startup Coinbase announced Monday they would be waiving fees for any customers buying or selling Bitcoins with Euros until early July.

However, access to Bitcoins is still extremely limited. For instance, Greece only has one Bitcoin ATM in the entire country, tucked away in a bookstore in Athens. In addition, the most common way people buy and sell Bitcoins requires a wire transfer - which requires a bank. But public knowledge about Bitcoin is in even shorter supply.

“I don’t think there will be a huge push from Greek society itself,” says Kyle Kemper, executive director of the Bitcoin Alliance of Canada. “But this is a wake-up call for the entire world, because this isn’t going to be the last time this happens. There are a lot of other countries who are in the same situation as Greece.”

Kemper says the merits of using Bitcoin will become apparent because it is politically neutral and is therefore protected from regional and geopolitical instability. However, because so few people use the virtual currency, it’s still relatively volatile.

“I wouldn’t say that Bitcoin is a riskless proposition at this point,” he says.

As of now, each Bitcoin is priced at around $250, up from $240 last week. But Tony Gallippi, the co-founder and executive chairman of Bitpay, a international Bitcoin payment service, says he expects to see that price skyrocket.

The #bitcoin market just needs a little GREASE to get unstuck. #Grexit price targets $610 and $1250 pic.twitter.com/A0ZJ0ppdfZ

His predictions may not be completely unfounded. In 2013, around the time when banks collapsed in Cyprus, the price of one Bitcoin increased by almost 90 percent. However, many don’t buy the connection between the two events, and instead point to an influx of investment from Silicon Valley.