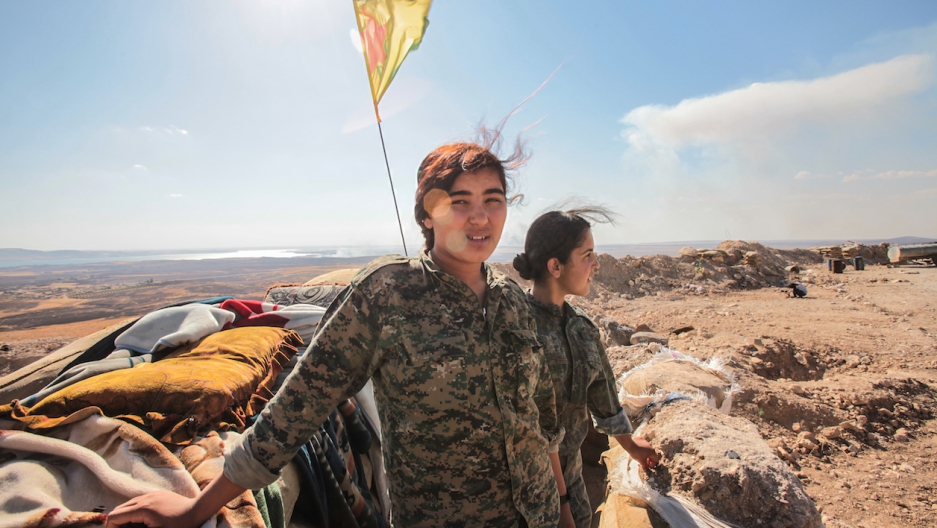 Fighters from a Kurdish People's Protection Unit, or YPG, pose near a checkpoint on the outskirts of the destroyed Syrian town of Kobani, Syria, on June 20, 2015.
Credit: Ahmet Sik
Share

CAMBRIDGE, Massachusetts — Open your favorite fashion magazine these days and you may see an unfamiliar sight: women in uniform, holding automatic weapons.

Strangely glam portraits of fierce female warriors have recently proliferated. To most, they seem novel, out of the ordinary. But the truth is that women have taken active part in conflicts all over the world, from Sri Lanka to Sierra Leone. Some armed units are 30-plus percent female.

When wars end, though, these women become next to invisible. In every country, they have been overlooked and underserved by processes set up to disarm fighters and reintegrate them into civilian life.

Think of the consequences of ignoring 30 percent of an armed force. Ex-combatants who lack viable job opportunities may again take up arms. If they can’t reconcile with communities — often those that bore the brunt of violence — underlying tensions may boil to the surface. For female fighters, who are often doubly stigmatized because they defied traditional gender roles, the risks are even greater.

Here are eight things you might not know about women who fight in wars and how to make them partners in building long-term peace.

1. Not every combatant carries a gun Female peshmerga fighters in a Kurdish area of Iraq. Since 2012, an all-female brigade called the Women’s Protection Unit (YPJ) has battled the Islamic State in northern Syria.

Whether they volunteered or were forcibly recruited, are armed or unarmed, these women experience severe disruption, living for months or years at a time in remote areas. They endure as much deprivation and danger as any soldier.

Eligibility for post-war services is typically contingent on turning in a weapon. In Sierra Leone, for instance, combatants had to present, disassemble and reassemble a weapon before they could gain access to benefits. Women without guns cannot prove they were active participants in the war. Eligibility for ex-combatant services needs to be based on a nuanced understanding of women’s roles.

2. Even women with guns must be carefully counted Often, commanders are asked to supply names of eligible fighters. Some may manipulate this process, excluding those outside their inner circle or who don’t hold formal ranks.

Women, as a minority within armed groups, are particularly at risk of being left out. To avoid this, the UN or other actors implementing the disarmament process must go directly to the source — female combatants themselves — to obtain reliable data. This will lead to a more accurate picture of how many women are serving, what roles they play, and what specific services they may require.

For instance, in Colombia, the government and the FARC rebel group are currently deciding how to end a decades-long war. Estimates suggest that women comprise a staggering 30 to 40 percent of FARC members, many in combat roles. Better data about these female combatants will ensure that the FARC’s re-entry into civilian life is inclusive and complete. A woman and her child photographed in a transit camp for demobilized former combatants in Kota-Koli, Equateur province, DR Congo, during the visit to the camp by the Special Representative of the UN Secretary-General in the DRC, Martin Kobler, on Sept. 11, 2014.

If planners see demobilization as only for men, reproductive and gynecological health care will be absent. Many women bear children during their time in armed groups. Others may have suffered miscarriages, contracted sexually transmitted diseases, or been victims of rape or sexual trauma, both at the hands of enemy forces and their fellow soldiers.

They, and their dependents, need specialized care: reproductive and gynecological check-ups, psychological counseling, sanitary napkins, and family planning services are all critical to meeting the particular needs of female ex-combatants. In Darfur, former combatants from the Popular Defense Force (PDF) seeking reintegration services from a UN camp in 2011. After being disarmed, PDF members were given medical exams, advisory services, and financial assistance of about 800 Sudanese pounds.

Reintegration of ex-combatants typically includes some form of financial assistance. The assumption is that, without this safety net, fighters are more likely to return to armed struggle or take up criminal activities.

Direct cash payments can disadvantage female combatants. Lump sum disbursements are often determined by rank; many women hold no formal title or are prevented from advancing to the highest levels due to their gender.

In some situations, women have reported that their male commanders or husbands confiscated payments distributed to them. A better approach is to invest in long-term economic security by providing educational vouchers or food assistance, rather than cash. Once in the forces, some rise to leadership positions, managing brigades and making command decisions. Female combatants, including those in support roles, also learn new skills during wartime — from weaponry to first aid.

But job-training programs for ex-combatants often sideline women, pushing them into customary female responsibilities like sewing or cooking. Programs that seek to reintegrate women into communities must account for the non-traditional roles they’ve become accustomed to, providing opportunities for jobs in law enforcement, medicine, and other fields customarily dominated by men.

6. Who provides services matters. So does where they do it Female police officers deployed to the UN peacekeeping mission in Timor-Leste, where they were the only women on the force in 2007. By the end of the mission in 2012, the number had increased to seven women (11% of the total force).

The design of demobilization facilities and the composition of the staffs are critically important. It’s good practice to provide women with separate bunks, and female-only latrines and washing facilities in well-lit areas; not only for privacy, but to reduce the risk of sexual violence.

Strong female representation among staff and leadership of demobilization centers is essential. Identifying women from armed units for services, interviewing them about their experiences, and supporting them with proper care are likely to be more successful if those providing these services aren’t all men. Women welcome UN personnel to a local community in North Darfur, 2011. They helped promote pro-disarmament messages among the population of nearby villages traditionally controlled by a number of armed militias.

For peace to succeed, planners must also engage women within the local communities where fighters will resettle. Many of these areas experienced severe violence, and residents may struggle to accept former combatants as their neighbors.

Local civilian women can help — or hinder — the reintegration process. They can encourage their families and community members to either welcome combatants or shun them. It’s critical to capitalize on local women’s formal and informal authority, by making them allies in reducing stigma, encouraging forgiveness, and delivering services. They should be engaged early on in planning and implementing those processes by which ex-combatants and communities learn to live together again.

8. Above all, women’s agency must be recognized A female fighter walks through the bush in eastern Democratic Republic of Congo in 2013. Women like this are typically invisible within our limited vision of war and those who fight it.

Decades of disarming forces in dozens of conflicts have revealed failures and successes. There is no one-size-fits-all solution. The roles women and men play in armed struggles are complicated and nuanced. Shouldn’t our efforts to shift combatants into peaceful post-conflict roles be the same?

Women in armed groups are more than just an exotic novelty; they are primary agents in building lasting security. If we want peace to last, we must recognize their power and account for their presence.

Kristin Williams is senior writer and program officer at The Institute for Inclusive Security.