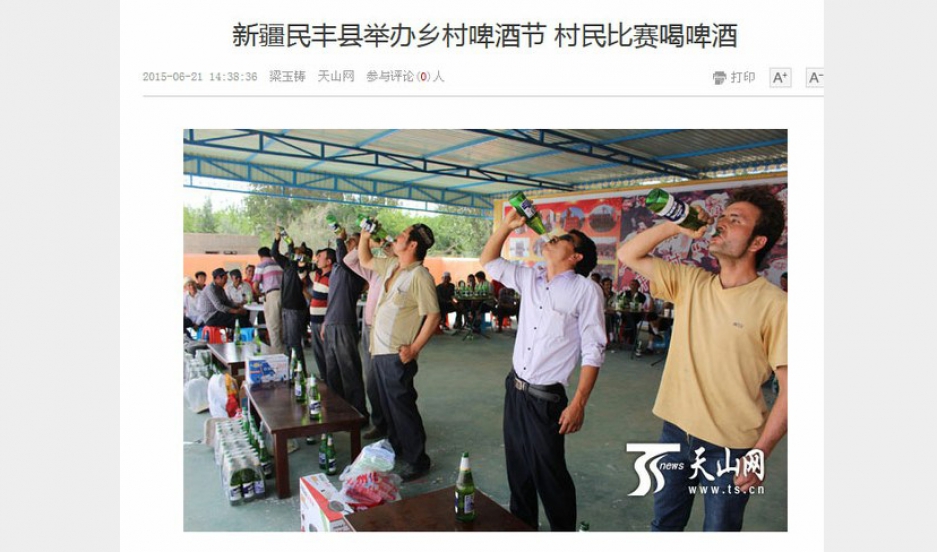 Men downing bottles of beer as part of a state-sponsored festival ahead of Ramadan in a Muslim-dominated area of China.

The Chinese Communist Party has been known to prohibit its Muslims citizens from fasting during the month of Ramadan. But this year, they are taking a cue from Homer Simpson.

Beer. It's all about the beer.

A hops-filled festival with cash prizes is among this year's government innovations in Muslim-majority areas. Did we mention prizes? Other tactics: a propaganda film warning of the dangers of fasting and a government order to force restaurants to promote cigarettes and — D'oh! — alcohol.

The beer festival was organized by local government on June 15, two days before the fasting month started, in a village in Niya,  deep south of Xinjiang, an area dominated by the Muslim Uighur people, Reuters reported. A news report (top image) published by the regional government news website Tianshan News on Sunday said some 100 people participated in the “beer competition” during the festival which also featured performances by local artists. It published a picture showing several men, including one wearing a traditional Uighur skull cap, downing bottles of beer to win the competition that offered cash prizes up to $160.

The event aimed to “use modern culture to brighten up the village's cultural life, squeeze the space for illegal religious promotion, dominate the village’s cultural and public discourse...and guarantee the village's harmony and stability."

One villager was quoted by the official news site as saying: "This activity that's been organized is great, livening up the busy farming seasons and banishing our tiredness. I'm going to drink up, and I'll definitely get a top prize to take home and make my wife happy."

Oh, but of course.

However, the news report on Tianshan News together with its reproduced versions on other Chinese websites have been taken down for unknown reason. PRI managed to find cached versions of the reports on several websites.

A post on a Chinese Muslim online forum criticizing the event has been replaced by a message that read: “Sorry, the article you are looking for does not exist or is under review.”

A post on a Chinese Muslim online forum criticizing the beer festival has been taken down.

It is a Chinese government policy to remove online content deemed unfavorable to the authority. In Xinjiang's capital, Urumqi, the state publicity agency has launched a series of short online propaganda films earlier this month to “counter religious extremism.” One of the 10 films, titled “Fasting”, told the story of a Muslim schoolgirl who was instructed by her father to fast during Ramadan after celebrating her 10th birthday. She collapsed in school and hospitalized due to malnutrition. The six-minute film ended with the guilty father apologizing and offering food to his daughter.

In Yutian, another district in Xinjiang, local authorities have ordered shops and restaurants operated by Muslim Uighur to sell and promote alcohol and cigarettes or face closure.

Radio Free Asia published an official notice issued by Aktash village Communist Party committee on April 29 that stated “all restaurants and supermarkets in our village should place five different brands of alcohol and cigarettes in their shops before [May 1, 2015].” 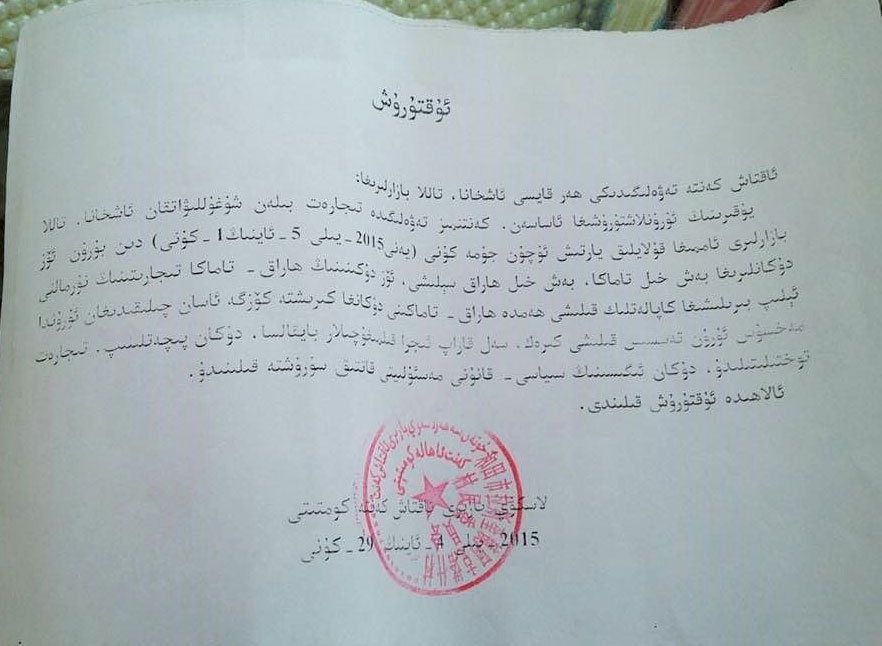 A notice from the Aktash village Party Committee of Laskuy township orders shop owners to sell alcohol and cigarettes.

Owners were required to create “eye-catching displays” to promote the products or their shops would be sealed off and they would face legal action, the notice added. Aktash party committee secretary Adil Sulayman told Radio Free Asia’s Uyghur Service that the directive was part of “a campaign to weaken religion (Islam) here”.

“Since 2012, people have stopped selling alcohol and cigarettes through their businesses. Even those who benefitted financially from the practice have given it up because they fear public scorn. That is why [the order was issued],” he was quoted as saying.

These efforts are part of Chinese President Xi Jinping’s ongoing anti-terror campaign that was launched after a series of terrorist attacks which the authority has attributed to Xinjiang Uyghur religious extremists. Some local authorities also directed Muslim government officials to sign letter of commitment to ensure they and their families will not fast or participate in any religious activities during the month of Ramadan.

The food and drug administration of Jinghe county in Xinjiang even had a policy to encourage food establishments to operate normal hours during Ramadan by reducing inspections on them. It was one of the four measurements came out from an “emergency meeting” called on June 11 to “prevent extreme religious ideologies from disrupting the normal operation of Halal food providers,” said a notice published on its official website.

An emergency meeting called by the food and drug administration of Jinghe county to formulate measurements to prohibit Muslim from fasting.

RELATED: Deep in the heart of Texas, a Halal BBQ so good that everyone loves it.