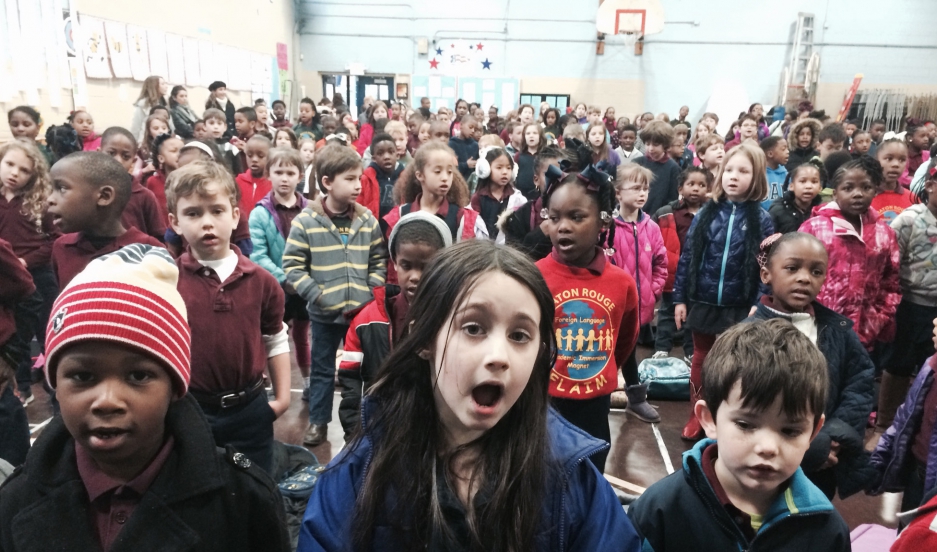 Morning assembly at Baton Rouge FLAIM.  Every day begins with some walking, dancing, singing and announcements in French, Spanish, and English.

Don't mess with Principal Miller. Cheryl Miller is the principal of the Baton Rouge Foreign Language Academic Immersion Magnet — they call it Baton Rouge FLAIM for short — and walking around the school she exudes authority.

It’s never “yes” when you address Ms. Miller, it’s “Yes, ma’am.” Miller's been principal at FLAIM for the last 16 years.

FLAIM is part of East Baton Rouge Parish School System, the largest school system in the state. The district is also party to one of the longest desegregation cases in the country, lasting 47 years. For that reason, FLAIM has undergone many changes throughout its history. It was once a white-only school, then it became all-black, and then, under the desegregation order, the school eventually became a foreign language magnet.

At FLAIM, French and Spanish immersion programs were used as the proverbial "carrot" to draw middle class families back into the public school system. It wasn't an immediate draw, says Miller.

“Believe it or not some people would look at the building and say, how shall I say, some white — mostly white women, would say ... 'Oh, it looks terrible!' And it did,” says Miller.

It’s true. The school facilities aren't the best looking. The gym is ancient. You can see the pipes hanging down from the ceilings. It's an old school. But in the end, language has proven to be able to hide that old building.

The hallways at Baton Rouge FLAIM are papered with children's drawings and school work in French and Spanish.

The school met that quota. The school system's desegregation order officially ended in 2003 and the school continues to draw a diverse student body. However there are many lingering questions, like from parents Kerii and Carlos Thomas.

The Thomases wanted their son to learn French. Kerii grew up in Lafayette, the heart of French-speaking Louisiana. Her parents and grandparents spoke Creole French. When they first moved to Baton Rouge, they enrolled him in a private International school that offered immersion education. Then they heard about FLAIM.

The decision to put their son in public school was a no-brainer, says Carlos Thomas.

“As black, middle class parents in a system where 80 percent of the kids are on free and reduced lunch, that sends a message that we want to invest in our public institution,” he adds.

Except little Carlos didn’t get in. Instead, he was entered into a lottery.

“I was frantic because we really wanted to continue the immersion program,” says Kerii Thomas. “I emailed the principal, emailed the superintendent, called and spoke to people.”

Little Carlos was lucky. He won the lottery and a place at the school. Despite her emails and phone calls, Kerii doesn't feel that he received any preferential treatment. But it did make her wonder about the equality of enrollment in this and other magnet programs.

“When I look back on it now, while I'm excited that he got in, there's also a realization that not everybody can advocate that way for their child,” she says.

French teacher, Madame Sizemore welcomes her students into the classroom every morning with a "Bonjour!" and a handshake.

This model is far from perfect. There are clear equality issues when it comes to who gets to go to FLAIM. And then you walk into the school itself. Go into any classroom and, on the face of it, FLAIM has achieved a diverse student body. Yet it's not quotas or lotteries or desegregation orders or even balanced enrollment that has created a feeling of diversity and equality inside the classroom. It's language, says parent Benterah Martin.

“I believe that when children learn more languages, it's harder for them to be a bigot,” says Morton.

Learning a new language exposes kids to different ways of thinking and speaking, Morton explains. And it also dismantles something academics call "the language of power."  That language of power is the standard English we all learn in school. It's the language of textbooks, it's white, middle class English. But at FLAIM that's not the case, says education professor Heather Olsen Beal.

“The language of power is not standard, edited English and it's not largely white, middle class women that are trying to impose that on their student population. The immersion curriculum makes it so that there are two languages of power — and that is Spanish and French," says Beal. "Those are both languages that none of the students come to the school knowing."

Everyone is starting at zero. Even many of the teachers, says Beal, don't speak English fluently. They are language learners too. Different isn't one person or one group. Different is everyone.

Sixty to seventy percent of the school day is taught in the target language of either French or Spanish.  This includes subjects like math and science.

“What happens when that is just part of their way of life? You go to a school and the teacher starts speaking to you in a different language and you're going to school with all these kids that look different than you — that's sort of the mission of public education,” Beal says.

Morning assembly is well underway and Principal Miller watches her students closely, keeping the fifth graders in line with a withering look, encouraging the kindergartners to stand up straight, all the time beaming a firm but encouraging smile. These are all her kids.

“We're different and sometimes we just got to understand that just because we're different doesn't mean we can't be together. And that's not a usual view in the Deep South,” says Miller.