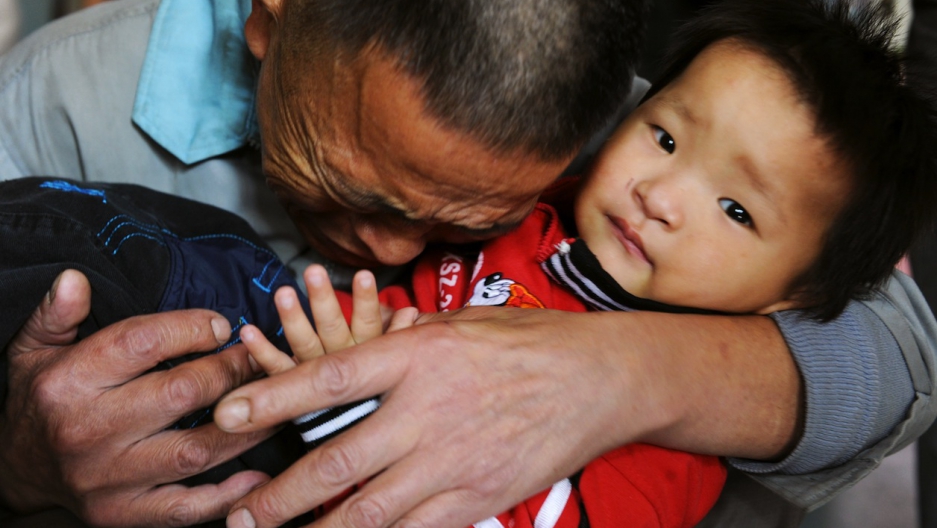 A father weeps as he hugs his son, one of 60 who were rescued from child traffickers.
Credit: Stringer
Share

BEIJING, China — It’s been an epidemic for years, but government efforts have failed to stop it. Now the plight of missing children is prompting many Chinese to take matters into their own hands, fighting kidnapping gangs with tools including apps, alert systems, and petitions calling for the perpetrators to be punished by death.

Despite government efforts to stem it, the scale of the problem remains huge. It’s believed that as many as 70,000 children go missing every year in China, though official figures are scarce and the police only report cases that are solved. Other estimates are even higher: on Weibo, China’s Twitter, a recent and widely circulated report put the number as high as 200,000 children per year.

To put that in perspective, the Department of Justice estimates that in the US, 100 to 200 reports of missing children a year qualify as “stereotypical kidnappings,” a term that describes abductions in which a child is held overnight, transported at least 50 miles, or held with the intent to keep the child permanently.

In China, a child is not officially missing until 24 hours have passed. Many citizens believe this gap of time makes kidnappings harder to stop, and have developed private initiatives in hopes of closing it.

This month, a Nanjing shopping mall reportedly became the first to launch an automated alert system to report missing family members. Meanwhile, Momo, a popular dating app, added a feature allowing its 78 million users to report and identify suspected kidnap victims in their area. The feature, developed in association with volunteer group Baobeihuijia (“Baby Come Home”), which claims to have reunited over one thousand families with their children, has renewed the public’s interest in recent cases.

One such tragic case was that of 13-year-old Wang Zhiqiang.

Shortly after Wang’s father reported him missing, police found the boy in what should have been a happy ending. But Wang’s father was never informed. The boy died of malnourishment in a state shelter six months later. Eighteen government employees in Henan province were punished this month for their role in Wang’s tragic fate.

With an adoption process too complex for many to negotiate, trafficked children are often placed with barren families who are desperate for a male heir, according to studies of the phenomenon. Those less fortunate can end up as beggars, prostitutes or slave laborers. Some are sold by their poverty-stricken parents, while others give birth specifically to feed the lucrative market. In some areas, a single male child can sell for $500 to $1500, according to Chen Shiqu, director of anti-trafficking in the Ministry of Public Security.

Many citizens argue that harsh penalties are the best way to stop trafficking. In recent weeks a campaign called “Death Penalty for Child Abduction” has gained popular support on WeChat, a mobile networking app. On Weibo, some argue that harsher penalties would drive up the price of trafficking.

“Who would risk their life for a few tens of thousands of yuan?” wrote one user.  “Wouldn’t IVF or surrogacy become cheaper?” Another countered that “if the death penalty was a panacea, how come we don’t apply it to everything?”

A DNA database introduced in 2009 specifically to tackle the epidemic has recovered over 3,500 victims, officials say, a fraction of the numbers reported. In the case of 13-year-old Wang, the police did not bother with a test that could have established his father’s identity from the database.

In the aftermath of Wang’s case, anti-trafficking director Chen acknowledged that there were problems in China’s welfare system that allowed Wang to die, vowing, “We want to change the way rescued children are treated.”

With only a tiny proportion of victims ever recovered, however, changing how missing children and their parents are treated in the first place seems a necessary first step.