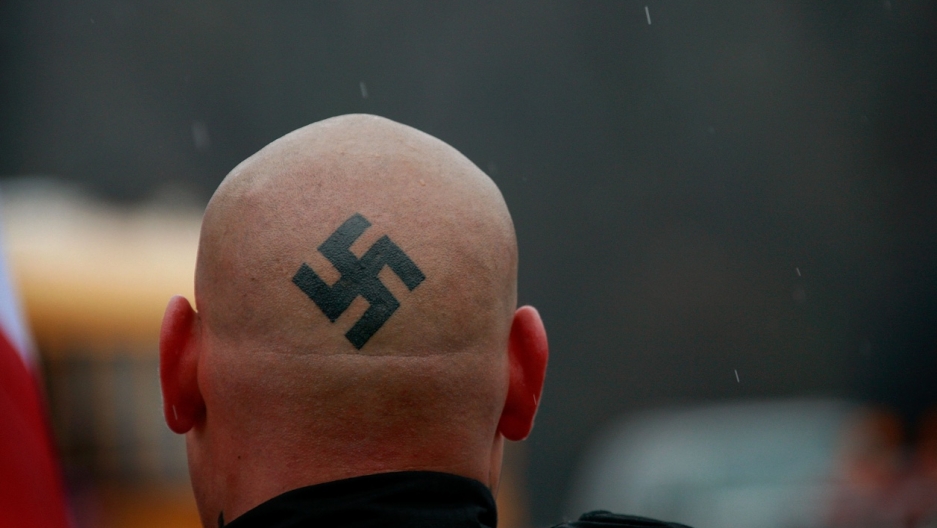 Neo-Nazi protesters demonstrate near where the grand opening ceremonies were held for the Illinois Holocaust Museum & Education Center on April 19, 2009 in Skokie, Illinois.
Share

Editor's note: This is Chatter, our former morning rundown of what you need and want to know around the world. When this story was published in 2015, the New America Foundation's study did list white Americans as the biggest terror threat in the US. Over time, as they've updated their study, the linked study has changed. Click through to find out more about terrorism in the US since 9/11.

White Americans are the biggest terror threat in the United States, according to a study by the New America Foundation. The Washington-based research organization did a review of “terror” attacks on US soil since Sept. 11, 2001 and found that most of them were carried out by radical anti-government groups or white supremacists.

Almost twice as many people have died in attacks by right-wing groups in America than have died in attacks by Muslim extremists. Of the 26 attacks since 9/11 that the group defined as terror, 19 were carried out by non-Muslims. Yet there are no white Americans languishing inside the prison camp at Guantanamo Bay. And there are no drones dropping bombs on gatherings of military-age males in the country's lawless border regions.

Attacks by right-wing groups get comparatively little coverage in the news media. Most people will struggle to remember the shooting at a Sikh temple in Wisconsin that killed six people in 2012. A man who associated with neo-Nazi groups carried out that shooting. There was also the married couple in Las Vegas who walked into a pizza shop and murdered two police officers. They left a swastika on one of the bodies before killing a third person in a Wal-Mart parking lot. Such attacks are not limited to one part of the country. In 2011, two white supremacists went on a shooting spree in the Pacific Northwest, killing four people.

More from GlobalPost: Turns out people get angry when you say white Americans are terrorists, too

Terrorism is hard to define. But here is its basic meaning: ideological violence. In its study, the New America Foundation took a narrow view of what could be considered a terror attack. Most mass shootings, for instance, like Sandy Hook or the Aurora, Colorado movie theater shooting — both in 2012 — weren't included. Also not included was the killing of three Muslim students in North Carolina earlier this year. The shooter was a neighbor and had strong opinions about religion. But he also had strong opinions about parking spaces and a history of anger issues. So that shooting was left off the list.

The killing of nine people at a church in Charleston, South Carolina last week was included. The shooter made it clear that his motivation was an ideological belief that white people are superior to black people. The shooting has cast new light on the issue of right-wing terrorism in the United States. But since it can't really use Special Forces or Predator drones on US soil, it remains unclear how the government will respond.

If your ship is going to get boarded by pirates, it's best that it happens in the waters off Indonesia. Unlike their Somali counterparts, Indonesian pirates have shown little interest in kidnapping for ransom. And, writes GlobalPost Senior Correspondent Patrick Winn, a review of Southeast Asian piracy incidents in recent years reveals a theme: the pirates are seldom brutal and like to get in and get out as quickly as possible.

That's good because piracy in the waters off of Indonesia is growing more common, and the pirates themselves are getting bolder. They regularly board giant oil tankers, subdue crews with surprisingly little violence, shut down their communications, disguise the ships in creative ways, and siphon off millions of dollars' worth of gas. Once their pirate ships are laden, they are gone.

While Somali pirates are increasingly a thing of the past, Indonesian piracy is up an incredible 700 percent in the last five years. Indonesia is a good place to be a pirate: A third of the world's shipping traffic passes by the country. There are tens of thousands of little islands and endless small coastal communities among which to hide.

As long as the violence stays to a minimum, the increased piracy is unlikely to raise that many eyebrows. For the oil and gas industry, the lost product amounts to little more than “a rounding error,” according to experts.

Poland is one of the world's most religiously conservative countries. It's as Catholic as Catholic gets. So it's pretty unsurprising that its abortion laws are some of the strictest in Europe. Basically, you can't get an abortion in Poland unless you were raped or are near death. And even then a doctor can refuse to help you.

So desperate activists are trying something new. In a few days, a consortium of women's rights groups will convene in Germany, load a drone full of pills that can be used to safely induce abortions, fly it over the border to Poland and drop the pills to activists on the other side. Some would call that smuggling.

It's been dubbed the "Abortion Drone," which is a truly disturbing pairing of words. But the goal is noble: to deliver a much-needed service to Polish women, to raise awareness in Poland that safe abortion medication exists, and to pressure the Polish government to change its draconian laws.