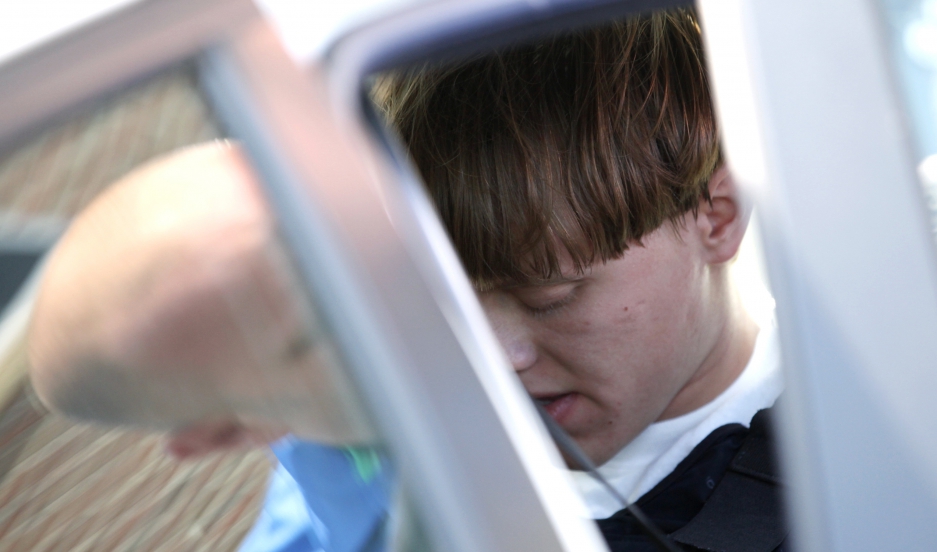 Suspected shooter Dylann Roof sits in a police vehicle in Shelby, North Carolina, June 18, 2015. Roof, a 21-year-old with a criminal record, is accused of killing nine people at a Bible-study meeting in a historic African American church in Charleston, South Carolina, in an attack US officials are investigating as a hate crime.

One week ago, nine black members of a Charleston church were shot and killed. Dylann Roof is the 21-year-old suspect in the shooting.

The suspect is white. The victims were black.

So was the massacre of those nine people at the Mother Emanuel AME Church an act of terrorism?

Masha Gessen spent years researching the lives of Boston Marathon bombers Dzhokhar and Tamerlan Tsarnaev for her book, “The Brothers: The Road to an American Tragedy.”

Gessen writes in an opinion piece for Reuters that South Carolina shooting suspect Dylann Roof should not be labeled a terrorist.

Q. What's wrong with the using the word ‘terrorist’?

Another take on the word "terrorism"

Of course the Charleston shooting was terrorism. The question is, what’s the best response?

A. I would argue that the rhetorical use of the word terrorist accomplishes the opposite of what we want to do in this case. What we want to do is look at what caused the crime and I think that when we label people terrorists, we "other" them. We portray them as less than human. We don’t actually scrutinize what caused the crime. There’s something about the rhetorical use of the term terrorist that prohibits looking at terrorists as people. But if we don’t look at perpetrators as people, we can’t figure out why they did what they did?

Q. Does focusing on a label like "terrorist" for somebody like Dylann Roof inhibit a wider conversation about race?

A. I think it probably does. ... I think the important conversation happening right now is a conversation about how what Dylann Roof did is related to a larger American context of race.

Q. Why do you say we would be “better off retiring the word [terrorism] altogether?”

Q. Is this thinking a holdover from the post-9/11 so-called global war on terror?

A. Absolutely. We are stuck on basically two things that emerged from 9/11. One was the idea — that idea that “they hate our freedom,” to quote George Bush.  What that statement says is their crimes are utterly irrational. We have no hope of understanding them. All we can do is go to war on them. That’s not true. There is a rational framework in which these crimes are committed. It’s horrifying. But it does really need to be known and understood. And the other narrative that has resulted from 9/11 is this radicalization narrative, which also has very little support in either scholarship or fact. The narrative is there are these large, international organizations that recruit people, take them through the stages of radicalization and turn them into terrorists. That doesn’t seem to be the case very often, if at all. It certainly wasn't the case with the Boston bombers. It wasn't the case with Dylann Roof.