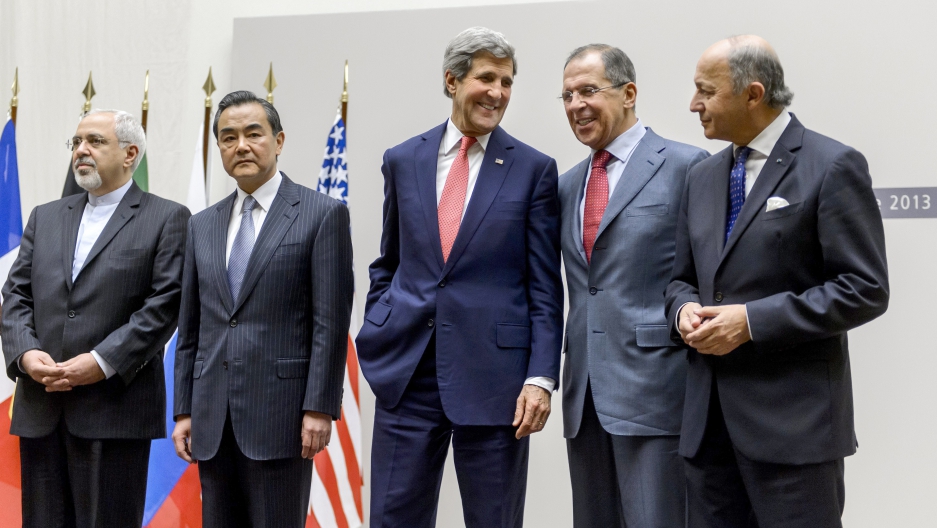 WASHINGTON, DC — As the June 30 deadline approaches for a possible nuclear deal between the US and Iran, opponents of a settlement have picked up support from an unusual source: Iran's largest Kurdish political party.

Kurds make up about 10 percent of Iran's 81 million people. An ethnic group that is spread across Turkey, Iraq, Syria and Iran, the Kurds are sometimes referred to as the world’s largest stateless minority. In Iran, they face discrimination and complain of a second class citizenship.

Mustafa Hijri, general secretary of the Democratic Party of Iranian Kurdistan (PDKI), just concluded a visit to Washington in which he met with conservative congressmen and think tank analysts to oppose a deal with Iran.

A framework agreement reached in April calls for intensified inspections of Iranian nuclear facilities in return for lifting sanctions imposed by the US and European powers.

More from GlobalPost: This timeline explains the long, bumpy road to the Iran nuclear deal

"If sanctions are lifted," Hijri told GlobalPost, "Iran will get resources to continue support for terrorists and dictatorships that sponsor terrorists such as [Syria's] Bashar al Assad. They will get more resources to make more turbulence in the Middle East."

The PDKI is the largest of three Kurdish parties operating underground in northwestern Iran. All the groups believe in armed struggle against the Iranian government, but none are currently engaged in fighting. The PDKI position is strongly opposed in Iran and among Iranian Americans.

"Like other resistance groups who have chosen violence, PDKI calculates it can only succeed if there is a confrontation between the West and Iran," said Trita Parsi, head of the National Iranian American Council, an advocacy group that lobbies in favor of a US-Iran agreement. "It has an interest in seeing the conflict escalate, not deescalate," he told GlobalPost.

But Hijri’s comments echo the fears of some hawks in the US who say Iran is already well on its way to making an atomic bomb.

"There is no doubt that Iran is enriching uranium for a nuclear weapon," said Hijri. "That's why Iran has put up with these political and economic pressures. The master plan was to get a nuclear weapon no matter what happens."

Hijri says any US-Iran deal must also include protections for Iranian human rights, particularly Iran's ethnic minorities. "There could be a better deal," he said.

Hijri's arguments mirror those of the Israel lobby and neo-conservatives in the US, according to Muhammad Sahimi, an Iranian analyst and professor at the University of Southern California. He points out that both the UN's International Atomic Energy Agency and two National Intelligence Estimates by the CIA and other agencies say Iran currently has no nuclear weapons program.

More from GlobalPost: The Israeli government has exaggerated the Iranian nuclear threat for years

As for including human rights issues in the talks, Sahimi says it would guarantee their collapse.

"It is clear that Iran will neither give up its nuclear infrastructure, nor agree to include the state of human rights in Iran, which is, by the way, terrible."

The PKDI has a long and controversial history in Iran. It began as an anti-imperialist, leftist party when Kurds sought independence from Iran in 1943. The shah (king) of Iran had withdrawn troops from the Kurdish region during World War II. Kurds governed the city of Mahabad and surrounding areas with the support of Soviet troops.

In 1945 the Kurdish Democratic Party (KDP), predecessor to the PKDI, declared an independent state, which became known as the Mahabad Republic. Influenced by Marxism-Leninism, the KDP implemented progressive reforms including providing free education for the poor and opening the first girls' high school. Classes were taught in Kurdish for the first time.

The KDP's military leader was Mustafa Barzani, father of Masoud Barzani, today's president of the Kurdish Regional Government in Iraq. When Iranian government troops took back Mahabad in 1946, the elder Barzani went into exile in the USSR. Years later the KDP established separate political parties in Iraq, Syria and Iran.

The PDKI long ago dropped Marxism and became a democratic socialist party affiliated with the Socialist International network. It supported the 1979 popular revolution against the shah and elected members to parliament, although they never served. Iranian-Kurds protest against the execution of Kurdish rebels in Iran, in the northern Iraqi Kurdish city of Arbil, on October 31, 2013.

When the new clerical leaders of Iran failed to guarantee Kurdish rights, the PDKI launched an armed uprising that wasn't completely suppressed until 1988. In recent years the PDKI has sought to ally with the US, and Hijri has visited Washington many times.

In May, thousands of Kurdish protestors clashed with police in Mahabad when rumors spread that a security official tried to rape a Kurdish maid, and she jumped out a hotel window. Demonstrators torched the hotel and dozens were injured on both sides.

Such protests prove "that Kurds have been suppressed, but they use every opportunity to raise their voices," said Hejri. "It shows that under the surface people are dissatisfied."

In the past year Kurds throughout the region have been in turmoil. Kurdish militias now control a part of northern Syria after facing serious attacks from the Islamic State and Jabhat al-Nusra. In northern Iraq, the KDP had planned to hold an independence referendum until military victories by the Islamic State derailed their plans.

Hijri notes that regional and world powers oppose an independent Iraqi Kurdistan for the moment. Nevertheless, he said, "We believe the independence of Kurdistan is a right. We have the right to self determination."

Most Iranians oppose federalism, believing it would be a first step toward Kurdish independence and splintering the country.

The PDKI opposes independence from Iran under current circumstances, however, and advocates "democratic federalism." The central government would control international affairs, the treasury and military. All other powers would devolve to local regions where Kurds, ethnic Arabs and other minorities would have considerable autonomy.

"If the nationalities can participate equally in the central government, and if they have autonomy, it would be a good opportunity for peace," said Hijri.

Sahimi, the analyst, says most Iranians oppose federalism, believing it would be a first step toward Kurdish independence and splintering the country.

"Within a democratic Iran," Sahimi said, "all the discriminations can be addressed and eliminated, regardless of their ethnic, religious [or] gender roots. The solution is a democratic Iran, not a federal Iran."

At the moment, the PKDI is not strong enough to impact Iran's governing system. But it hopes to influence the US to weaken Iran's government by continuing harsh sanctions.

GlobalPost correspondent Reese Erlich is author of "Inside Syria: The Backstory of Their Civil War and What the World Can Expect," now available in English and Arabic.