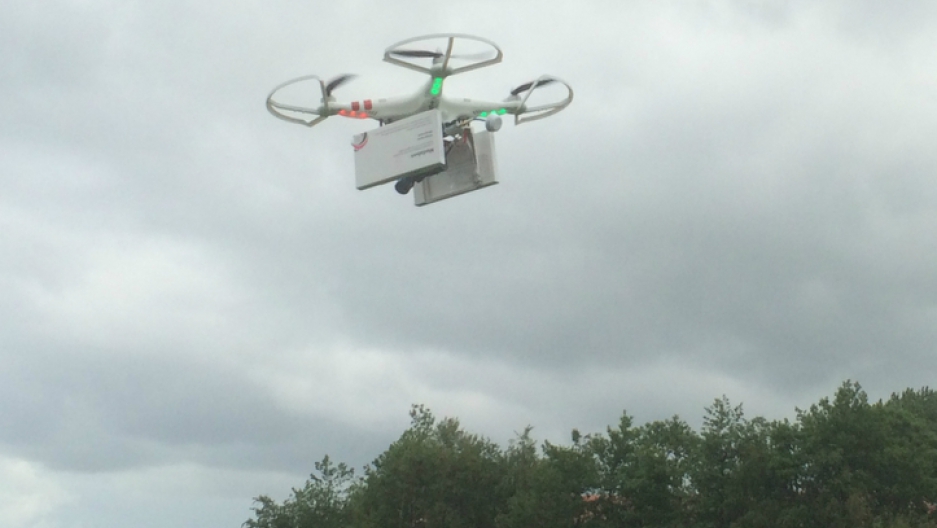 A drone will be used to deliver abortion pills to Poland.
Credit: Women on Waves Foundation
Share

It has been dubbed the “Abortion Drone,” and it’s due to make its maiden flight on Saturday.

The unmanned aerial vehicle, loaded with packets of pills that cause abortions, will depart from the German town of Frankfurt an der Oder and fly across the Oder river to the Polish town of Slubice.

It will be carrying enough mifepristone and misoprostol, abortion-inducing medication approved by the World Health Organization, for two or three women. The drugs can be taken without medical supervision in the first nine weeks of pregnancy.

Women on the other end of the drop — abortion activists in the fiercely Catholic country — will be waiting to collect the pills at a yet-to be-disclosed location.

The Netherlands-based Women on Waves, one of the four women’s rights groups involved in the event, said the aim is three-fold: to deliver a much-needed service to Polish women, to raise awareness that safe abortion medication exists, and to pressure the Polish government to change its draconian laws.

Poland is one of the very few European countries where abortion is not freely available in the first trimester.

Polish women are only allowed to terminate a pregnancy if their life or health is at risk, if the fetus has severe abnormalities or if the pregnancy is the result of rape. But doctors also have the right to refuse to carry out the procedure.

“As long as we don’t do anything the laws won’t change,” said Rebecca Gomperts, the founder and director of Women on Waves, which has previously carried out abortions on ships outside the territorial waters of countries with strict abortion laws.

“This is really about fundamental women’s rights.”

Gomperts wouldn’t say if the Polish activists due to receive the medication on Saturday are seeking abortions themselves, passing the medication to other women, or if the event is just a stunt.

It doesn't seem to be an important detail to Gomperts, who is focused on the bigger issue of bringing down the number of deaths from unsafe abortions, which is estimated to be around 47,000 a year worldwide.

The Polish government appears to have kept quiet about the planned abortion pill delivery, perhaps to avoid drawing unwanted attention to the event, but anti-abortion activists have made it clear they are not happy.

Gomperts said people have threatened to “shoot the drone down” to prevent it from delivering its controversial cargo.

But she and her colleagues are not deterred.

“We have done the ships campaign before so we know how aggressive anti-abortion activists can be, but the moment you let that decide what you are doing that’s censorship and that can not happen,” Gomperts told GlobalPost.

Gomperts said if Saturday’s delivery is a success, the rights groups plan to use the drone to deliver abortion pills to other countries where abortion is illegal or restricted, including Ireland, Brazil, Mexico and the United States.

Abortion on demand could soon become a reality for more women.