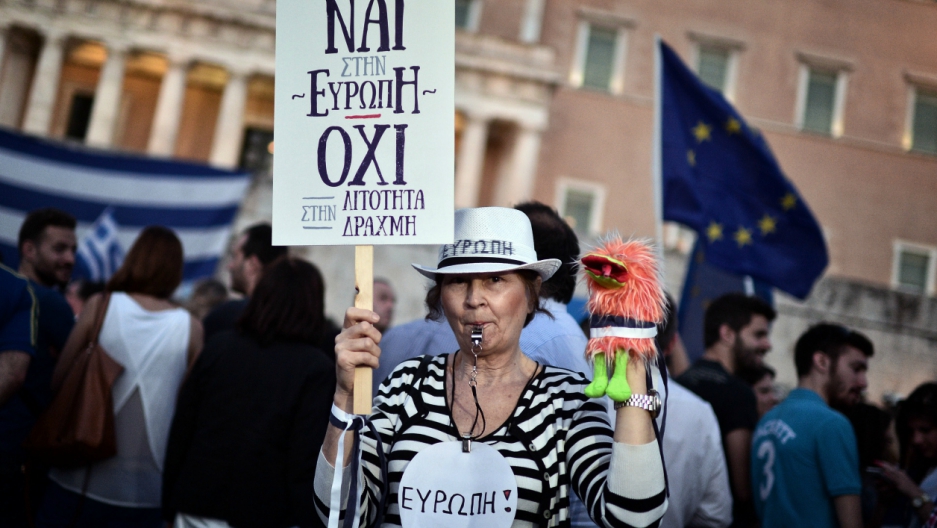 A woman holds a placard reading "Yes to Europe — No to austerity, no to drachma" during a pro-European demonstration in front of the Greek parliament in Athens on June 22, 2015.
Credit: LOUISA GOULIAMAKI
Share

ATHENS — Thousands rallied in front of the Greek parliament on Monday to show support for Athens's place in the euro zone as leaders of the single-currency bloc gathered in Brussels to discuss the cash-strapped country's fate.

The pro-euro rally, the second such demonstration in a week, came a day after an anti-austerity protest in support of Prime Minister Alexis Tsipras's hard line stance toward creditors that has pushed Greece to the brink of bankruptcy.

Like other recent rallies, Monday's demonstration failed to match the tens of thousands who have turned out in years past. But it underscored the growing anxiety and fear among Greeks over the fallout from the long-running negotiations between Athens and its creditors.

"It's been a long time that we've been in negotiations, and I feel we've been sending mixed signals to the world," said 30-year-old project manager Panagiota Kaltsa at the rally. "It's time for Greeks to make clear that Greece wants to stay in the euro and that a negotiated solution should be found soon."

The several thousand demonstrators in Athens' central square represented a broad cross-section of Greek society from young mothers with toddlers in tow to students, working professionals and pensioners keen to send a message to European leaders.

Some held European Union flags alongside Greek flags and banners like "Yes to the euro, No to the rouble" — a dig at Tsipras's overtures to Russia — and cheered as a large Greek flag was unfurled on the wall outside parliament.

Many said they were demonstrating for the first time, brought out to the streets by a fear that the country's place in the euro was in jeopardy because of Tsipras's refusal to accept the austerity terms creditors want to get aid flowing again.

"I strongly believe Greece should stay in the euro. The game this government is playing has done nothing but damage to the country," said Alex Petropoulos, a 21-year-old student who said it was his first time at a rally. "What we need is stability."

The rally was organized via a call on social media sites, but was also attended by members of the conservative opposition New Democracy party including former Prime Minister Konstantinos Mitsotakis, who joined the rally warning Greece was in "danger."

Greece faces a 1.6 billion euro payment to the IMF next week that it has no money for, leaving it just days to sign up to pension and other painful cuts demanded by lenders or face a default on its debt. In a sign of the growing exasperation with Athens, European leaders have openly begun discussing the once-taboo subject of a so-called "Grexit," though a meeting of euro zone leaders in Monday has revived hopes that a deal may yet be salvaged at the eleventh hour.

Most polls show a clear majority of Greeks want to stay in the euro, though they do not want additional austerity demanded by creditors as the price for continued membership in the bloc.

A Public Issue poll on Sunday showed 63 percent of Greeks had a positive opinion of the euro — though that was down from 76 percent in February — and 62 percent felt things would be worse off if the country returned to the drachma.

"This feels like the last opportunity to do something. Things are getting really serious," said Leron Shalit, a 21-year-old Greek-Israeli student attending the rally. "We want to send a message about staying in the euro because if we go back to the drachma, things will be incredibly difficult. We don't need to get to that point."