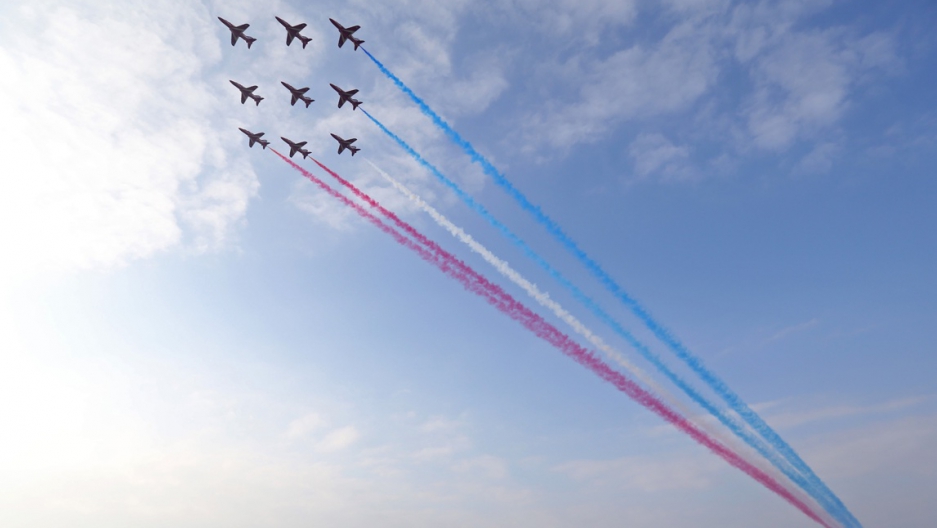 British jets fly above a 2014 NATO summit in the United Kingdom. Then, as now, Russia was the topic of discussion.
Share

LISBON, Portugal — In Belgium this weekend, more than 5,000 people will be grabbing muskets and sabers to recreate the Battle of Waterloo. That fight was waged some 200 years ago.

Further east, another historical conflict is being revived.

Thousands of Russian and NATO forces are holding rival military maneuvers, while their political leaders are resurrecting Cold War rhetoric complete with provocative deployments, nuclear threats and talk of a new arms race.

"We will be forced to aim our armed forces ... at those territories from where the threat comes," Russian President Vladimir Putin warned this week, surrounded by a phalanx of grim-faced army officers at an arms fair outside Moscow.

Putin went on to announce that Russia would be bulking up its nuclear strike force with 40 new intercontinental ballistic missiles this year that are "able to overcome even the most technically advanced anti-missile defense systems."

Western leaders have been trying to catch up in this re-playing of the Cold War since the Russian leader caught them on the hop last year by annexing Crimea and unleashing military mayhem in other bits of Ukraine.

As such, this week NATO's been flexing its own military muscle.

Almost 6,000 troops backed with fighter planes and warships are charging around northern Poland in exercises to test the alliance's new spearhead forces — set up after Putin's land-grab in Ukraine.

Elite NATO troops have been storming Polish beaches less than 100 miles from Russia's Baltic Sea enclave of Kaliningrad. NATO warplanes have been forced to scramble to intercept Russian aircraft trying to buzz the training.

"We are responding, and we are doing so by implementing the biggest reinforcement of our collective defenses since the end of the Cold War," NATO's Secretary General Jens Stoltenberg said in Poland on Wednesday.

Of course, this is not quite like the old Cold War.

Unlike Putin, Soviet leaders such as Leonid Brezhnev or Nikita Khrushchev were not prone to posing for bare-chested photo shoots, rescuing journalists from tiger attacks, or taking to the ice to fire goals past NHL stars.

The old-style Kremlin bosses also saw no need to pretend when they invaded restive countries — like Hungary in 1956, Czechoslovakia in 1968, or Afghanistan in 1979.

Putin instead sends in troops with unmarked uniforms to seize Crimea and denies regular Russian forces are active in eastern Ukraine — despite plenty of evidence to the contrary.

Beyond such details, there are mounting similarities between today's tensions and the almost five-decade standoff of the Cold War.

Back then, both sides carried out endless military maneuvers on either side of the Iron Curtain. In 2015, NATO's current exercises are part of an upgraded series of tests for its response forces with names like Red Dragon, Platinum Lion and Dynamic Manta.

Russia has been holding massive exercises near its western borders as well, involving up to 80,000 troops at a time, often with little or no warning for NATO nations. Moscow's military headquarters this month announced airborne troops are scheduled to perform more than 1,000 exercises over the coming weeks.

Concerned NATO frontline states like Poland, Romania and the Baltic republics have appealed to the alliance to strengthen border defenses.

In response, the Pentagon is considering stationing up to 5,000 troops, state-of-the-art warplanes, tanks and other heavy weapons in NATO's eastern members for the first time. Allied defense ministers in Brussels will likely debate the issue next week.

Russia's foreign ministry, meanwhile, has warned that the deployment could lead to Europe "sliding toward a new military confrontation fraught with dangerous consequences."

"Our colleagues from NATO countries are pushing us into an arms race," Russian Deputy Defense Minister Anatoly Antonov said.

In reality, Russia has been beefing up its military might at breakneck pace for years, while most NATO nations have been shrinking their defense budgets.

Russia has been beefing up its military might at breakneck pace for years, while most NATO nations have been shrinking their defense budgets.

Russia's military spending more than doubled from 2006 to 2014, taking the total to more than $84.4 billion, according to estimates from the Stockholm International Peace Research Institute. Only the United States and China now spend more.

Despite its ailing economy, Moscow spends 4.5 percent of gross domestic product on defense, compared to 3.5 percent in the United States. Among NATO's 26 European members only Britain, France, Greece and Estonia meet the alliance's 2 percent target.

Still, on paper at least, NATO should be able to beat Russia at pretty much any level of conflict short of a nuclear war — which neither side could hope to win. In a regional skirmish or even a wider conventional war, the capacity of Russia's military still lags way behind the United States.

The website globalfirepower.com lists Russia as the world's second military power, but it ranks it well below the United States on just about every metric. In addition, America's NATO allies — Britain, France, Germany and Turkey — all hold places in the top 10.

NATO's problem, and Putin is well aware of it, is a lack of political will to get tough. Since Russia marched into Ukraine, divisions among the Western allies have delayed, diluted or prevented action on anything from economic sanctions to strengthening NATO's eastern borders.

Although European Union nations agreed to extend existing sanctions on Moscow's financial, defense and energy sectors this week, there is little taste for taking tougher measures against the fragile Russian economy.

The United States this week was forced to appeal to Britain and others to reverse planned defense cuts, despite a pledge by alliance leaders last year to stick to NATO targets.

Air Force Secretary Deborah Lee James warned defense cuts could have "devastating" consequences. "We have to understand that peace and stability does not come free," she told a conference in Brussels. "This is why we must invest in our security."

Perhaps the biggest worry for NATO planners is faltering public support for standing up to Russia. A poll last week showed many Europeans oppose their country coming to the aid of NATO allies should they be attacked by Russia.

Over 50 percent of Germans, French and Italians would not want to use military force to help an ally under Russian attack, according to a survey by the Pew Research Center. That is despite NATO's key treaty commitment to treat an attack on one member as an attack on all.

In contrast, the poll found 83 percent of Russians were behind Putin's interventionist policy in Ukraine, and 61 percent believe parts of neighboring countries really belong to Russia.

That wavering solidarity within NATO is ringing alarm bells.

"We cannot defend our European way of life unless we do more for our defense, that means being ready to sacrifice for your allies," Poland's Defense Minister Tomasz Siemoniak told reporters Thursday. "It's the task of all of us to persuade the public to do more before it's too late."

The old Cold War never turned hot because both sides understood the deterrent costs were too high. This time around, there's concern in some NATO capitals that Putin is prepared to push the envelope dangerously far, because he thinks he can get away with it.