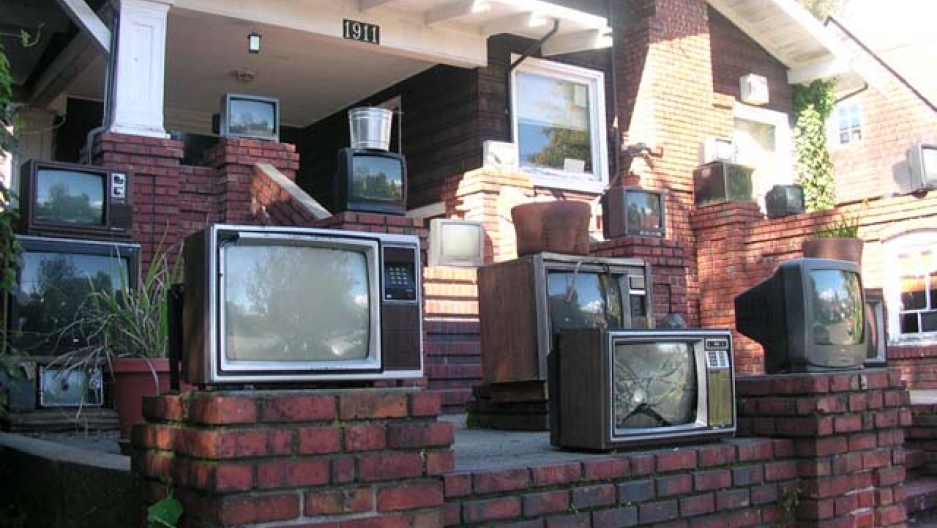 A house in Berkeley, Calif. decorated with old TV sets.

"Scandal.” “Orange Is The New Black.” “The Amy Schumer Show.” There’s so much great television, that it’s difficult to carve out enough hours in the week to watch it all.

After spending 11 hours in a Netflix-induced coma binging on the latest season of "House of Cards," you might wonder… how did television get so good?

Think back to “M.A.S.H.” or “I Love Lucy” or “Dragnet.” They might have been wonderful in their own way, but they didn’t exactly have complex, slow-burning plots.

“The assumption was that people needed to be able to pick up an episode, follow what was going on in that episode, and then maybe they would miss a couple episodes," explains Jason Mittell, a professor at Middlebury College and author of Complex TV: The Poetics of Contemporary Television Storytelling. "Every story had to be, if not self-contained, at least explicable on its own.”

A shift began around 20 years ago, when some television shows became less worried about maintaining their episodic nature. They grew more serial and complex, with writers and producers assuming the audience could handle following the show from one week to the next.

Mittell believes that this happened for two main reasons: New technology and a fragmentation of the audience.

First, the rise of a whole host of cable channels (and in more modern times, television creators like Amazon and Netflix), led to an increase in the number of niche shows being created. Take, for example, a show like "Mad Men," with it’s long monologues about advertising and existentialism:

It might not have attracted the huge ratings of "The Big Bang Theory,"but since it retained a small, dedicated audience that advertisers wanted to target, it was able to run for seven seasons.

The rise of TV on DVD lets audiences binge watch and view each season as one long movie. Though DVDs have kind of fallen by the wayside, streaming sites like Hulu and Netflix have taken their place.

Mittell thinks that the Internet, the most important new technology of all, is playing a big role in this “Golden Age” of television.

“You could argue that we have shorter attention spans because of technology, but we also have the ability to drill into a program deeper. So at the same time that television’s become more complex, the Internet has enabled ‘forensic fandom.’ Where fans can gather together on a wiki or blog and analyze a program, talk about the references to other episodes, and the intertextual links to other media.”

This creates a demand for interesting, challenging shows, one that some content providers desperately want to fill.

So, rest assured, our technology isn’t just making us distracted jerks unable to have a conversation with the person sitting across from us — it’s also allowing us get immersed in high-art television.

But Mittell says that there are some particularly powerful shows that still seem to be flying under the radar. His suggestions for your weekend viewing?

and  “Hannibal," the story of Hannibal Lecter, which Mittell says is “much more accomplished than Silence of the Lambs.” Here’s a taste (pardon the pun):

[A warning: Hannibal is a terrifying show, and this clip reflects that.]