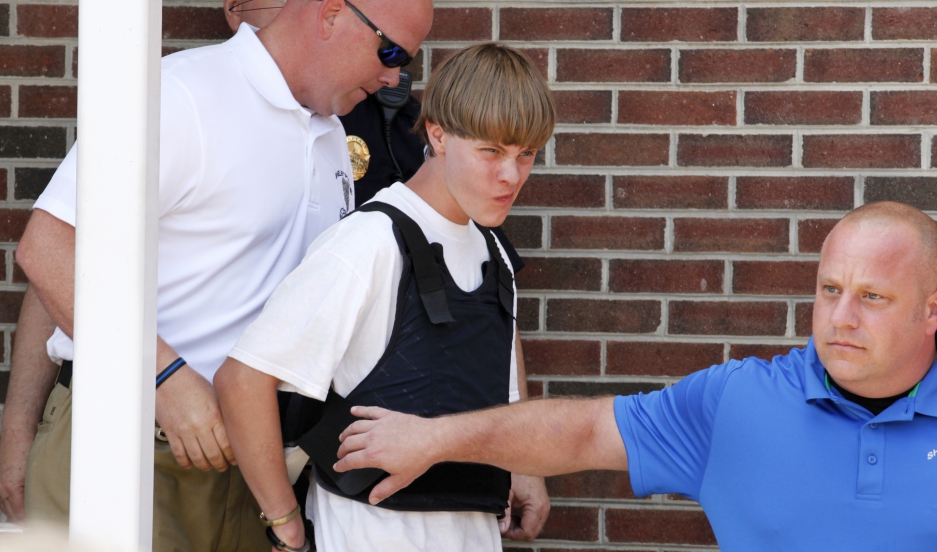 Police lead suspected shooter Dylann Roof, 21, into the courthouse in Shelby, North Carolina on June 18, 2015. Roof, a 21-year-old with a criminal record, is accused of killing nine people at a Bible-study meeting in a historic African-American church in Charleston, South Carolina.

The shooting in Charleston this week that ended with nine people dead fits the textbook description of a terrorist attack. The victims were African American, gunned down at a historic black church. The suspect is a white 21-year-old who was apparently a white supremacist.

“I don’t even think twice about it,” says Juliette Kayyem, a former counterterrorism official at the Department of Homeland Security. “This is a template, essentially at this stage, for terrorism. He says what he’s doing, he says why he’s doing it, he says what he wants the result [to be],” Kayyem says. “Too much ink has been wasted on this question. It is terrorism.”

It is important to accurately label acts of terrorism for a host of different reasons. People in the news media need to be accurate if they want to maintain any credibility. The history of violence perpetrated against African Americans in US history is part of the story and needs to be acknowledged. There has also been a tendency to use the “terrorism” when the suspects are foreign, especially Muslim, says Michael German, a former FBI official who worked undercover to prosecute white supremacists.

“Since 9-11, when people use the word ‘terrorism’, they’re referring only to one type of violence and ignoring the fact that terrorism committed by Muslims is only one piece of the political violence that takes place not just in American society, but around the world,” German says.

“The numbers of people killed by far-right extremists [in the US] typically exceeds any other type of group on an annual basis,” he says.

White supremacist groups remain a persistent threat in the US, German adds. The 1993 bombing in Oklahoma City was the worst terrorist attack on US soil until September 11, 2001. Radical right-wing groups have also tried to obtain weapons of mass destruction.

But German says law enforcement needs to be smart about the way it responds to any and all terrorist threats, and avoid the worst excesses committed during America’s long-running "war on terror." “If we are going to have a counterterrorism effort, it should be focused on the actual people who are engaging in terrorist acts,” German says. “They should be prosecuted to the fullest extent of the law.”

The "terrorism" label can lead to problems in law enforcement, German says. One of them includes going after people who espouse ideologies considered radical. “Once you go down that path, there are a lot of different things [we] don’t agree with. And once people begin to be targeted for their beliefs, when they’re not actually engaged in criminal activity, that hurts our society as well.”

Another take on the word "terrorism"

Should we call Dylann Roof a terrorist?

Federal officials say they are investigating the shooting in Charleston from all angles. "The department is looking at this crime from all angles, including as a hate crime and as an act of domestic terrorism," Department of Justice spokeswoman Emily Pierce said in a statement.

From a legal perspective, labeling the attack in Charleston an act of terrorism could cause problems by making the case against the suspected shooter more difficult to prosecute. “Terrorism charges are sometimes unnecessary,” Kayyem says. In the case of the convicted Boston Marathon bomber, for example, Dzokhar Tsarnaev did not face formal terrorism charges.

“A lot of times, prosecutors do not want to bring cases that require proof of intent,” she says. “If the facts are there, then just bring a factual case. I have no problem saying this is terrorism, but also being very comfortable with this just being a series of murder charges, legally speaking.”