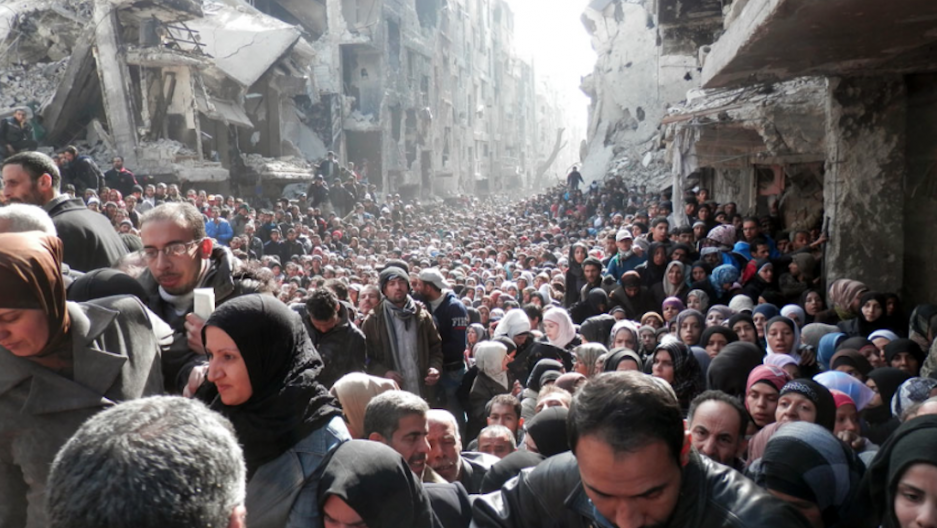 This photo released Wednesday by the UN agency for Palestinian refugees, the UNRWA, shows thousands of men, women and children trapped in the Yarmouk refugee camp on the outskirts of Damascus besieging aid workers as they distribute food parcels. Photo courtesy of UNRWA.
Share

There are more refugees today than ever before in the last 50 years that such records have been kept. According to a report released today by the United Nations, close to 60 million people have fled their homes because of either conflict or persecution. More than half of those 60 million people are children. And that number doesn't include people who are fleeing because of poverty or gang violence or environmental destruction.

These people are people who have left everything behind because they might be killed in fighting between two or more groups clawing for power. Syrians account for the majority of the world's refugees at this point. That's because Syrian President Bashar al-Assad is willing to do anything, kill anyone, to hold onto power. His crackdown on peaceful protesters started a revolution, which led to a civil war in which he leveled whole cities, which created a space for terrorist groups like the Islamic State. Now 7.6 million Syrians are displaced within their own country. Almost 3.9 million have escaped, and are living — if you can call it that — outside the country.

Syria is a relatively new conflict. Other new conflicts are contributing to the staggering number as well, like Yemen and Burundi, where again groups are fighting for power. These groups are often supported by other powers. In Yemen, for instance, an ineffectual president is being supported by Saudi Arabia against the Houthi rebels. Saudi support, in this case, arrives in the form of airstrikes, indiscriminate bombings that have killed hundreds of civilians, forcing many more to flee.

Almost 14 million people were displaced in 2014 alone. That's almost double the size of the population of New York City. Imagine. Imagine bombs falling, bullets whistling. Imagine being scared to leave your house even to find food. Imagine deciding to pack up, take your children, and make your way to the border, only to live out your days in a refugee camp where the threat of rape and disease is ever-present. This is what 14 million went through last year. This is what 60 million people around the world are going through now.

Old conflicts — which have simmered in the face of exhaustion but linger because no one is really prepared to give up — also remain a problem. More than 1.5 million Afghans live in refugee camps in Pakistan, for instance. More than 2.5 million people remain displaced from the Darfur region of Sudan. Sudan's leader, Omar al-Bashir — who has been charged by the International Criminal Court with war crimes, crimes against humanity and genocide — just freely visited South Africa and returned home without anyone lifting a finger.

"I believe things will get worse before they eventually start to get better," UN High Commissioner for Refugees Antonio Guterres said at a news conference in Istanbul.

You'd need a city nearly 10 times the size of New York City to house 60 million people. But that's OK because New York City — and the whole of the United States — is one of the last places any of these refugees will end up. Of the almost 4 million Syrians that have managed to escape, the US government plans to admit just 2,000. And even that tiny number is causing controversy.

Europe is no better. And it might be worse.

More people fleeing across the Mediterranean have died this year than any other year. About 1,750 have drowned so far in 2015. That is 30 times more than in the same period as last year. These kinds of statistics make one ask why. Here is one reason: Italy reduced the number of rescue boats it tasks with patrolling international waters because of public pressure over the expense of the operations. The EU took over. But the EU program is hyper-focused not on the noble humanitarian effort of saving lives, but on border security. The result, according to the International Organization for Migration, is going to be a 10-fold increase this year in the number of people dying.

If the United States is bad and the European Union is worse, Australia is close to evil. Australia makes no secret that its policy is to keep out refugees at any cost. Prime Minister Tony Abbot is using his Navy to tow boats arriving in Australian waters that are filled with hundreds of starving refugees back out to sea, in the hope that they will end up somewhere else. Many of these people end up dying. Now it's been revealed that Abbot's government is actually paying people smugglers — many of who are truly evil people — to take the desperate refugees elsewhere.

So instead, the majority of the 60 million refugees end up in less-developed countries like Pakistan, Lebanon, Indonesia, Iran and Turkey. More than a quarter of the displaced people end up in straight-up poor counties like Ethiopia.

The popularity of palm oil in products we use or eat every day is one of the biggest reasons the world's rainforests are being decimated, which is unleashing untold amounts of carbon dioxide into the atmosphere, which is warming the climate, which is expanding deserts and melting icebergs, which is — in the end — displacing people.

A French minister has one solution: Stop eating Nutella. Yep.

Editor's note: Donors pledged $5.4 billion to Gaza after last summer's war, but only a fraction has been spent on rebuilding. Why? GlobalPost Senior Correspondent Laura Dean wants to find out. We've partnered with Beacon Reader to help fund her investigation. Our campaign is 91 percent of the way there, and today is your last day to help us make up the gap! Can you help us get to 100 percent and make sure this important story gets told? Click here to donate.