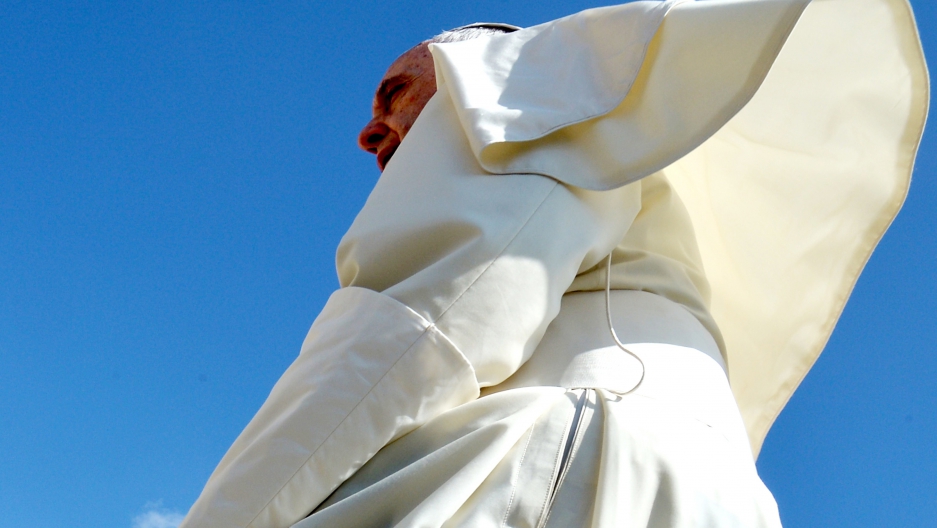 Pope Francis is pictured during a weekly general audience at St. Peter's Square on June 17, 2015 at the Vatican.
Credit: Alberto Pizzoli
Share

ROME — When Cardinal Jorge Mario Bergoglio of Buenos Aires made his infrequent visits to Rome before becoming Pope Francis, he spent little time ingratiating himself with high cardinals, according to various biographers.

He was still green to the balkanized infighting of a Roman Curia that drove his predecessor to retire. But in a little more than two years as pope, Francis has shown himself to be politically adroit — with a refined sense of the moment.

The words that open Laudito Si, the just-released “green encyclical,” also signal a poetic and deeply philosophical turn of mind for Francis.

“The violence present in our hearts, wounded by sin, are symptoms of sickness evident in the soil, in the water, in the air and in all forms of life. This is why the earth herself, burdened and laid waste, is among the most abandoned and maltreated of our poor; she groans in travail,” the document reads.

As the words of Laudito Si spread across a wired world, their impact on the global climate conversation, including the 2016 US presidential campaign, will be enormous.

Catholic Republican candidates Rubio, Bush, Santorum and Jindal — among others who march to the drumbeat of petrochemical industries hostile to environmental regulation — will be forced to either break with climate change denial because of the pope, or paint themselves into a corner as public opinion tilts further toward reality.

“Why would Pope Francis intrude his views on a political situation?” asked Garry Wills, author of The Future of the Church with Francis, in a GroundTruth interview before the letter was released. Wills then answered the question he had rhetorically posed:

“Because they are not simply his views, but those of his namesake, Saint Francis of Assisi, whose attitude on nature was expressed in his famous ‘Canticle of the Sun.’ There, in praising creation, he prays to God: ‘Praise to you for our sister, Mother Earth, who upholds and guides us, and brings forth fruit of all kinds, and flowers of all colors, and herbs.’

While he was in declining health, he sent two of his ‘little brothers’ to sing the canticle to the mayor of Assisi. Was this intruding into politics? If so, blessings on it.”

For the church in America, which has long mirrored the red vs. blue divisions of the body politic, Francis is speaking beyond the polarization. The letter is an impassioned call not to arms, but a collective recognition that we as a species have a moral obligation to others, particularly the generations to come.

Perhaps European reaction offers a lesson to the schizophrenic politics and navel-gazing nature of America’s 24/7 flow of news talk.

“If you are concerned about God, a creator and his creation, then you have to be concerned that his creation is not destroyed," French Foreign Minister Laurent Fabius told Reuters when a leaked version of the letter was posted early in the week by the Italian weekly L’espresso.

Fabius had his political rationale: Paris will host the United Nations Climate Change Conference beginning Nov. 30 — an event that influenced the timing of the encyclical’s release as the Vatican pushes for global consensus.

In passage after passage of his remarkable letter, Francis draws the link between environmental damage and the plight of the world’s poor: “We have to realize that a true ecological approach always becomes a social approach; it must integrate questions of justice in debates on the environment, so as to hear both the cry of the earth and the cry of the poor.”

Perhaps the most striking trait of the letter is that it manifests a truly global vision. The first pope from the southern hemisphere puts forth information to which few people in the comfort of Western democracies typically give much thought:

“The export of raw materials to satisfy markets in the industrialized north has caused harm locally, as for example in mercury pollution in gold mining or sulfur dioxide pollution in copper mining. There is a pressing need to calculate the use of environmental space throughout the world for depositing gas residues which have been accumulating for two centuries and have created a situation which currently affects all the countries of the world. The warming caused by huge consumption on the part of some rich countries has repercussions on the poorest areas of the world, especially Africa, where a rise in temperature, together with drought, has proved devastating for farming.”

There is enough in that paragraph to fuel the climate science denial industry for weeks of opinion pieces and bellowing denunciations.

The disinformation industry that thrives on moments like this will send their petty celebrities into media venues, blasting the pope for not sticking to scripture and the soft cant of inspirational prose.

But larger questions loom. The Pentecostal and evangelical movements in America — and particularly in Latin America — have wedded themselves to a theology of prosperity, a version of Christianity that praises wealth and success as a sign of God’s favor.

What then is the balance between a pursuit of wealth that the Creator approves, and the floods, droughts, earthquakes, tsunamis and typhoons and hurricanes battering the planet? Is God punishing us? Or is the earth in revolt against humankind's dereliction?

Francis writes of a loving Creator, and lays the fault with human beings.

“Never have we so hurt and mistreated our common home as we have in the last two hundred years,” asserts the pope.

Had the Pontifical Academy of Science at the Vatican not gathered climate scientists for a conference as part of the research phase of the document, Rush Limbaugh and the industry of naysayers might have an opening.

But the scientific arguments in the papal letter have already been tested and it is the braying ideologues who stand outside the tent of a common humanity.

“The problem is that we still lack the culture needed to confront this crisis,” states the pope, in what may be the most epic understatement in this brilliant and indeed radical document — radical from the Greek, meaning roots, or first things.

“We lack leadership capable of striking out on new paths and meeting the needs of the present with concern for all and without prejudice towards coming generations,” he writes.

Amen, and let us hope this letter has the impact the pope intends.