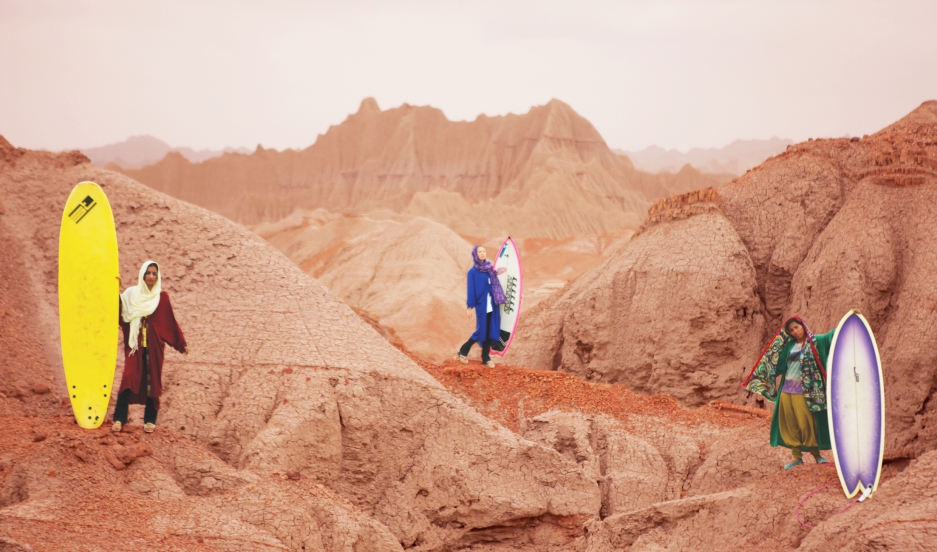 Posing for the "Into the Sea" poster in Baluchistan. From left to right, Shalha Yasini, Easkey Britton and Mona Seraji.

When you think of Iran, you don't necessarily think "women surfing." But one French woman does. In 2010, Marion Poizeau first visited the coastal area of Baluchistan/Chabahar, an Iranian province on the Persian Gulf near the Pakistani border. Her 2013 documentary, "Into the Sea," tells the story of how surfing took hold in the region, and how they and Iranian sportswomen collaborated on the effort to make that happen.

Poizeau and Irish surfer Easkey Briton first went to Iran in 2010. Before arriving, a search on Facebook led them to Iranians Mona Seraji, a snowboard instructor, and Shalha Yasini, a swimmer. Seraji and Yasini joined them and became advocates for the sport in their homeland.

"They are ambassadors for sure, they were amazing. It's teamwork. Because we were this group, it worked," Poizeau says.

Poizeau says it can always be challenging to introduce something new to a country/culture, but Iran has embraced the sport. Poizeau says two things made the effort a success: the waves and the hospitality.

Intrigued by surfing as development around the world?

Check out Waves For Change in South Africa, SurfAid in Southeast Asia and Alto Perú in Peru for more information.

People were welcoming, but they were surprised, Poizeau says. They had never seen surfing before. "Because we were only women in the water, they thought it was a sport for women," she says. "So the men asked us if they could also do it."

One challenge, however, was the clothing. Standard surf-wear doesn't leave much room for modesty, so it was difficult for the Iranian women to find clothing that was both water-friendly and culturally appropriate. The women wore makeshift covers on their heads, even donning heavy canvas ponchos. Now, Poizeau says, she's teaming up with a French-Iranian designer to design wetsuits tailored to the cultural requirements.

What's next? "We really want to have a surf school on the beach," Poizeau says. "It's the most unpredictable project I have ever done, but I wish people are coming and enjoying the time as much as I enjoy when I go there."