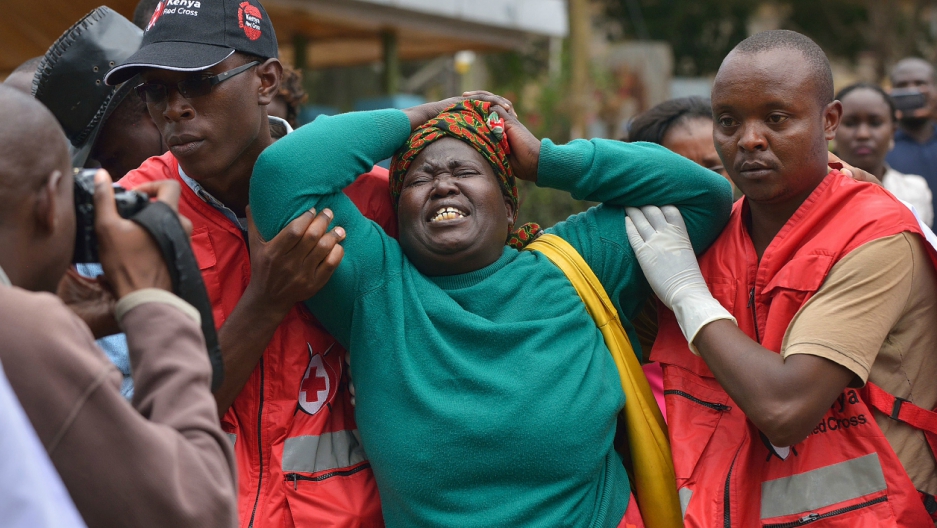 Members of the Red Cross help a relative of one of the students massacred by Somalia's Al Shabaab Islamists at a Kenyan university in Garissa.
Credit: TONY KARUMBA
Share

NEW YORK — Weeks before President Obama visits Kenya, the battle for the future of the country’s civil society is dramatically intensifying.

Both organizations are known for their voluble criticism of Kenya’s police forces and abuses committed in the name of countering terrorism. In early June, Kenyan authorities canceled the groups’ operating licenses, despite a public statement of support from the British High Commission, which represents the British government in Kenya.

“We have seen nothing to be concerned about regarding these two organizations. We have also asked for evidence but nothing has been given to us,” said a high commission spokesperson.

The authorities’ assault on Kenyan NGOs isn’t new. LGBT groups and those that expose police violations have been targeted. Deepening the crisis has been the government’s delay in implementing the 2013 Public Benefits Organizations Act, which regulates civil society.

The government attacks come just before President Obama’s visit at the end of July for the Global Entrepreneurship Summit; they threaten to dominate his trip.

In response to the latest attacks against human rights activists, US Ambassador to Kenya, Robert Godec, wrote a strongly worded column aimed at Kenyan authorities. “I have followed closely the ongoing debate in Kenya around civil society and its regulation … Regulation should not be used to silence opinions or stifle views that the powerful do not share.”

Godec didn’t mention Muhuri or Haki Africa by name, but his pointed language contrasted sharply with US ambassadors serving in the Gulf and elsewhere. Their failure to offer public support for civil society has damaged American credibility with the people of Saudi Arabia, the United Arab Emirates, Bahrain and beyond.

Civil society “helps counter violent, extremist ideologies,” he said. “Counterterrorism is most effective when governments involve local voices and communities, and civil society is a critical ally in this effort. As Kenya continues to face difficult security challenges, the government should partner with civil society to find solutions.” This escalation of the diplomatic debate increases pressure on the Kenyan government in the runup to the Obama visit, which is turning into a major test of the president’s Countering Violent Extremism initiative. If the White House can’t help persuade allies like Nairobi to adopt a more comprehensive approach to fighting terrorism — one that includes rather than targets civil society and government critics — the much-trumpeted Countering Violent Extremism project will have failed.

The Kenyan government is organizing its own Countering Violent Extremism conference at the end of June, billing it as “as a follow up to the February 2015 White House Summit" in their official announcement. While agenda topics include “Effective Partnering in Combating Violent Extremism” and “Understanding the Architecture and Dynamics of Radicalisation and Recruitment,” its response to terrorism thus far has too often been to attack legitimate peaceful dissent, which risks fomenting the extremism it’s supposed to combat.

"This year alone around eight people have been shot in peaceful protests, in violation of their constitutional rights. Another urgent issue is addressing the electoral reform. The two past elections, in 2007 and 2013, were hotly disputed and … we still don’t have the final vote tallies. If we don't have electoral reforms before 2017, there is high likelihood of more politically motivated violence,” warned Mwangi.

More Kenyan political violence is the last thing the country, the region and the United States needs. Washington wants a stable Kenya that can be trusted to fight terrorism effectively. The best way to get that is to stop the Nairobi government from smothering its civil society. Obama knows that, and shouldn’t shy away from saying so publicly when he’s there.

Brian Dooley is director of the Human Rights Defenders program at Human Rights First. Follow him on Twitter at @dooley_dooley.