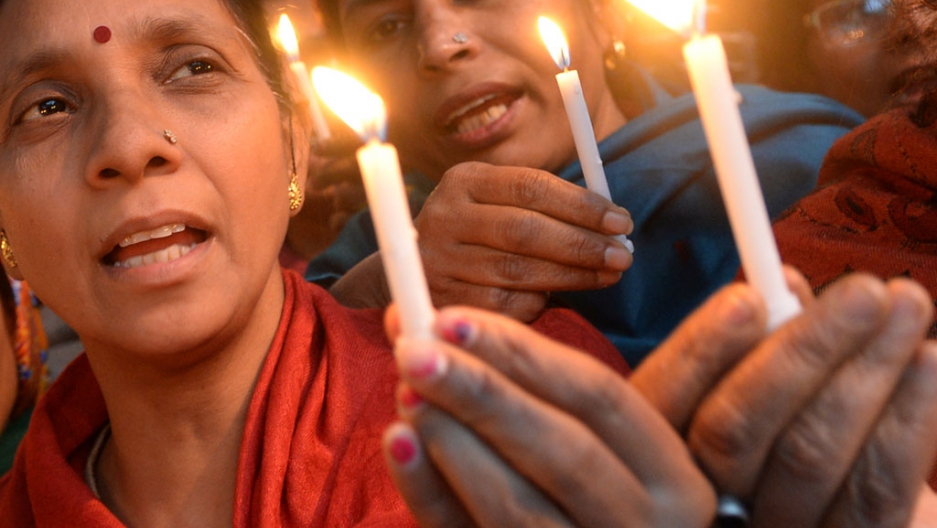 On Dec. 29, 2013, India marked the first anniversary of the death of a student savagely gang-raped on a Delhi bus.
Credit: SAJJAD HUSSAIN
Share

NEW DELHI, India — Nearly three years after a gang rape that appalled the world and forced India to drastically revise its policies on sexual assault, experts say there are still huge gaps that allow forms of rape to go unpunished.

The outrage over a Delhi government circular released last week, then quickly retracted, revealed the extent to which anti-rape measures are still sorely lagging. The 14-page memo, sent to hospitals in and around the capital, instructed doctors that they could still perform the “two finger test” on rape survivors, a practice banned by the Ministry of Health last year after the Supreme Court deemed it “cruel, inhuman, and degrading.” The test, which involves checking for a hymen to determine sexual activity, has been cited by defendants to claim that a woman consented to rape. Most infamously, the Supreme Court accepted this argument in the case of two policemen who raped a fourteen-year-old girl in custody for planning to run away with her boyfriend. In the opinion of the court, her “habituation” to sex meant she may have seduced the policemen.

Although such cases should theoretically no longer occur, as the “habituation” defense is banned, women’s organizations believe this reasoning continues to be used in parts of the country as a means to defend rapists. According to the Mumbai-based Centre for Enquiry Into Health and Allied Themes (CEHAT), medical reports of rape victims are riddled with forensic biases that reflect this attitude.

“Biases — like a well-built woman cannot be raped against her will, the hymen status is critical to determine rape, and that genital and physical injuries are an essential ingredient to conclude rape— continue to exist,” said Sangeeta Rege, a Senior Researcher at CEHAT.

Not to mention that under Indian law, marital rape and the rape of men and transgender people don’t exist. These forms of rape are widely dismissed in India, a traditionally patriarchal country in which a woman’s rights over her body and alternative sexuality are considered irrelevant.

On April 29, 2015, responding to a question in the Indian Parliament, Haribhai Parathibhai Chaudhary, a minister in the Ministry of Home Affairs, said “it is considered that the concept of marital rape, as understood internationally, cannot be suitably applied in the Indian context.” He cited poverty, social customs and values, religious beliefs and the treatment of “marriage as a sacrament” as justifications of this view.

Victims of marital rape can seek recourse under the Protection of Women from Domestic Violence Act, which includes sexual abuse as a form of intimate partner violence. However, unlike rape, the assault would not be considered a criminal offense, which means the offender could not be imprisoned or prosecuted.

“If you don’t recognize something as a crime in your law, the signal that it gives to society is that we don’t think this is prohibited conduct,” said Vrinda Grover a prominent rights lawyer who was on the panel that banned the two-finger test. “We are not otherwise a society which looks upon sexual violence against women, violence against men as wrong.”

The lack of legal recognition adds to an already complex picture when it comes to the rape of men. The rape laws in India are not gender neutral.

The sole recourse men have for reporting rape is to file charges under Article 377, a controversial section of the Indian Penal Code which criminalizes “unnatural offenses.” As consensual and non-consensual sex is not differentiated, this section criminalises gay sex in India, and has been the focus of large-scale opposition by LGBT groups.

“It is very complicated to invoke a provision which is so pernicious it actually stigmatizes an entire community of people,” said Grover.

The Naz Foundation, a LGBT rights and health NGO, moved the Delhi High Court to revoke Section 377, as it was hindering the Foundation’s efforts to combat HIV by driving gay men underground. But in 2013, the Supreme Court reinstated the article, criminalizing “unnatural offenses” again.

“With 377 in effect, there cannot be a record of the rape of men, as rape is not differentiated from consensual sex,” said Prince, a counselor at the Naz Foundation.

This also allows for a high incidence of custodial rape, where men in prison are sexually assaulted by policemen, according to Grover. “There are many incidences which are revealed of men being tortured and sexually abused, and more often than not these men will belong to religious minorities, tribal communities, political dissidents, or lower castes,” she said.

Even boys below the age of 18 only came under the ambit of a new Protection of Children from Sexual Offences Act in 2012. Before that, only girls could be recognized as victims of rape, and minor male victims had to charge assault under “unnatural offences.”

While the Indian Constitution does provide a right to life with dignity, the country continues to fail survivors of sexual assault by ignoring consent—making rape possible under the law.