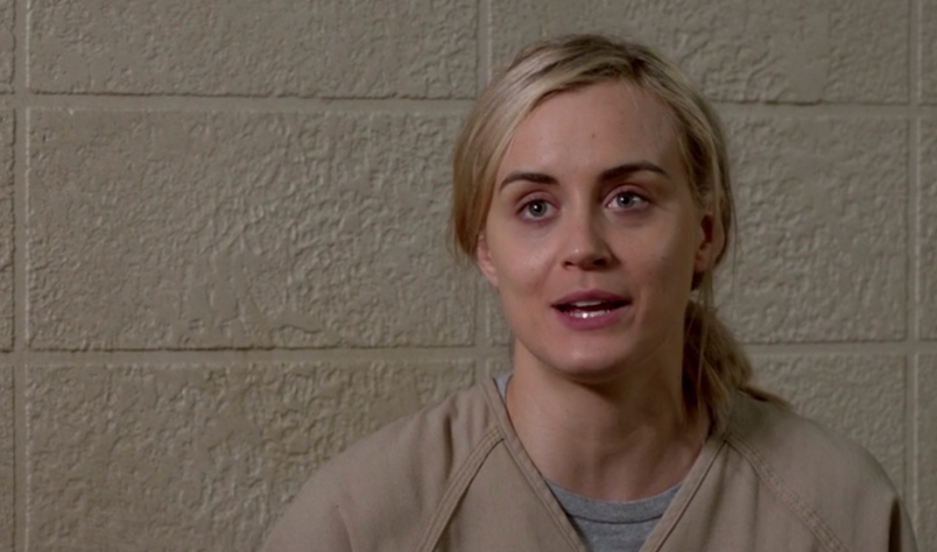 Actress Taylor Schilling as Piper Chapman in "Orange is the New Black."

This week it was brought to our attention that The World was name checked in the new season of the Netflix series “Orange is the New Black.”

For the unfamiliar, the show’s main character is named Piper, and she ends up in federal prison. She always seems to be saying the wrong thing, like in this argument with Red, the Russian prison cook, in which she references the Korean word “kibun.” Watch the clip here:

The World does do stories about obscure words, particularly in our podcast The World In Words. While we’ve covered the Korean language on occasion, we checked, and it turns out we’ve never done a piece about the word kibun. So we thought this would be a good opportunity to rectify that.

“A lot of people talk about it as one of those untranslatable words. It’s something that’s very Korean,” explains linguist Arika Okrent, who writes about language and etymology for Mentalfloss and The Week.

Translated directly, kibun means “mood," but there’s more to it than that — the word is closely associated with ideas about social harmony or good vibes, and the effort to not disrupt someone’s vibe by letting them save face.

“There is a tight connection kibun is supposed to have with a person’s personal sense of prestige, status,” Okrent says. "Their place is the world. So it’s not just whether you are grumpy or cheerful. It’s your state of mind with respect to your place in the world.”

Kibun is referenced frequently in advice books about how to do business in Korea, and is particularly important when dealing with figures of authority, like your boss.

Okrent mentions one well-known workplace scenario: If your boss is in bad mood, it might not be a good idea to bother them in their office with some trivial concern, or yet more bad news. It could turn into a “shoot the messenger” scenario, she explains.

The concept of kibun takes this a step further. Respecting you’re boss’s kibun wouldn’t just be about not making her grumpier, but it also carries with it an obligation to be sensitive to her mood, or to not insult her by being an “agent of mood disruption,” as Okrent put it.

“So we’ll do everything we can do to let him save face by sparing him this insult of disrupting his mood," Okrent says. “If that means keeping important information away from him, or lying about it, that’s just what you have to do to keep the good vibes going."

Kibun is used in both Japanese and Korean. Its origin is unclear, but it appears to have more cultural importance in Korea.

Asked to use it in a sentence, Okrent’s example will likely sound familiar to many:

Turns out we seriously harshed some of your kibun, with our mispronunciation of the word.  There should be no stress on either syllable. The World's Nina Porzucki attempts to right this wrong. She spoke with Roh Jaemin, the head of the Korean Language Program at Boston University about the correct way to say kibun.