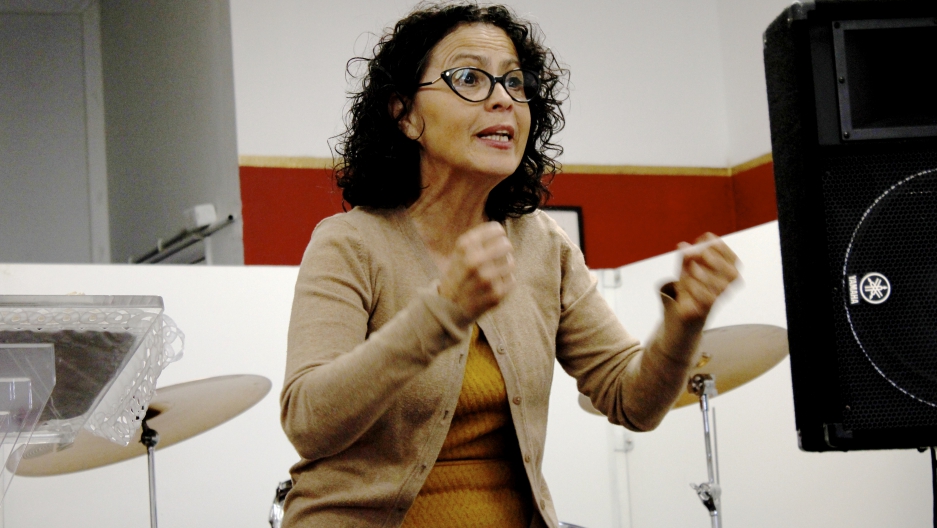 Margarita Monsalve, preaches to her congregation in Torrance, California. Monsalve fled violence in Colombia more than 25 years ago for the United States, and now helps migrant girls and their guardians support themselves by sewing garments.
Credit: Phoenix Tso
Share

TORRANCE, California — On a hot Sunday morning in the Los Angeles suburb of Torrance, a diminutive preacher in a mustard cardigan furiously paces the brown carpet of the altar at her storefront church, Navegando con Jesus — Sailing with Jesus.

“Christ is alive! Christ is alive!” Margarita Monsalve shouts to the parishioners. When she isn’t moving, the preacher looks prim in her fitted cotton dress, retro eyeglasses complementing her curly hair.

Then, using all of her arms to gesture to the ceiling, she seems to grow much larger: “You have to suffer in this life to go to paradise,” she intones. Her congregation calls out, swaying in movements familiar inside any evangelical church. One man dances in the aisle.

Almost two hours later, the service ends. The congregation pours out onto the sun-drenched sidewalk, and a small group of women led by Margarita heads down the street. They are unaccompanied child migrants from Honduras, Guatemala and El Salvador who have escaped to the United States, along with their guardians. The girls are often the survivors of sexual assault, death threats and other forms of violence that have plagued the three “Golden Triangle” countries since the 1970s.

Margarita supports both the girls and the guardians, organizing a sewing circle funded by donations.

Inside a dimly lit room sit rows of sewing machines, thread strung between them. In the back of the purple-and-green room, bolts of colorful cloth are stacked high. The women gather at the front, chattering excitedly. There’s a plastic table and a couch, where a few settle down, while others arrange a cake, soda and paper plates and plastic forks.

The circle of seamstresses is making skirts that will be shipped to women in Kenya. The women select the pattern and the cloth from the bolts in the back, then cut the right size.

“It’s a workshop that I started when all the women from Honduras arrived from the humanitarian crisis,” Margarita said. “They arrived here and upon seeing their need, and our need too, I started to teach them to sew and so we got machines and started to train them.”

Margarita herself escaped to the US from Colombia in 1989.

From a prominent industrial family in Medellin, she fled with her husband, son and daughter after guerrillas made death threats against them. They killed her brother-in-law with a letter bomb he had hoped was information about his kidnapped wife.

Margarita and her family spent a decade trying to gain permanent residency in the US, a saga involving shifting immigration laws, deportation notices and a son who moved to New Zealand to attend college.

Now legally in the US on a religious worker visa, Margarita attends the immigration hearings of the unaccompanied girls in her congregation, and helps them gain financial independence.

“What drives me to help them is when I start to dig deeper into the story of each of them,” she said. “When I start to see all these women: mothers, daughters, wives, but above all human beings that are coming here in the same circumstances that I have found, in the difficult moments that they are confronting and I as a woman, mother, grandmother, daughter, sister, I identify with them.”

One of the sewing collective’s members is Maria Balvina, a tiny woman with long silver hair, who is guardian to many of the unaccompanied girls in Margarita’s congregation.

Her small hands work fast as they thread the string through the machine, then feed the fabric through. Her right foot keeps time as it pumps the rusty, squeaky pedals. Margarita oversees her progress, placing a supportive hand on Maria’s shoulder as she cuts fabric. Beaming, Maria holds up the finished skirt with an Eiffel Tower pattern.

In this way, sewing has a healing affect for these women, after lives of chaos and trauma in Central America and en route to the US.

“When I come here, I come to relax,” said Maria Cristina, a member of the collective and one of the girls under Maria Balvina’s guardianship. “When we come, we come to sew. We come to help Margarita. And yes one relaxes a lot because being so enclosed in the house like that that one gets depressed.”

The younger Maria fled to the US last year after death threats were made against her and her sister. The journey was one of almost unending hardship. At one point, when the bus she was on broke down in the desert, she had to travel on foot for five hours. Her hands and feet bear prominent scars from the journey.

At a party for Maria’s 27th birthday, she wears a pink silk blouse with matching pink eyeshadow. The adult women in the church group caress her shoulders as tears run down her face. Everyone sings “Happy Birthday.” They pass around pieces of red velvet cake and scoops of vanilla ice cream.

Maria’s trauma is typical of that suffered by many girls and young women from Central America. In El Salvador, Guatemala and Honduras, drug cartels and local gangs target the youths with violence and threats. National and local governments offer minimal protection.

As a result, people like Maria see few alternatives but to escape to the north.

Unlike many of them, however, with Margarita she has found her livelihood.

“I have looked for work and haven’t found it,” she says. “This is the reason I live disappointed with this country because there is no work. And so the pastor has helped us a lot.”

In church that morning, the younger Maria came in with Maria Balvina, who has been living in the US for 30 years. After gangsters killed two of her sons, Maria Balvina journeyed to the US to ensure the survival of her remaining children.

Recently, she has taken in six unaccompanied girls, all distant relatives in need of food, shelter and legal assistance. These girls have experienced rape, death threats and abuse, sometimes within their own families.

“I sewed back home,” Maria Balvina says. “Then I brought my own machines here, so that I could make a living.”

“In this way you earn your own money because you go about depending on other people, that is not an option,” Maria Cristina says.

The sewing circle also provides these girls with a community that they otherwise wouldn’t have in the US.

At Maria Cristina’s birthday celebration, Margarita and the other women tell her how much they love her, how they’re there for her on her first birthday away from her Honduran family, who have scattered across the globe this year because of the danger they faced back home.

“The love that they never had they found here in the workshop,” Margarita said. “It gives them therapy and hope. Here there is another life, a hope in all this suffering that they have had in life.”