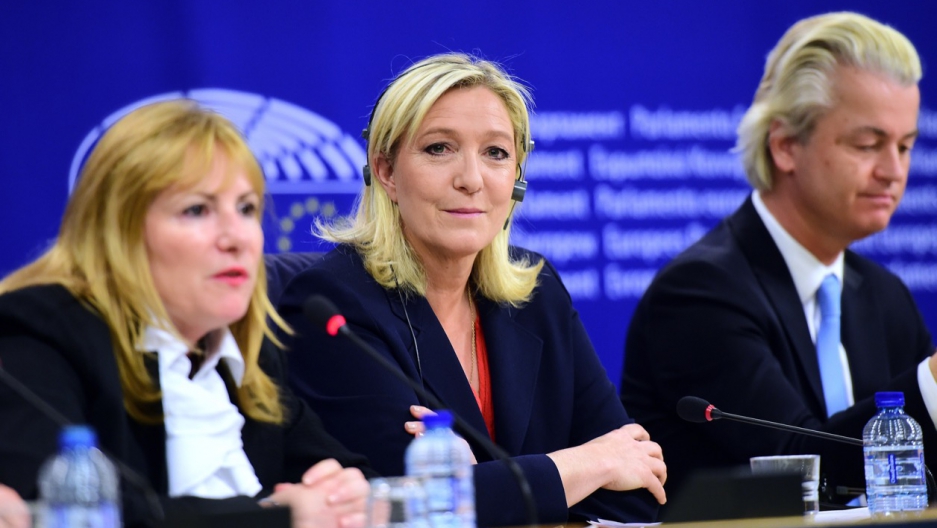 BRUSSELS (Reuters) - Marine Le Pen, Geert Wilders and far-right leaders from Italy, Austria and Belgium finally combined to form a common bloc in the European Parliament on Tuesday, a year after a Eurosceptic surge in EU elections.

Splits among parties opposed to the EU and mass immigration, which won 12 percent of seats last May, saw the UK Independence Party form one alliance but Le Pen's French National Front (FN) and Wilders' Dutch Freedom Party (PVV) short of members needed to qualify for powers and funding that come with bloc status.

A key hurdle was a need to include lawmakers from seven EU states. Le Pen, who will lead the new Europe of Nations and Freedom bloc, said that the hurdle was now overcome with the involvement of two Poles and British member Janice Atkinson, who was expelled from UKIP over an expenses scandal in March.

"The European Union is working to destroy the nation and we are here to defend our people," Le Pen, whose group will feature 39 of the chamber's 751 members told a news conference. Wilders said the bloc would fight the "Islamisation" of Europe.

More from GlobalPost: The scary return of a radical, far-right Europe and what it means

Despite vocal minority groups, the bulk of European legislation is passed by coalitions of big mainstream blocs.

The new bloc comprises the FN, PVV, Italy's Northern League, the Austrian Freedom Party (FPOe) once led by Joerg Haider and the Flemish nationalists of Belgium's Vlaams Belang, along with Poland's Congress of the New Right (KNP) and Atkinson.

Hungary's Jobbik and the Greek Golden Dawn, with three seats each, are now the main far-right parties not in a united group.

Parliamentary groups are accorded significant political and financial benefits, with campaign funding, committee chairs and a larger role in the management of parliamentary business.

Atkinson, whose chief-of-staff was recorded by a newspaper asking for an inflated restaurant bill in order to claim expenses from the European Parliament, told the news conference she would fight for her constituents to "get our country back".

The European Network against Racism complained the new bloc would receive more public funding to promote their ideas. It said: "This should set alarm bells ringing for mainstream parties to finally end the escalation of toxic narratives."