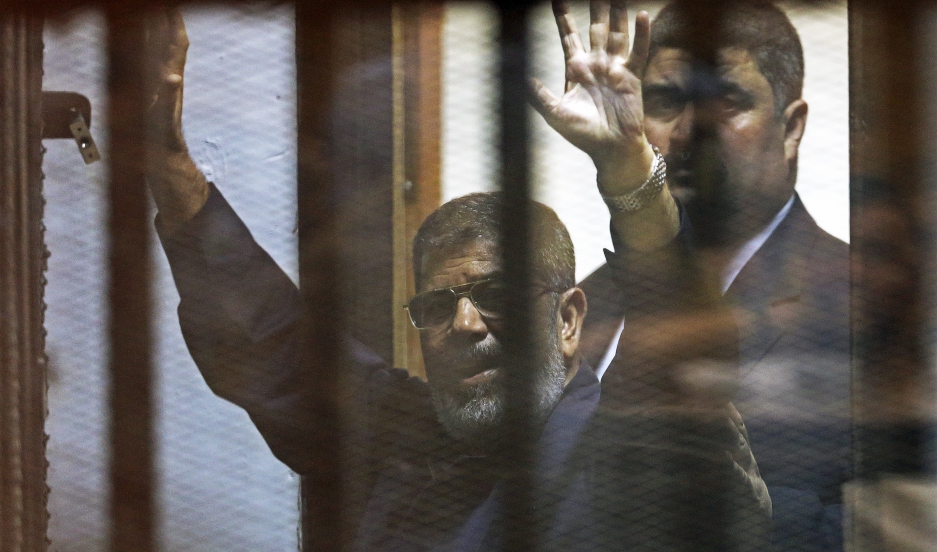 Deposed Egyptian President Mohamed Morsi greets his lawyers and people from behind bars after his verdict at a court on the outskirts of Cairo, Egypt on June 16, 2015.

Egypt had a lot to celebrate a few short years ago. Millions of Egyptians captivated the whole world’s attention when they took to the streets in January 2011 and, in less than three weeks time, they brought down a dictator who had ruled over their nation for three decades.

On the day Hosni Mubarak resigned, President Barack Obama called it a special moment in history.

“The people of Egypt have spoken, their voices have been heard, and Egypt will never be the same,” Obama said. “Egyptians have made it clear that nothing less than genuine democracy will carry the day.”

Indeed, when the voters chose Mohammed Morsi as their president in mid-2012, even those with misgivings about Morsi as a candidate and the Muslim Brotherhood political organization that supported him could take some heart. This was Egypt’s first free presidential election and that was seen a sign of progress.

But Morsi’s tenure in office soon turned bitterly divisive. In 2013, massive protests preceded a military coup that ousted Morsi and put him in prison. Hundreds of his supporters were subsequently killed by security forces. The Muslim Brotherhood was designated a terrorist group and its leaders were systematically rounded up and jailed.

Morsi is being accused of involvement in a 2011 prison break and of conspiring with foreign groups, including the Palestinian militant group Hamas, to commit acts of espionage against Egypt. He is serving a 20-year prison term for ordering the arrest and torture of demonstrators while serving as president. Dozens of other suspected Islamists are facing death sentences.

The ex-president is expected to appeal his case, which could take years to reach a conclusion. Any death sentence would also have to receive final approval from Egypt’s Grand Mufti, the country’s most influential Muslim cleric.

The leadership of the Muslim Brotherhood in Egypt has effectively been driven underground by the government’s crackdown on dissent, says Borzou Daragahi. The veteran Middle East correspondent says, “it’s members and sympathizers are hunted and put into jail. They are purged from public life. There’s really a witch hunt against the Brotherhood right now.”

“Brotherhood leaders who are not in jail are mostly abroad, in Turkey, Qatar or the United Kingdom, where they try to direct efforts here [in Egypt] and offer some sort of guidance. But it’s really mostly just rank and file sympathizers going out after Friday prayers to hold demonstrations, flashmobs really, before they’re dispersed by security forces,” Daragahi says.

The atmosphere for Egypt’s political opposition feels more repressive than during the days of the Mubarak regime, adds Daragahi, who wrote about the case of a 23-year-old university student allegedly killed by security forces in an extrajudicial murder.

“This case made some headlines,” Daragahi says, “because it was so gratuitous. But there are … scores of people who are just disappearing into the prisons, into what some are describing as ‘black sites’, … undeclared prisons. Or they’re just ending up dead.”