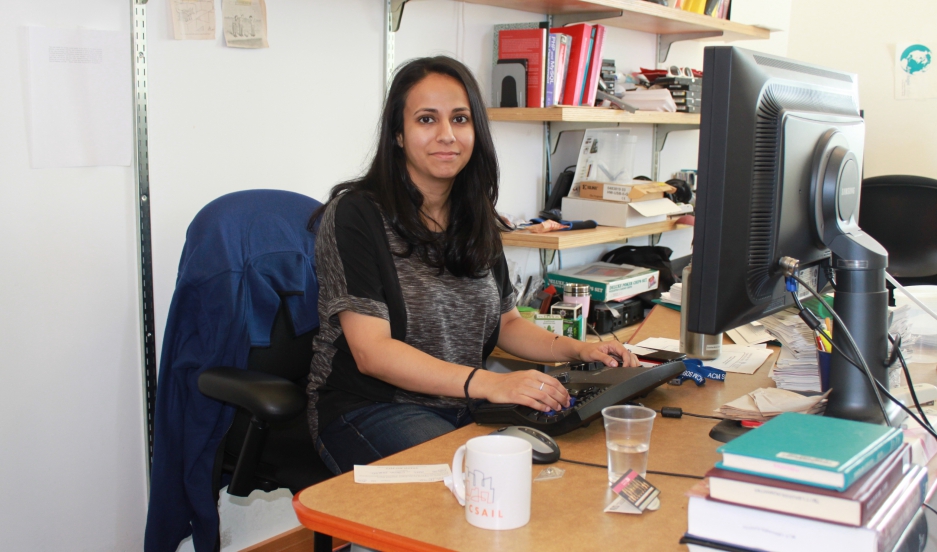 Neha Narula just finished her PhD at MIT. She says early mentoring was essential to her career in computer science.

Neha Narula wants to be known for her work, not her gender. But she often wishes there were more women around. She just finished her Ph.D. at MIT, and her area of interest, distributed systems, is one of the most male-dominated in computer science. (For those in the know, she's in the PDOS group at MIT CSAIL.)

“I have always been either the only woman in the group or one out of two women. For a little while there were three,” she says.

Narula works on databases, data storage and trying to make difficult-to-use software easier for the rest of us. And she loves it. But the culture gets to her sometimes.

It's not just the absence of women. It's not just the trolling that Narula and other women sometimes endure. It's the conferences where she feels invisible, the aggressive culture of criticism, the displays of dominance.

“There have been points in time when I thought I don't want to do this anymore,” Narula says. “This is hard. This is not enjoyable. I don't like the interactions that I'm having. I don't want to be in this environment anymore.”

But Narula has found ways around it — and says she’s glad she stuck with it.

“To be an example. To show that you can do it. It’s possible. It’s doable. And if you really like this stuff you should do it. You shouldn’t give up.”

Narula grew up in Alabama and Illinois. She went to a math and science high school. “I was a very nerdy little girl,” she laughs. “I had big glasses, and really long hair, and braids.”

She’s the daughter of Indian immigrants, both doctors, and education was always a priority. But when she went to Dartmouth, she intended to leave math and science behind and focus on international relations.

Narula laughs again. It wasn’t to be. Math and science kept tugging at her. “It wasn't just that I missed it,” Narula says. “I missed the people. I missed that kind of mind set.”

Narula says the mentoring she received at Dartmouth has been key to her success. One professor in particular, Tom Cormen, stood out.

“Tom was always willing to talk,” Narula says. “He really, really cared about his undergraduate students. He cared about them tremendously.”

“I definitely do it consciously,” he tells me in his office at Dartmouth. “There are students who might be wondering if it's really the right thing for them, especially if they're from a group that's underrepresented in computer science, if they look around and don't see faces like theirs.”

Cormen says back when he was an undergraduate, studying computer science he knew there was a gender gap, but he didn't really care. Later, in graduate school, a female colleague opened his eyes to how bad it was. Ever since he started teaching, he's been trying to recruit women to computer science.

And he does it relentlessly, something that women in the sciences and related fields say is of the utmost importance — and often lacking. He emails female students; he talks to them after class; he recruits them to be teaching and research assistants. He once asked Narula if she wanted to co-author an instructor’s manual for a textbook he wrote.

“Unfortunately she was unable to participate at the time,” he says. “But I think being invited made her realize, ‘Hey, you've got the chops here.’”

Cormen is still at it. Graduating senior Patty Neckowicz says he’s good at picking students who will do well as computer science majors. He worked with her and now she’s off to a programming job at Amazon.

“The way he reached out to me was unique,” Neckowicz says. “But now I see him doing it with other students, I see how I was back then. He definitely makes you feel comfortable, reinforces that you're good at this. I think a lot of girls might not get that.”

Tom Cormen is proud of the work his department does to encourage young women. His colleague, Lorie Loeb recently won a mentoring award for her work with students in the Digital Arts Leadership and Innovation Lab. And the percentage of computer majors who are women is well above the national average. Even so, women still make up less than a third of those majors. And only two of the 20 tenure-track faculty in computer science are women.

“It can be dangerous sometimes to think too much about gender,” she says. “You start to think you’re being given special treatment, that you don’t deserve the accomplishments. But at the same time, there are differences in the way people need to be mentored and encouraged. That’s definitely true for me. Without having mentors at an authoritative level saying, ‘You deserve this sort of experience; you should apply for this program, because you’re strong enough; those are the sorts of things I wouldn’t necessarily have done without a strong mentoring voice to push me.”

Whiting says she wants to keep those differences in mind as she embarks on her teaching career. But she also wants to train herself and others not to need too much extra encouragement. Neha Narula tells me something similar when I ask what advice she has for young women starting out.

“There's going to be a lot of micro-discouragements along the way,” Narula says. “So my advice would be: Don't worry about what people think of you, or what people think you should be doing. Just pursue what you enjoy. And pursue it as hard as you can. And do what you need to do to make it happen.”