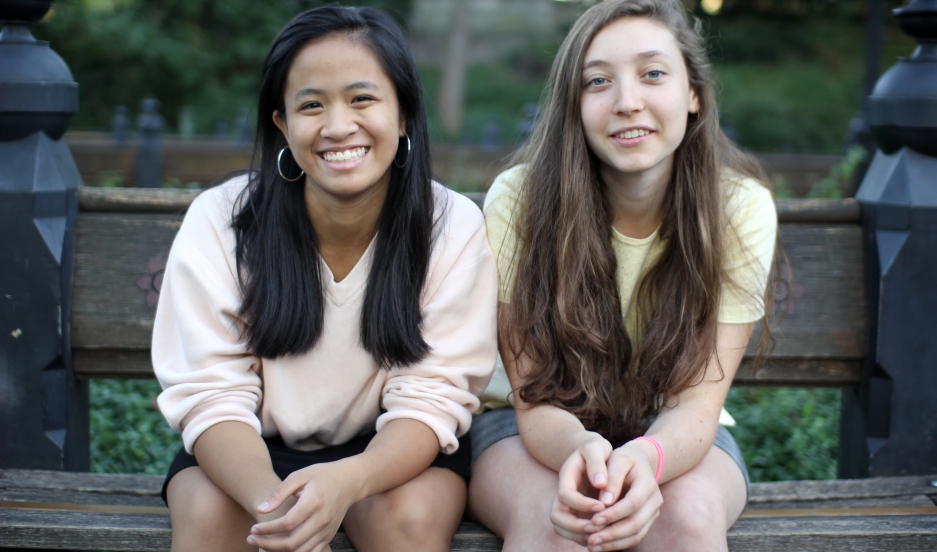 We spoke to Sophie Houser, 17-year-old New Yorker, Girls Who Code alum and co-creator of Tampon Run about women in STEM, the stigma around menstruation and how her 8-bit creation is disrupting both.

Across Women's Lives: How and why did you become interested in coding?

Sophie Houser: I became interested in coding last summer when I participated in a Girls Who Code summer immersion program. My mom encouraged me to apply because she knew I liked being creative and math. She saw coding as the intersection of the two.

AWL: What was the first thing you ever coded?

Sophie: The first thing I ever coded was a black square that showed up on the screen. It was exhilarating!

AWL: What’s the biggest, craziest thing you would like to code one day?

Sophie: I think using tech to connect people is really exciting, so I'd love to build something that does that in some way. I also think coding a robot that mimics humans — has emotions and thoughts — would be super cool.

AWL: Tell me about Andy [Andrea Gonzales], your GWC partner and Tampon Run co-creator. How did you meet and start working together?

Sophie: We met in July in the Girls Who Code summer program. It was Andy's third summer coding and my first. We have a really good time together. I feel so lucky to have a partner in this Tampon Run adventure, especially one I get along with so well.

AWL: How did you two come up with the idea for Tampon Run?

Sophie: Andy and I both wanted to make a game with a social message for our final Girls Who Code project, so we teamed up. She originally wanted to make a game that targeted the hypersexualization of women in games. But while brainstorming I jokingly suggested we make a game where someone throws tampons. That spurred a conversation about our own experiences with the menstrual taboo. We also did some research and learned that the menstrual taboo is a much more serious issue in other parts of the world. At that point, we knew we had to make the game.

AWL: How conscious of the stigma around menstruation and periods were you before you made the game? Do you think Tampon Run can help get rid of it? What can?

Sophie: We were aware of the stigma through our own experiences. The first time I got my period I was too embarrassed to go the store and buy tampons myself because I didn't want to even look the cashier in the eye. Many of my girl friends said they had had similar situations. Also, my guy friends and I are very open with each other, but whenever any of us started talking about menstruation they would say "ew" and either change the subject or walk away.

In the months since Tampon Run came out, they've become so much more open about discussing menstruation. I've even become much more comfortable talking about my period and noticed that my friends and I discuss it more openly and with more pride. We hope Tampon Run spurs thought and discussion around the taboo. The more we talk about menstruation, the less taboo it will be.

AWL: What was the Girls Who Code experience like?

Sophie: I loved my summer at Girls Who Code! First, I had never been in an all-girls program. I loved collaborating with the 19 other girls. I also loved learning to code because I found it empowering. It was empowering because I got to build something from nothing all myself. It was also empowering to fail over and over again and then finally succeed and see my program run.

AWL: Besides great programs like GWC, how do you think that we as a society can encourage girls and women to go into STEM and the world of STEM to embrace them/promote them/not discriminate against them?

Sophie: I think having female role models in the field and female mentorship is so important to encouraging girls to enter the industry. It's hard to imagine yourself doing something if no one like you is doing it.

AWL: Have you experienced sexism in STEM?

Sophie: I've been lucky enough not to have felt extreme sexism in the field personally. Although Andy and I have both experienced telling people we're into coding and getting surprised responses. Like people don't expect us to be into STEM.

AWL: What advice would you give a young girl who wants to go into coding/tech, but doesn’t know where to begin/doesn’t feel supported?

Sophie: I would tell her to just try it out because coding can be so fun and rewarding. Although there might not be many women in STEM, every one of them we've met is open, inviting and encouraging. It's a great community. There are Women Who Code groups around the world that bring women who code together to meet for talks and presentations. I would see if there's one near you. I would also recommend seeing if there's a Girls Who Code program or club near you. There are also online tutorials.

AWL: Thank, Sophie! Any other thoughts on women in STEM?

Sophie: I'm so happy I learned to code! I was interested in history, English and photography before last summer and now I'm planning on majoring in computer science in college. Learning to code made me a more confident person because I realized that I had the power and ability to build anything.