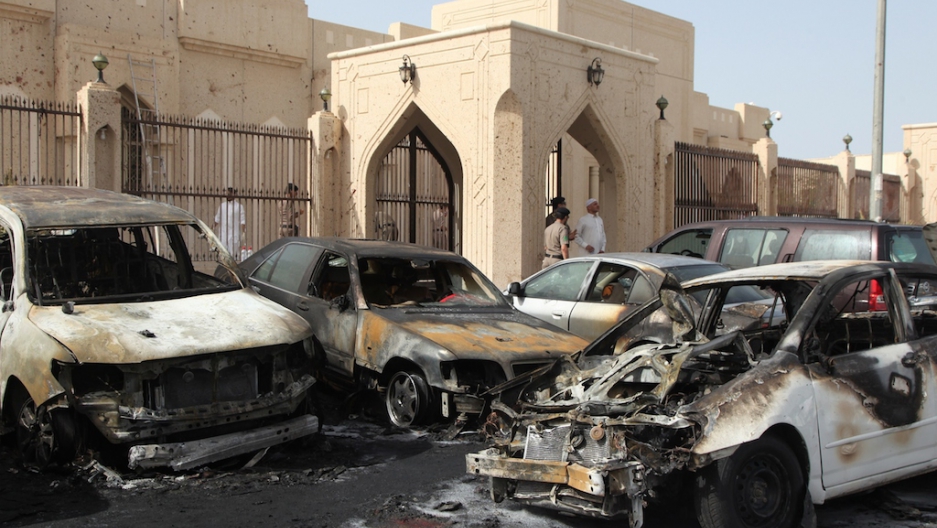 Saudi security forces inspect the site of a suicide bombing that targeted the Shiite Al-Anoud mosque in the coastal city of Dammam on May 29, 2015.
Credit: Stringer
Share

RIYADH, Saudi Arabia — As Saudi Arabia tries to unravel a string of recent, small-scale terrorist attacks, authorities are turning their attention to radicalization at home.

Over the last eight months, Saudi Arabia has arrested 1,059 men with alleged ties to terrorist groups, including local cells of the so-called Islamic State (IS). Last month, suicide attacks in Shia mosques in the provinces of Qatif and Dammam left 25 people dead. In November, 11 people were shot dead by masked men in a Shia neighborhood in Al-Ahsa.

Nearly all of the suspects named in recent assaults have been Saudi citizens or residents. Attackers have often liaised with IS, either in Iraq or Syria, to plan the assaults, but the violent work has been undertaken by locals.

Some are educated and wealthy, others desperate and unemployed. There is no one type of person who authorities in Riyadh say is most vulnerable to radicalization.

Yet conversations with several former Saudi radicals reveal patterns in how the transformation unfolds. Many of the recruits are young — between the ages of 18 and 25, according to the Interior Ministry — though tales of 30-somethings can also be found. And as it is elsewhere, most recruitment is now happening online.

The first step is to encourage an individual to retreat from their usual lifestyle. One 27-year-old Saudi recounted how his life changed after he was drawn to an extremist mosque across town. “Before, I would never go out, just to school and then back to watch TV,” he told GlobalPost in May. “After [I started to radicalize], I was thinking that I must pray regularly. I was going to a mosque that was very far away, and I would stay there a long time. I even skipped eating with my family to attend lessons at the mosque. Sometimes I wouldn’t go to school, I would just go pray.”

This isolation from society is key to the process, says former Al Qaeda member-turned-MI6 informant Aimen Dean, who is now head of Five Dimensions Consultants in Dubai. “After they suddenly disappear from their former life of night clubs or after work drinks, they become isolated with online peers. That leads to persecution complex — 'I’m persecuted because I’m Muslim,'” Dean told a small group of journalists in Doha earlier this month. “This leads to final superiority complex: [I am] ascending to defend Islam, [and I] see everyone else as pigs and cows.”

“There is still a lot of anti-Shiism … and if you’re being taught that and you look at the region, read the news about Syria and Iraq, follow the media machine denouncing Iran and the Houthis, it’s really all a similar direction.”

As with foreign fighters from the West, many of those most drawn to IS in Saudi Arabia have only a superficial understanding of their religion — a fact that makes it easier for recruiters to impose their ideology unquestioned.

That was the case for Khaled Al Ghannami, a former Saudi Al Qaeda supporter who deradicalized a decade ago. “When I was 26, I was so scared of death and what will happen [after life]. I was naive at that age and I accepted religion as a solution,” he recalled from his home in East Riyadh.

But religious ideology is only half of what attracts converts. Politics have also been key to IS recruitment, particularly within the region. IS tells recruits that regional powers have failed to help Sunnis in places such as Iraq and Syria. Hence, they argue, personal jihad is an obligation.

Recruits “have a lack of understanding of political events, and this is exploited by groups,” Maj. Gen. Nasser Al Mutairi, head of Saudi Arabia’s deradicalization program, told GlobalPost. “[IS] says that it is your duty to carry out [jihad] — to take justice into your own hand.”

The numbers of recruits within Saudi Arabia are still relatively small, the Interior Ministry maintains. “This is a country of 20 million, and we’re talking about a few hundred,” Interior Ministry spokesman Maj. Gen. Al Turki told GlobalPost. “We have more young crazy boys than we do terrorists.”

Riyadh is more confident it can fight extremists today, compared to the challenge of battling back Al Qaeda's assault on the Kingdom last decade.

In the years since then, the country has honed its counterterrorism strategy — from security enforcement to social outreach to a vast deradicalization program that has seen roughly 3,000 graduates since opening in 2006.

One of the most vital aspects has been its community outreach program, which utilizes clerical networks to denounce extremist views, said Gen. Al Turki. “People will not take [such advice] from us as a police; they take it from somebody they trust and believe has the right knowledge about religion.”

The education ministry has also worked to cut down inflammatory material in school textbooks since 9/11, when the country came under fire for harsh official teachings denouncing Shiism, for example. Former Al Qaeda member Ghannami, who is also a high school teacher, says he sees a difference. “The schools have had these extremists removed,” he said. “I don’t see fanatics anymore telling students to go [and wage jihad].”

Politically, Saudi Arabia has also tried to reinforce the story about its own legitimacy as an Islamically guided state. This has been particularly evident since the ascension of King Salman bin Abdulaziz Al Saud to the throne in January. The new monarch has painted himself as a champion of Islamic justice and a defender of oppressed Arab Sunnis, including by leading a bombing campaign in Yemen meant to drive back Iranian-supported Shia Houthi rebels.

After the Saudi bombing campaign began in March, “ISIS suffered,” says Dean, using another acronym for IS. “We have a saying that your scream is proportionate to your pain. In the last Baghdadi message, he mentioned Saudi Arabia 80 times. … [Riyadh] stole some of ISIS’s thunder.”

Riyadh’s legitimacy is a key message to ex-recruits who must pass through Saudi Arabia’s deradicalization program, the Mohammed bin Nayef Center for Counseling and Care, after serving their jail terms. At the well-manicured campus a 45-minute drive outside of Riyadh, pupils are given counseling on religion, social life, and politics. The goal is to wipe away extremist ideology, and replace it with belief in the Saudi state. “We need to deal with ideology with ideology,” says Maj. Gen. Al Mutairi. A swimming pool at the Mohammed bin Nayef Center for Counseing and Care, home to Saudi Arabia’s deradicalization program.

New graduates of the three-month program also get help reintegrating into normal life. During their stay at the center, that means learning teamwork by playing sports during their allotted time at the soccer fields or in the Olympic-size pool. They can gain technical skills to help them find a job.

Once they leave, follow-up support from the center helps graduates secure a job, marry, or even pay the rent. The program has provided ex-radicals with 1,260 houses over the years, for example. Officials say the center has an official success rate of 86.9 percent; 13.1 percent of graduates return to some radical activity (and most of the latter group have been re-arrested).

When attacks do happen, Saudi authorities have been swift to condemn them, including those in Shia areas. After a May suicide bombing in Qatif, Saudi Crown Prince and Interior Minister Mohammed bin Nayef visited victims in the hospital. King Salman condemned the “heinous attack” and promised to catch all those involved.

Yet analysts warn that sectarian divisions within Saudi Arabia may be the country’s weakest point — exactly why they are being exploited.

Despite efforts to tone down sectarian language, it’s easy to find examples of clerics and other social media mouthpieces softly supporting attacks on Shias, whom many hardline Sunnis view to be heretics. While such views are rarely voiced by mainstream clerics, the explosion of religious material online is more difficult for authorities to control.

Some sectarian rhetoric still lingers in textbooks too, says Toby Matthiesen, research fellow at Cambridge University and author of "The Other Saudis: Shiism, Dissent and Sectarianism." “There is still a lot of anti-Shiism … and if you’re being taught that and you look at the region, read the news about Syria and Iraq, follow the media machine denouncing Iran and the Houthis, it’s really all a similar direction.

“IS appears to be at the forefront of all those fights, so it’s natural that some people want to join.”

Elizabeth Dickinson is a Deca journalist based in the Arabian Peninsula. Reporting for this story was made possible through a grant from the Pulitzer Center for Crisis Reporting.

This story is the second of two reports from Saudi Arabia on the country's fight against the Islamic State.

Read part one: The Kingdom and the Caliphate: Inside Saudi Arabia’s fight against the Islamic State