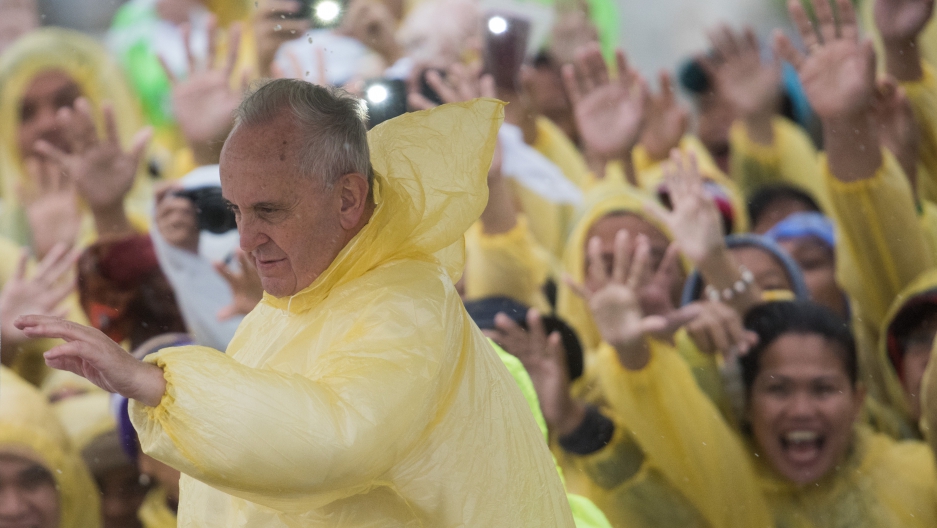 Pope Francis (L) wears a plastic poncho as he waves to well wishers after a mass in Tacloban on January 17, 2015. Pope Francis will spend an emotional day in the Philippines on January 17 with survivors of a catastrophic super typhoon that claimed thousands of lives, highlighting his concern over climate change.
Credit: Johannes Eisele
Share

ROME — An hour before L’espresso magazine leaked an Italian-language PDF of Pope Francis’s long-awaited encyclical on ecology, Massimo Faggioli was unwinding over orange juice in a café near St. Peter’s Square after a day’s research in the Vatican Archives.

The Italian-born Faggioli, a theology professor at St. Thomas University in Minneapolis, reflected on the drumbeat of opinion over a pope weighing in on climate change.

“American Catholic conservatives have already dismissed the letter because of Cardinal [Peter] Turkson’s role in the drafting process,” said Faggioli.

“An African cardinal in charge of drafting a document for a Latin American pope is too much for some of these people.”

A few minutes later, Faggioli checked his iPhone and saw that the conservative Vatican correspondent Sandro Magister had posted the entire encyclical, Laudato Si: On the Care of Our Common Home, on L’espresso — three days before its scheduled release at noon Thursday.

“I believe this was leaked to Magister by one of the enemies to embarrass the pope and deflate the hyped launch,” Robert Mickens, Vatican correspondent for the Jesuit-edited news magazine Global Pulse, said in a tweet.

As news outlets scrambled for translations to post, the Vatican announced that Magister had a draft, not a completed version, and condemned the leak as “heinous.” The Vatican asked the media to respect the publication date, but with copies of the published document already circulating in rarified circles, the impact of Thursday’s planned launch may be diluted.

However, there is nothing diluted about the papal letter itself.

“Climate is a common asset, it belongs to everyone and is there for everyone,” states Pope Francis in the leaked document. “There is a very consistent scientific consensus that indicates that we are witnessing a worrying warming of the climatic system….Humanity is called to take conscience of the need to change life styles, ways of production and consumption to fight this warming, or at least the human causes that produce it or accentuate it.”

Elsewhere in the document, the pope confronts skeptics of climate science with words drawn from the findings of a recent conference at the Vatican’s academy of science: “Many of those who hold more resources and economic and political power seem to concentrate above all on hiding the problems or the symptoms, trying only to reduce some negative aspects of climate change."

The papal encyclical will be a challenge for many bishops who historically rely on support for diocesan charities and schools from wealthy donors aligned with the Republican agenda.

But the many months of conferences, research, drafts and internal critiques of the letter under Cardinal Turkson signal a profound “teaching moment” for the church.

“I think the environment has become a pro-life issue – respecting the life that we find of God in others and his handiwork in the environment,” New Orleans Archbishop Gregory Aymond told GroundTruth in late May.

“We can more easily distance ourselves from ecology. You can see the poor and know they need food,” said Aymond.

“Louisiana is losing land to the Gulf of Mexico,” said the archbishop, in reference to the loss of coastal wetlands, documented at the size of a  football field disappearing ever hour.

“Are we as a city and society taking coastal erosion seriously? And even then, we put a band-aid on it here or there. Thank God we have activists telling us to save our lakes and coasts. Pope Francis is willing to help be a conscience to the world. “

With a clear eye on a pivotal United Nations conference on climate change in Paris this November, Francis uses some of his most direct political language in saying: “The submission of politics to technology and finance is being proved by the failure of the world summit on climate. There are too many particular interests and the economic interest prevails very easily on the common good.”

In pointed political lines, Francis says that it is  “urgent and pressing to develop policies that in the following years can drastically reduce the emission of carbon dioxide and other highly polluting gas, for example, politics that replace fossil fuels and develop renewable energy resources.”

The pope’s view of environmental destruction coming down hardest on the world’s poorest people is part of a concerted strategy, according to a Western diplomat who spoke on background.

This official points out that the Vatican’s Academy of Social Sciences has linked ecological sustainability to the plight of refugees, who are leaving destitution and wars in black Africa and the Middle East for harrowing migrations, often in shaky boats across the Mediterranean to Italy, Greece and Spain. If water becomes scarce in sub-Saharan Africa, said this official, ecology becomes an international security issue as opposed to one of human rights.

In this vein, the papal letter states: “Economic powers keep justifying the present economic system, where speculation and a search for financial revenues prevail and tend to ignore every context and the effects on human dignity and the environment."

Francis singles out an emotional detachment in society toward “the tragedies faced by our brothers and sisters… a sign of the loss of that sense of responsibility for our counterparts on which our civil society is based."

"Many of those who hold more resources and economic and political power seem to concentrate above all on hiding the problems or the symptoms, trying only to reduce some negative aspects of climate change.”

“The reduction of greenhouse gases demands honesty, courage and responsibility, above all from the most powerful and polluting countries...It is time to accept some sort of de-growth in some parts of the world, and provide resources so that other parts of the world can grow in a healthy way.

It is not enough to match, in a middle way, the care for nature with the financial income, or the environmental conservation with progress. In this topic, middle ways represent only a small delay in disaster. Instead it is a matter of redefining progress.”

Beyond the initial impact of Francis’s words – and whether the document has impact in Paris this fall – bishops in various countries are developing plans for disseminating the letter in classes and courses in high schools and colleges.

Marquette University theologian Jame Schaefer, in an interview before the release of the papal letter, predicted that “Catholic colleges and universities will include the study of the encyclical in pertinent courses — theology, ethics, environmental sciences, economics, political science — and offer programs that address concerns from interdisciplinary perspectives oriented toward Earth’s flourishing.''

A week before the release of Laudato Si, Father Enzo Fortunato, the director of communications for the Franciscan order in Assisi, remarked in an interview: “Each pope has is own charisma, and an agenda. For Francis, the focus is three-fold: place, poverty and the environment. For these three values, he is shaping his agenda. The human responsibility to the environment is not about science. He is calling on us not to over-use nature, but to protect it. This is a value that should belong not only to people of faith, but people of science.”