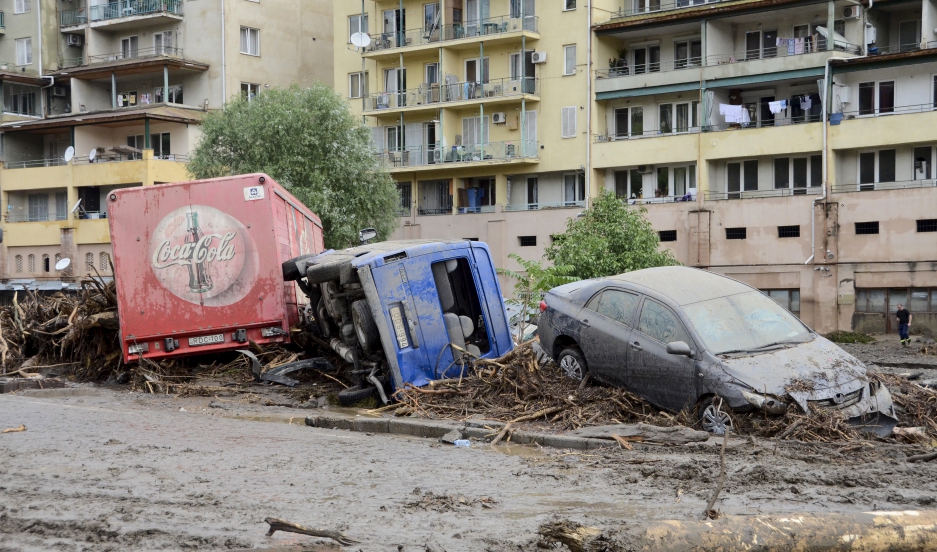 Heavy rainfall turned the Vere river flowing through Tbilisi, Georgia into a torrent that swept away dozens of buildings and cars, June 14, 2015. At least a dozen people died as a result of flooding and mudslides in the Georgian capital.

Roads were completely destroyed. Buildings and cars were swept away. Zoo animals escaped their enclosures and wandered the city's streets. All of this after weekend flash-floods in Georgia paralyzed the nation and killed at least a dozen people.

Journalist Natalia Antelava, who lives in the nation's capital, Tiblisi, says the worst of the flooding happened in a key part of the city.

“It was a mudslide that came in from much higher ground that pushed the river out of its banks and caused very serious damage," she says. "Today is a day of mourning for the victims. There are hundreds of volunteers who are still clearing up. People are still being evacuated from some of the buildings that are near the river where there's some danger of them collapsing. So no, it doesn't feel normal here.”

Another 20 people are still missing. The flooding also caused animals to escape from the city's zoo, leaving a hippopotamus to roam around the city around in shock.

For many, the animal carnage is especially heart-breaking because hundreds of monkeys, big cats and other animals drowned in their cages or were crushed in their enclosures by mudslides. All of the monkeys died because they couldn't swim. Some animals that survived but fled the zoo were later shot by police.

“There were hundreds of animals on the loose.  We’re talking about tigers, wolves, a panther and hyenas. I saw a hyena that was shot dead in the street," Antelava says. "The hippopotamus probably made the most dramatic pictures. It was sedated by a tranquillizer shot, and was led back into the zoo by a bunch of people that were pushing it from behind, an incredible and bizarre sight in the middle of the city!”

Many of the 600 zoo animals that escaped were shot unnecessarily, says Antelava.

“The only explanation that one of the security guards gave me was, ‘Well this is not Discovery Channel.’"

Of course, if an animal acts aggressively, the danger is there, says Antelova. But in the chaos that ensued after the storm, police and security guards, she says, “basically went on a bit of a safari and there are reports of animals that were sedated and tied and could've been transported back to the zoo, instead they were shot as well."

Antelava says many residents who witnessed that harsh treatment find it unsettling.

“Once things calm down, once the people, the survivors of this storm are in safety, and the basics are provided for, I think there will be questions that people who are in charge of the operation will have to answer.”

The death toll in the flooding that traumatised Tiblisi includes three zoo workers, including a woman who worked with big cats. She had recently returned to work after recovering from being mauled by a lion, and losing her arm. Nonetheless, she had returned to her post, saying that she did not blame the lion for what happened and that she would continue dedicating her life to the animals.

When the storm hit and the sudden and massive flooding inundated the cages and animal enclosures, she rushed to try to help the animals. She was killed along with two of her colleagues.