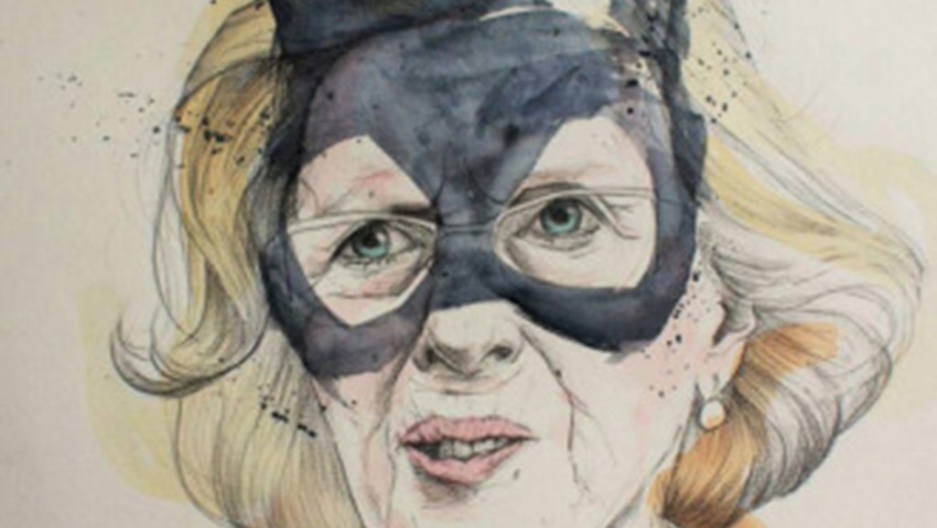 MADRID, Spain — Meet "Catwoman," the 71-year-old retired judge and former communist activist who’s just been sworn in as mayor of this country’s capital.

Manuela Carmena rose from relative obscurity to unexpected power after igniting the imagination of a small army of left-wing illustrators and designers.

Using the hashtag #MadridConManuela (Madrid with Manuela), artists created a series of posters, videos and memes depicting Carmena as everyone from Princess Leia and Julie Andrews to Jesus Christ and Catwoman, the latter a play on the nickname “cats” that people from Madrid often give themselves.

In Spain’s regional and municipal elections on May 24, Carmena claimed an unexpected 20 seats on the city council, one less than the ruling conservative People’s Party (PP), which failed to achieve a majority.

A last-minute deal struck between Carmena’s leftist coalition Ahora Madrid (Madrid Now) and the center-left Socialist Worker’s Party (PSOE) on Friday secured her mayorship — unseating the PP for the first time in 24 years.

“Truthfully, we were unknown candidates, we didn’t have any money for the campaign. I like to say we ran on the currency of hope,” Carmena told The Guardian.

Carmena’s win demonstrates how Spain’s grassroots “indignado” (“the outraged”) protesters are continuing to make the move from city squares to the halls of power via upstart political party Podemos, or We Can, which backed her campaign in Madrid.

Far-left Podemos was born just last year from the ashes of Spain’s 2011 indignados movement, in which demonstrators camped in city squares to protest austerity measures and forced evictions brought about by the country’s ruinous economic crisis, providing a model for the global Occupy movement.

Despite its infancy, Podemos is emerging as kingmaker, upsetting the nation’s traditional two-party system, which has dominated since Spain transitioned back to democracy after the death of dictator General Francisco Franco in 1975.

Seizing on electorate anger over six years of severe spending cuts and a string of high-profile corruption scandals, Podemos and upstart center-right group Cuidadanos (Citizens) called on voters to reject the mainstream and throw the major two parties out of power.

In Barcelona, Podemos-backed anti-eviction activist Ada Colau, who has no prior political experience, was elected the city’s first female mayor after securing support of independents and Socialists.

She ousted conservative Xavier Trias, in a result that mirrored Madrid’s historic changing of the guard.

As the news broke, a 2013 photo of Colau being hauled away by riot police for protesting a housing eviction went viral on Twitter, with the caption: “The mayor of Barcelona. Congratulations.”

She was arrested for helping people getting evicted. Today, she's the mayor of Barcelona. Congratulations @AdaColau pic.twitter.com/LVvtoFOLSg

A teary Colau told supporters: “Ordinary people, who normally don’t have any power, had a historic opportunity and used it. Congratulations.”

That, says Fernando Vallespin, professor of political science at the Autonomous University of Madrid, is one of the upshots of Podemos’s success.

“The best thing about Podemos is that they have allowed people who were outside of the Spanish political system, who didn’t trust the system any more, to enter or return,” he says.

Elsewhere around Spain, the PP lost many of its absolute majorities, suffering its worst result in more than two decades.

Prime Minister Mariano Rajoy, conceding the flogging was less than ideal, was quick to point out that his party still gained the most votes overall with 27 percent of the polls, amid bleak predictions for this year’s upcoming national elections.

Antonio Barroso, senior vice president at Teneo Intelligence, a political risk advisory firm based in London, agreed the defeat could have been worse.

“Certainly it’s bad news in that they have lost considerable power but considering you have a very unpopular prime minister and all the corruption cases that have been tainting politicians, from nationwide scandals regarding party funding to local and regional corruption, well, in a nutshell, it could have been worse,” Barroso says.

But Manuel Villoria, a political science professor at Madrid’s King Juan Carlos University, says the fragmentation of Spain’s political landscape spells trouble for the PP ahead of the national elections, likely to be held in November.

“It is unlikely that the PP will have enough power to control the government so Podemos will probably be the party with enough seats to decide who’s going to run the country,” Villoria says.

Rajoy has already flagged a Cabinet reshuffle and will likely try to shift the focus to Spain’s economic rebound after years of financial crisis in a bid to secure a second term.

The PP is also likely to appeal to the large number of conservative voters who abstained on May 24, leaking away crucial support.

But many analysts believe future instability is all but inevitable as the splintering vote forces parties to negotiate coalitions, historically unusual in Spain and often viewed with distrust by the Spanish public.

Nonetheless, many hope the changes spark a new era of transparency and accountability in Spain.

Says new Barcelona Mayor Colau: “I think what happened in Spain is a democratic revolution. The people have been empowered, and they have spoken.”