Chief Al-Hassan Malik in his community in Accra’s central market district. The chief was chosen to look after all the young people, mostly women and girls, from the East Mamprusi district of Northern Ghana.

Chief Al-Hassan Malik's phone rings constantly as we speak in Accra’s bustling market district. Female porters, known as kayayei, walk by carrying things on their heads, from onions in huge metal pans to lengths of timber.

Women and girls from Ghana’s impoverished north have been coming to big cities to earn money, often to pay school fees. Chief Malik is trying to take care of thousands of them. He was one of the first people to move to Accra from the West Mamprusi district of northern Ghana, more than 25 years ago. So when girls from his village started arriving in Accra, he found himself playing the father figure.

The chief’s honorary title is all the compensation he gets for his job, which, he says, is to make sure the girls have an ally in the big city. "I’ve been tackling this problem for years and years now by myself. There’s no support," he says.

Ghana is an education success story in Africa: it now has one of the best ratios of girls to boys in the classroom. But Chief Malik says most people in northern Ghana have been left out of the country's recent growth, and there are no jobs or opportunities for the girls back home, unless they have a higher education. The costs of getting that education are driving more women and girls here to earn money for school fees.

Chief Malik would rather see these girls stay at home, but no one seems to have figured out how to help them do that. "A lot of different organizations came in, try to resolve it, even the government of the day," he says. "They couldn’t find a solution to it. And the problem was even escalating."

The head of girls education at Ghana’s Ministry of Education, Catherine Mikado, has a different take. She believes the kayayei are motivated by material desires, not education.

Get involved with Camfed Ghana

"Sometimes I feel it’s lust that brings them down south," Mikado says. "It is a fashion, you must come."

"To some extent, girls go to Accra so when they come back they’re seen as travelled, and they can be the 'queen bee' of their communities," suggests Dolores Dickson, the head of Campaign for Female Education's Ghana office, which provides scholarships to girls in the north of the country.

"But the fees are a significant barrier. [After] these girls finish school, they’re looking for opportunities. They can’t find those in their communities, which is why they go to Accra," Dickson says. "The bottom line is, for each and every girl, the reason is financial."

For his part, Chief Malik deals less with the causes than the outcomes of this migration to Accra. If a girl gets attacked or raped, he gets her medical care and tries to get the attention of the police. Recently, a girl who was obviously late in her pregnancy arrived on his doorstep with a toddler in tow. There was no space in the chief’s neighborhood, so she ended up sleeping outside. The second night she was there, she went into labor and ended up giving birth right there in the road. 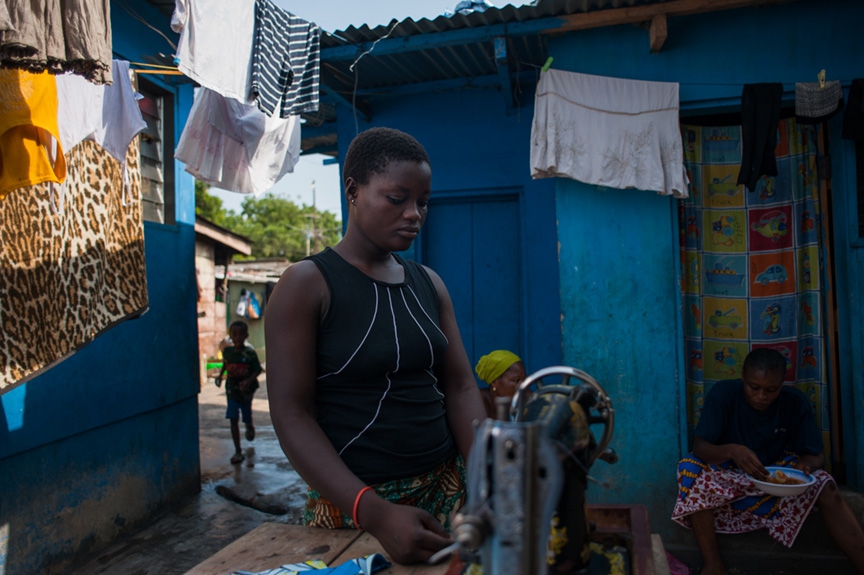 Wasila Salifu, 18, spent three days in jail for stealing from her boss to get enough money to go back to school.  Wasila is one of the million female market porters or kayayei who have migrated from Ghana’s poor rural north to the south.

When I met the chief, he had just bailed 18-year-old Wasila Salifu out of jail. Chief Malik took me to meet her in his neighborhood, a cluster of low-slung concrete shacks along a maze of narrow lanes and open gutters. Salufi was in an immaculate room she shared with nine other girls.

Salifu says her brother had been paying her school fees. But a few months ago, her family sat her down and told her they didn’t have enough money to keep her in high school. Salifu needed about $80, so she came to Accra to earn it. She found a job working for the owner of a hardware store in a market.

After three weeks in Accra, she’d only made a third of what she needed. Then she got sick, missed a day of work, and got fired. The owner of a rival store had a proposition for her: She could steal from her boss and sell the stolen goods to him. Salifu stole from the hardware store — easy enough since most people there didn’t know she’d been fired. She made the money she needed, but says she got robbed. She went back to steal again, and that time, she got caught. "I was saying to myself, 'if I know they’d catch me, I’ll not do that work,'" she says.

Salifu was in jail for three days before Chief Malik found out. Now her former employer says the goods she stole were worth hundreds of dollars. Wasila has to find a way to pay up or face a court date. Later, I heard that other kayayei smuggled Wasila out of Accra, leaving Chief Malik on the hook.

The chief doesn't seem surprised — or angry. It’s happened before, and he’s sure it will happen again as long as desperate girls are streaming into Accra from his home district. He worries that the problems will only get worse until the government starts to deal with the real issues that push girls out of the rural north: poverty, the effects of climate change, and the cost of school.

"If they ... involve some of us, those in the grassroots, they can solve this problem," he says. Otherwise, "it will go out of hand."

For now, Chief Malik does what he can. His tribe gave him this job for as long as he lives. It’s both his honor and his burden to help every woman and girl who shows up on his doorstep.