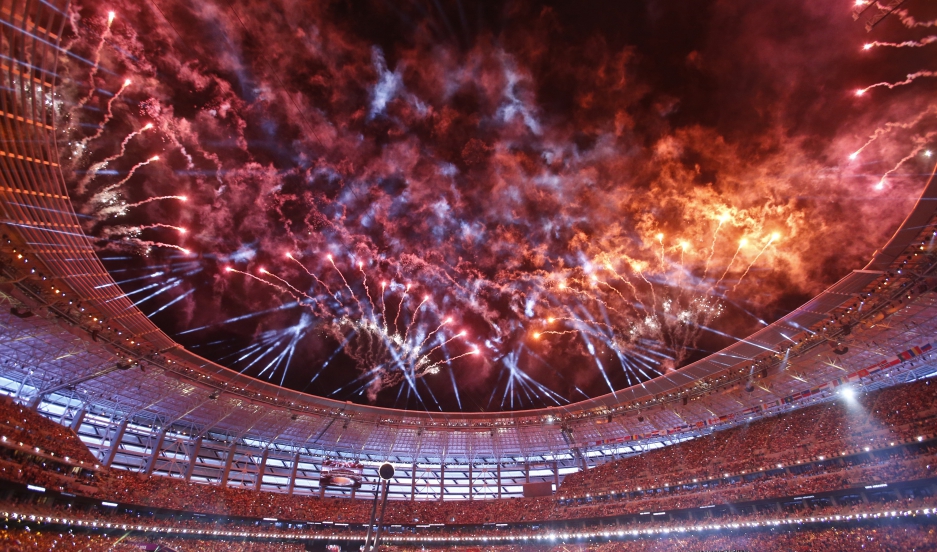 Fireworks explode during the opening ceremony of the 1st European Games in Baku, Azerbaijan, June 12 , 2015.

FIFA and Qatar have both been hit by waves of criticism lately.

FIFA because of the corruption that's allegedly been festering within world soccer's governing body.

And Qatar because of the horrible conditions endured by migrant workers there, who are helping to build stadiums and infrastructure ahead of Qatar hosting the World Cup in 2022. Not to mention Qatar's poor human rights record.

We wondered why Qatar would even want to host a World Cup? The country is no soccer powerhouse. It's also a Muslim theocracy with no appetite for, say, Budweiser — a major World Cup sponsor.

So what's in it for the tiny Gulf emirate?

"They'll end up getting, in terms of total revenue coming into the country, a total of maybe $4 or $5 billion. The outflow is $220-plus billion. That's a terrible financial balance, no matter how you look at it," he says.

So, Zimbalist says, on the face of it, Qatar holding the World Cup is ridiculous. And a ridiculous waste of money.

But he says the small kingdom has a ridiculous amount of oil money. And a vision for its future.

"They would like to create a society that has many dimensions to it," he says, "other than just as an oil exporter. So they've developed a finance sector, so they have tried to develop and entertainment and sports industry. And they view the opportunity to host sports mega events as opportunites to diversify their society — make their society more interesting and attractive to people and businesses around the world."

"They want to be known worldwide to every country on earth as a country. And one-stop shopping is what the World Cup offers," says Noah Feldman, a professor at Harvard Law School who helped write constitutions for Iraq and Tunisia. Feldman knows a thing or two about building a country..

It has about 2.2 million residents. But 90 percent of them are temporary foreigner workers doing service jobs or construction, including building World Cup facilities. And there's some concern about the numbers of workers who have died during the construction boom.

Feldman says Qatar's rulers are pulling out the stops to make the country more than what it is.

"So anything that draws in attention, that shows the country to be a serious country where people might want to live, is beneficial to that and makes them seem like a place where you'd want to live, where there are museums that draw tourists, where there are international events, puts them on the map. And that is part of the overall goal of populating the country," he says.

There's been talk that conservative Qataris might be scared by the monarchy's attempt to draw more foreigners. That they'll see it as the "Dubai-ification" of Qatar: Creating another Vegas in the Gulf. So, the theory goes, the monarchy is cloaking everything as World Cup prep.

But Ibrahim al-Hashmi, who just graduated from Northwestern University's program in Doha, says people of his generation at least are excited about becoming a world-class country.

And they know what's going on.

"It has always been the case that Qataris are outnumbered by foreigners and I don't think there's a problem in that because Qatar is a place for us all and they see opportunity in the country," he says. "That's why they come. And, you know, all these resources will be useful for the country. They are making a new transportation system, the rail system, and the new roads and the hotels. All of these are going to be useful to our economy."

But what happens if the FIFA bidding scandal permanently taints Qatar's World Cup? Or worse, if it's taken away and moved somewhere else?

Feldman says FIFA won't change the venue because of what that change would suggest about the organization. And when these types of mega-events go on, everyone forgets the bad stuff. So Qatar will get what it's paying for.

"This will be the first Arab World Cup and that sends a message of regional leadership. It's not being held in Saudi Arabia. It's certainly not being held in Egypt or in North Africa. And that puts the Qataris at the center of the Arab world. And that also has a regional benefit for them," he says.

Now, how about another another example of an international sporting event that makes you say, "WTF?"

Azerbaijan today threw a huge party to open the European Games in its capital, Baku.

"The what Games," you ask? That's a good question.

Reporter Jacob Resneck says these are the culmination of decades of debate among European Olympic committies on a way to promote their athletes, much like the Pan American Games or the Asian Games.

But others question the need for European games, because there are other qualifying games for European athletes.

Critics have also called it a farce to hold an event that symbolizes fair play and sportsmanship in a country they see as a kleptocracy.

"It's a small country known for its massive petroleum wealth. And also its zero-tolerance policy on dissidents, especially those questioning how the ruling Aliyev family has gotten so fantastically wealthy," Resneck says. "But the answer is pretty simple: They orchestrate large-scale events like this one, and their secret, which is not really a secret, is that the presidential family controls most of the construction companies and private firms that take all these lucrative no-bid contracts. So it's really a pretty neat transfer of wealth for them."

Azerbaijan has a dismal human rights record. Journalists who criticized the games are now in jail. And Amnesty International — that pesky human rights monitoring group — has been barred from entering the country.

The multi-billion dollar event — kind of a mini-Olympics for European countries — is seen as Azerbaijan's coming out party. And a prelude to it hosting the actual Olympics some day.