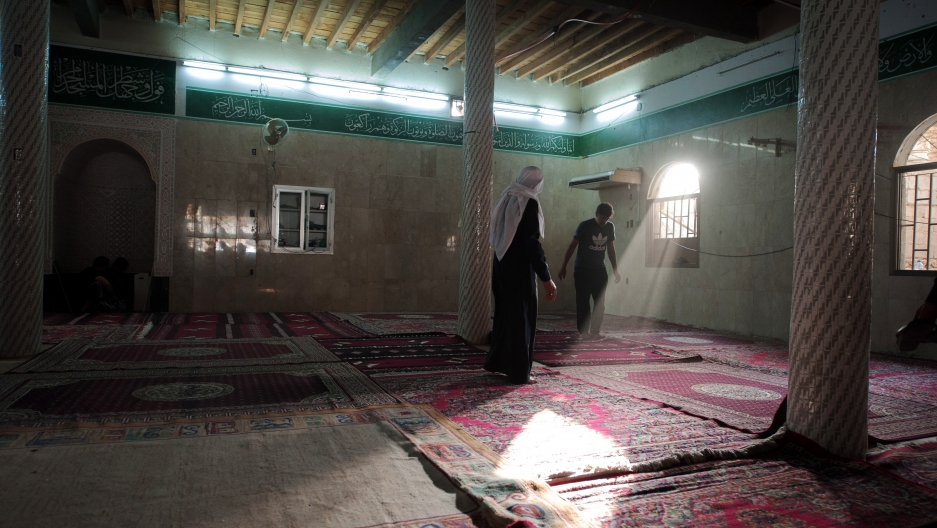 Saudi men lay rugs inside a mosque in Kudeih, on the Saudi Gulf coastal town of Qatif, where Islamic State (IS) suicide bombers attacked as prayers were being held on May 22, 2015.
Credit: Hussein Radwan
Share

RIYADH, Saudi Arabia — Their pictures were plastered across local newspapers and broadcast on state TV. Five million riyal ($1.3 million) was offered as a bounty for tips leading to their arrests. Families were notified of their sons’ and cousins’ wanted status. The 16 suspects were wanted for a series of suicide bombings in Saudi Arabia in May, and the government vowed to catch them all.

Over the last eight months, Saudi Arabia has arrested 1,059 men with alleged ties to terrorist groups, including local cells of the so-called Islamic State (IS). The sweep followed a string of attacks attributed to IS, the most deadly of which have targeted Saudi Arabia’s Shia communities. Last month, suicide attacks in Shia mosques in the provinces of Qatif and Dammam left 21 and four dead, respectively. In November, 11 people were shot dead by masked men in a Shia neighborhood in Al-Ahsa.

For now, authorities say IS and its imitators are more nuisance than significant threat to the country’s security. But with each attack, it becomes more difficult to write off the violence as isolated. Instead, analysts now wonder if the Kingdom is in store for another wave of insecurity, similar to that which hit the country between 2003 and 2007, when the group from which the Islamic State was born, Al Qaeda, unleashed a series of attacks inside Saudi Arabia. Saudi security forces and forensic personnel inspect the site of a suicide bombing that targeted the Shiite Al-Anoud mosque in the coastal city of Dammam on May 29, 2015.

The Interior Ministry says recruitment rates to extremist groups now are soaring to a level not witnessed since that last surge. “Since 2006 and 2007, terrorist crimes were almost gone — we didn’t experience anything,” Interior Ministry Spokesman Gen. Al Turki told GlobalPost in an interview last month. “It’s actually in the last year that we have seen a very escalating effort to recruit people to reactivate terrorism in the region.”

In the decade since the Al Qaeda assault, Saudi Arabia has made sweeping changes to try to avoid a repeat. The Interior Ministry is bigger and more adept at tracking suspects. Schools have toned down some virulent religious curriculum that critics said made pupils easy recruits. But some here warn that Saudi Arabia is only slightly less vulnerable than it was then, thanks to lingering sectarian rhetoric, a bubble of jobless youth, and turbulent regional politics that are easily exploited by extremists.

What does IS want in Saudi Arabia?

It seems at first curious that the state most austere in enforcing Islamic law would be in the crosshairs of a militant group claiming to want the same. But this competition is one reason the battle stands to be so fierce.

Saudi Arabia derives its law from the Quran, and the modern state was forged through a close partnership between the ruling family and the Salafist clerical elite, today known as Wahhabists, named after the school’s founder Muhammad ibn 'Abd al-Wahhab.

“Some pray for ISIS, because for the Sunni peoples of Iraq, this is the only group that is fighting for their future”

IS does not follow the Wahhabi school, but its extreme Salafist ideology bears similarities, particularly in the enforcement of public morality. Yet like Al Qaeda before it, IS argues that Saudi leaders are too close to the West and have fallen into sin.

“The Arabian Peninsula’s rulers have been exposed and disgraced and have lost their supposed ‘legitimacy,’” IS leader Abu Bakr Al Baghdadi declared in his most recent audio message, according to a translation by historian Pieter van Ostaeyen. Saudi leaders, he alleged, had failed to protect the Palestinians and indulged in “intoxication, prostitution, dances, and feasts.”

Now, by claiming to be the seat of a new caliphate, IS has sought to capture from Saudi Arabia — home to the holy cities of Mecca and Medina — the mantle of Sunni Islam. Taking the battle to the Kingdom is an obvious step.

IS draws lessons from Iraq

Tactically, IS appears to be drawing on a strategy that has guided its attacks since the group’s origins as Al Qaeda in Iraq under the US occupation. A Sunni group, the militants then launched a wave of suicide bombs in Shia mosques, shrines, and markets, catapulting the country into a near civil war.

“Their specific aim was to target Shia to start a sectarian war in Iraq,” says Toby Matthiesen, research fellow at Cambridge University and author of "The Other Saudis: Shiism, Dissent and Sectarianism." “The Sunnis wouldn’t have any other option but rely on [Al Qaeda], and the Shia would equally fall back on their sectarian identity.”

To a large extent, that strategy worked in 2006 and 2007. It has worked again over the last year as IS has swept across Sunni areas of Iraq, capitalizing on sectarian grievances. Saudi Shias take part in a mass funeral in the village of Kudeih, in the mainly Shia Saudi eastern Gulf governorate of Qatif, 400 kms east of Riyadh, on May 25, 2015, held for the victims of a mosque bombing carried out by the Islamic State (IS) group four days earlier.

After US troops withdrew from Iraq in 2011, the former government of Nouri Al Maliki won a reputation for sectarian favoritism. Government jobs and services went mostly to Shias; former support to Sunni tribesmen fighting Al Qaeda was cut. When Sunni protesters gathered to voice their grievances in 2013, Baghdad violently extinguished the until-then peaceful demonstrations. IS swept into Mosul last summer with ease, in part because local militias sided with the militants over the Shia-led government.

In Syria, now the primary base of IS, the group also tells a sectarian story to both local and foreign recruits: a majority Sunni population has been bombed and oppressed into desperation by Bashar al-Assad, an Allawite backed by Shia Iran and its allies, the Lebanese Hezbollah movement.

Starting a sectarian war would be harder in Saudi Arabia, where Shias are only about 10 percent of the population. But analysts still say IS could destabilize the Kingdom in unpredictable ways.

“It’s really possible that there would be more attacks on the Shia,” says Matthiesen. Shia communities, meanwhile, have begun organizing small self defense groups to protect their religious sites. “I don’t think we will see a sectarian war, but if it gets worse, we may get more of this self-organized defense.”

Perhaps more alarmingly, such sectarian attacks could ignite a wave of internal radicalization. The conflicts in both Iraq and Syria have had a strong emotional pull throughout the region, where television screens are peppered daily with videos of Assad’s bombing of civilians and Iraqi Shia militias torturing Sunni captives.

“Some pray for ISIS, because for the Sunni peoples of Iraq, this is the only group that is fighting for their future,” said a Saudi academic, who declined to be named because of security sensitivities. “It is the only option.”

Elizabeth Dickinson is a Deca journalist based in the Arabian Peninsula. Reporting for this story was made possible through a grant from the Pulitzer Center for Crisis Reporting.

This story is part one of two reports from Saudi Arabia on the country's fight against the Islamic State.

Read part two: Saudi Arabia is trying to stop its citizens from joining the Islamic State