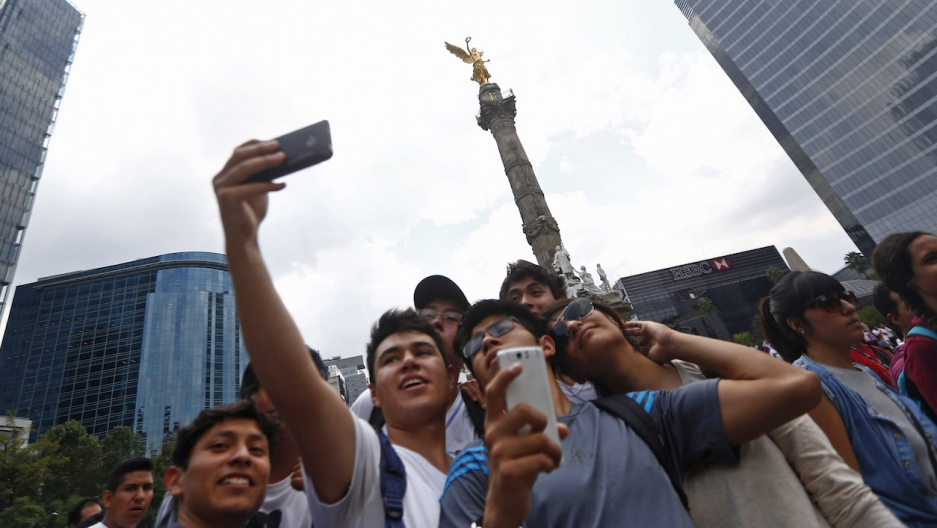 Next up: This coming Saturday, the Mexican capital is shooting for a world record for the most people in one huge selfie.

The weird records obsession started in 2007 when photographer Spencer Tunick took a picture of 18,000 naked people in Mexico City’s main square. That was more than double his previous nude record in Barcelona.

Mexico City broke the record for the number of nudes posing for a photo in Zocalo square in May 2007.

Then in 2009, the Mexican capital made the Guinness World Records with the largest ever dance to Michael Jackson’s “Thriller.” A total of 13,597 participants pranced in horror costumes around the Revolution Monument. Now, selfie mob organizers from the Mexican National Cultural Organization are calling for people to show up 8 a.m. Saturday at the Child Heroes Monument in Mexico City. They’re expecting anywhere from 3,000 to 10,000 posers.

There's some confusion about the actual record they want to beat.

The Mexico City organizers say they're aiming to break an American selfie record, but the Guinness World Records company says that's not entirely accurate. Their PR manager for North America, Kristen Ott, told GlobalPost in an email there’s no current title holder for what Mexico's trying to do. The company has granted previous titles for "most selfies taken simultaneously" — St. Louis currently wears that crown.

But Mexico could win a Guinness World Record for "most people tagged in a selfie," she said. That means the photo must go on Facebook and have the most participants identified ever. And it sounds easy enough: Ott said the minimum requirement is 250 people.

Since hitting the Oxford dictionary in 2013, selfies have become something people can’t seem to get enough of — or, you could say, an annoying habit that spoils tourist sites and drunken nights out.

Either way, contenders keep trying to outdo each other with them.

Many will remember this shot of smug-looking Hollywood stars at the 2014 Oscars.

If only Bradley's arm was longer. Best photo ever. #oscars pic.twitter.com/C9U5NOtGap

Then in November, 1,151 people posed for this gigantic photo in Bangladesh.

Here are more captures from the World’s Largest Selfie Attempt with Lumia 730!

Cynics say selfies are the pinnacle of our egotistical digital culture. But it certainly makes for a headline-grabbing world record.

The organizers say the photo will help tourism and spread the image of a modern digital Mexico.

Local journalist Carlos Puig has written that Mexico likes being in the Guinness books to show it is at least winning at something. Mexico has never won a soccer World Cup and under-performs in the Olympics.

“At least with the Guinness records you can always be a winner: It’s just a matter of inventing a feat that suits your natural assets. Our main asset is volume,” he wrote in The New York Times.

The greater Mexico City sprawl is home to 20 million people, so it’s easy to muster a crowd. Mexico City residents, known as “chilangos,” also have a tradition of taking to the streets in big numbers, whether for open-air concerts, independence day festivities or protests.

Here are some other bizarre records claimed by Mexico City.

The world’s biggest “torta” (a Mexican type of sandwich).

The largest cup of hot chocolate.