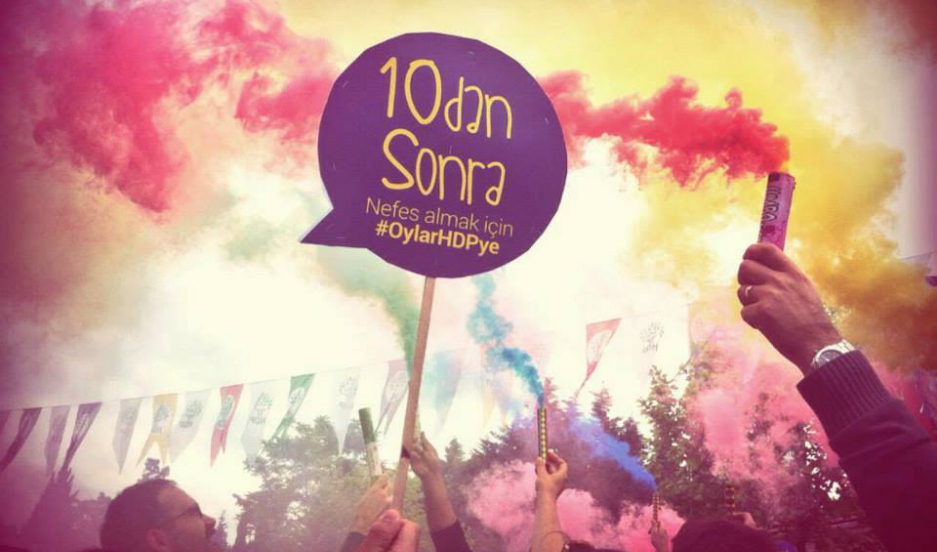 10danSonra at a rally in Istanbul.

A once unlikely alliance of students, leftists liberals, Kurds and LGBT activists jolted Turkish politics last week, uniting behind a single party to propel it to unprecedented electoral success and undermine a planned power grab by the country’s  longtime leader, Recep Tayyip Erdoğan.

The Peoples’ Democratic Party, or HDP, won 13 percent of the vote in Sunday’s election, surpassing the country’s steep requirement that any party must receive at least 10 percent of votes cast to claim any seats in parliament. With 80 seats, the HDP’s success has scuttled Erdoğan’s plan to change the constitution and seize more powers, and thrown the country into a period of political uncertainty as the ruling AKP and the opposition scramble to form a coalition government.

The HDP’s gains were due in part to overwhelming support from Kurdish voters, who are the party’s base, but it was also made possible by young activists in major cities, who saw the election as a referendum on the president. They saw their country at a crossroads — between democracy and authoritarianism.

Many of these activists were part of the Gezi Park protests that swept the country in 2013. As Turkey is likely to see another, potentially more decisive election some time this year, these politically active veterans of the “Gezi movement” may well continue play an important role in the country’s future.

An activist group called 10danSonra, or “Past 10,” was key to rallying opposition to Erdoğan during the campaign. Onur Doğulu, a 38-year-old organizer, was an early member of the group.

“We started two months before the election,” he explained.

Their initial base of operation was in the Kadikoy neighborhood of Istanbul, a cosmopolitan area of the city home to bookstores, dive bars and coffeeshops that was also a hotbed for the Gezi movement.

None of the members of 10danSonra were part of HDP itself, but they were convinced the future of Turkish democracy depended on HDP getting over the 10 percent threshold.

While the HDP was already popular in Kurdish areas and neighborhoods, 10danSonra focused its efforts on increasing support for the party in liberal areas. There, Doğulu said many residents who were opposed to Erdoğan were skeptical of HDP because of its roots in Kurdish nationalism and ties to the PKK. Inspired by Marxist-Leninist ideology, the PKK led an armed struggle against Turkey from 1984 to 2013. The war claimed more than 30,000 lives. Turkey, the US, and NATO consider the group a terrorist organization.

10danSonra activist Selin Görkem takes a selfie in the Kadıköy area of Istanbul.

“We just went to our neighborhoods and said, “OK, maybe you don’t trust HDP, or like them. Maybe you don’t support them. In this election, having them in the parliament is very important for Turkish democracy, otherwise all their seats will go to AKP and they will change the constitution and they will increase the power of Erdoğan.”

Their approach caught on. Within weeks , they were active in other neighborhoods in Istanbul, and soon after, had expanded to several other cities, including Izmir, Ankara, Adana, Mersin, Eskisehir, Samsun, Denizli, Gaziantep and Mersin. The core group of about 25 activists grew to more than 1,000 participants. When the HDP held a rally in March, 10danSonra members turned out. Photos posted to its Facebook page show 20- and 30-somethings holding signs as pink, blue, green, yellow and purple smoke flairs create a rainbow cloud above them.

Ceren Kaysadi, a 24-year-old who works in public relations, was part of the Gezi park movement and supported HDP, despite the objections of her parents who are supporters of the pro-secular Republican People’s Party. She was was drawn to HDP because 45 percent of the candidates the party put forward were woman. She found leaders more willing to detail its positions on issues important to her, like LGBT rights and the environment.

Now that the HDP has 80 seats in the Turkish parliament, she believes it’s a sign that a younger generation is beginning to claim a seat at the table.

“Back in Gezi, when people, no matter what side they were from, there were people with head scarves, with Islamic values, there were atheists, there were people from all cities and from all of our ethnicities and any ideology and from any social class you can think of… and likewise today we can see these different powers trying to negotiate and shake hands in the hope for forming a government solid enough to start making change, to start getting things better,” she says.

While she is hopeful for Turkey’s future, she is convinced that another election is right around the corner, because the opposition parties have so far refused to form a coalition with the AKP. If no government is formed within 45 days of the election, a new election will be called.

She fears political instability and economic insecurity in the months ahead.

“In the long term there is hope, but in the short term I don’t expect very sweet charming days, to be honest.”

Turkey is still divided along partisan, ethnic and religious lines. Even the most experienced observers are uncertain as to what the balance of power will be in the months ahead.

However Doğulu, of 10danSonra, believes the coalition built to support HDP could be an example for other youth movements.

“In the Middle East, now we are facing the darkness of the Islamic State. They are not just killing people, they are killing cultures in this territory because they want just one culture, one party, one religion,” he says. “But with HDP, we said we wanted to represent all the colors. We want to represent all the religions, all nationalities."

“I think this is an alternative way to approach the problem of the Middle East. If you don’t look like each other, you don’t have to kill each other. We have to learn how to live together,” he says.