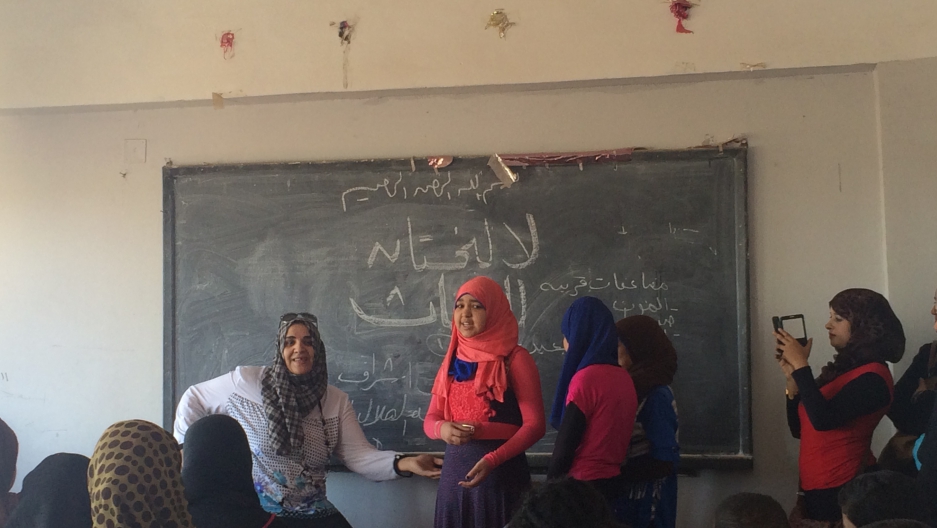 Hala, age 14, acts out a scene in a play in which a young daughter convinces her mother not to allow her younger sister undergo FGM. The play is part of an initiative by the Red Crescent to eradicate the practice in Egypt.
Credit: Laura Dean
Share

ASSIUT, Egypt — When school exams are over and the days lengthen into Egypt's baking summer, the season of female genital mutilation (FGM) begins.

The procedures are carried out this time of year because the girls — usually between 8 and 14 years old — are not in school and have time to recuperate. Recovery can take many days. The occasion used to because for celebration, but since the government outlawed the practice in 2007, it has become a far quieter affair.

In Egypt, the most widely performed type of FGM entails the removal of all or part of the clitoris and sometimes the labia minora. Over 90 percent of Egyptian women between the ages of 15 and 49 have undergone the procedure, according to UNICEF, the vast majority of the operations having been performed by a doctor. In the past, traditional midwives, barbers or sometimes female relatives themselves would perform the procedure, often stopping the bleeding by putting dust or salt on the wound.

But as awareness grows about the dangers of the practice and the lack of religious meaning behind it, some girls who have had it done are seeking to educate their parents and protect younger girls from the same fate.

In a village school in the southern Egyptian province of Assiut, three schoolgirls in a classroom play act out a familiar scene: a mother comes home and tells her younger daughter it’s time to go for her circumcision. But in this version, her older sister intervenes, insisting that nowhere in the Quran or the Hadith — the sayings of the Prophet Muhammad — does it say that the practice is a religious duty. She protects her younger sister from the trauma that she herself went through, saying she’s been taught in school by doctors and religious leaders that it’s wrong.

The play is part of a campaign by the Red Crescent, an international health charity, working in schools in southern Egypt to eradicate FGM. Hala, age 14, who plays the mother in the performance, was cut when she was ten. Since then she has made it her mission to ensure that the practice stops with her.

“I convinced my parents eventually, after a long while. Now they’re extremely supportive. My older sister was circumcised, and I was. My two younger sisters won’t be.”

But as she sees it, she still has a lot of work to do.

“I have to talk to others, especially those whose mothers are not convinced they should stop.”

“The other girls heard my screams and when I came out I found them terrified. After that the women had to drag them in, first my sister, then my cousin.”

The boys in Hala’s class receive the same training, though their understanding of FGM is more abstract.

Hazem, age 13, remembers a girl from his village after she’d had the operation. “They lay her down on the bed. She was very sad. She didn’t know what was happening. She was crying as though she’d been tortured. I didn’t understand what had happened.”

Abdallah, also 13, said if he heard about a girl being taken to be cut, “I would defend her. I would tell her what Sheikh Mohamed [a religious leader who speaks out against the practice] said, I would tell a doctor and speak to her family.”

Many fear that not undergoing the practice limits opportunities for marriage because the families of prospective grooms say they want women who have had the procedure.

“There’s a sense that, ‘all of us are circumcised, if you don’t circumcise your daughter your daughter becomes very odd,’” says Vivian Fouad with the National Population Council, a government body that works on eradication. “The social pressure to have the procedure is very strong in Egypt.”

The first demonstration I've seen in #Egypt in a long time. Children chant against FGM, violence and harassment and call for the right to education, freedom, a clean environment and decent housing in an NGO in#Assiut

Working to convince the daughters and the mothers is a key part of the campaign against FGM.

“The idea that the mothers will be listened to is an important one,” says Hala. People will listen "if they speak out about abandoning [the practice] because they are respected members of the community."

About her own experience Hala says little, except, “It has to stop. It was so embarrassing when people would visit” after the operation. She looks away.

Hajer Abbas, 23, had six much older sisters. When she would sit with them as a little girl, they said, “For goodness sake, don’t get it done. It ruined our marital lives.” They lobbied her mother not to do it to her.

“Before the campaign came to the village there was no discussion about such things, it went without saying that you had it done,” says Iman Abdallah, a teacher in the village who has chosen not to cut her daughters.

Some mothers decided after the trauma of their own experience not to cut their daughters.

“I was small, about 10,” says 44-year-old Nahed Sameer. “I saw three older neighbor women coming to the house, they brought a strange woman with them. My sister, my cousin and I were at home. We went one by one. They said they were going to cut something. We didn’t understand anything. I went in first. They lay me on the bed, each woman holding an arm or a leg. Only then did I start to understand what they were doing. There was no anesthetic. The other girls heard my screams and when I came out I found them terrified. After that the women had to drag them in, first my sister, then my cousin.”

Sameer decided she would never put her own daughter through such an experience. But her mother has threatened to take her daughter and cut her behind Sameer’s back. “She says ‘the water of the Nile makes girls mature faster.’ She looks at her granddaughter like she’s a bad girl.”

A drawing by a middle school child entitled 'A child's fear of FGM.' The little girl hides under the table saying, 'Mum, listen,' while her mother calls to her as the doctor and nurse arrive. #Assiut #Egypt

Even though FGM is illegal, current law makes the practice difficult to police.

“It’s virtually impossible to prosecute anyone for FGM unless the victim dies,” says Jaime Nadal-Roig, the UN Population Fund representative in Egypt. This is in large part because the law criminalizes the parents as well as the person who performs the operation and people are reluctant to report on their relatives and friends.

“You cannot put everyone in the country in jail,” says Nadal-Roig.

“If we could remove FGM from Egypt, one out of every four cases in the world would be eradicated,” says Nadal-Roig.