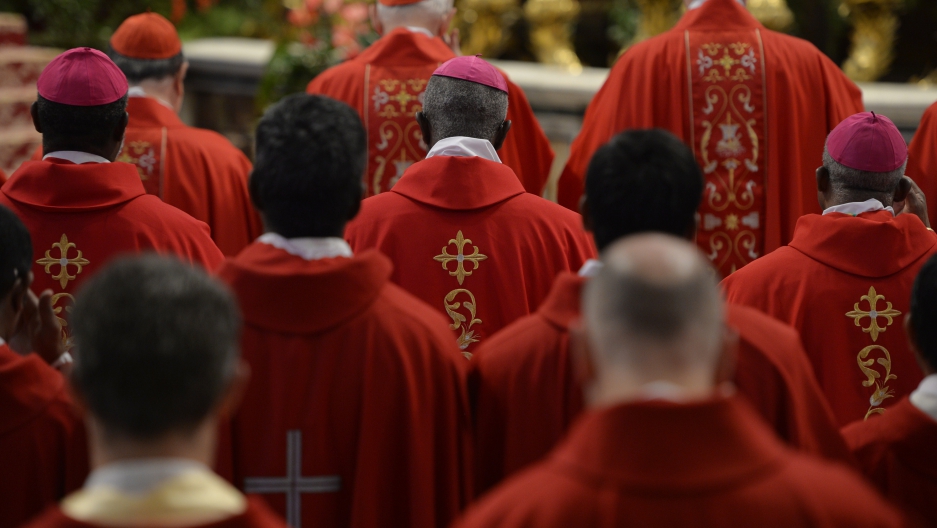 Bishops and cardinals attend a papal mass on the Solemnity of Pentecost at St Peter's basilica on May 24, 2015 in Vatican.
Credit: Andreas Solaro
Share

ROME — The Vatican announced today that Pope Francis’s Council of Cardinals — nine top churchmen charged with reforming the Roman Curia — embraced a plan by Boston Cardinal Sean O’Malley for a tribunal to weigh “allegations of the abuse of office by a bishop connected with the abuse of minors.”

The proposal, accepted by the pope, marks a shift in Vatican handling of the long crisis by establishing a church arena for proceedings against bishops, who with few exceptions have had de facto immunity for any role in concealing sexual predators.

The tribunal will be part of Congregation for the Doctrine of the Faith, formerly the Holy Office of the Inquisition, which has long judged theologians accused of straying from doctrinal unity. In a development pushed by Pope Benedict, who as a cardinal governed the CDF for most of John Paul's long papacy, the office has in recent years defrocked close to 900 priests for abuse of youngsters.

The development was welcomed by lay people appointed by the pope to his advisory board, the Pontifical Commission for the Protection of Minors.

"I am very pleased that Pope Francis has approved our commission's proposal concerning bishop accountability in case of abuse of minors," Dr. Catherine Bonnet, a French psychiatrist with a history of treating abuse survivors, told GroundTruth.

"It is a very important move forward for the protection of minors," she said from France, echoing praise of Peter Saunders, an abuse survivor in London on the commission.

Pope Francis has previously taken sanctions against two Latin American bishops, and he authorized a 2013 law governing child abuse and financial crimes by Vatican officials which led to proceedings against a papal ambassador to the Dominican Republic charged with pedophilia.

The new office will have its own secretary, or internal director, within one of the most powerful congregations in the Vatican.

Irony clouded the announcement that the cardinals had voted unanimously for the new office. One of the nine, Cardinal George Pell, has been in a blistering crossfire with Peter Saunders, the most outspoken member of the Pontifical Commission.

Saunders spoke about Pell on the Australian news program “60 Minutes” on May 31, responding to information from a Royal Commission into Institutional Responses to Child Sexual Abuse.

“He is making a mockery of the papal commission, of the pope himself, but most of all of the victims and the survivors,” Saunders said on the broadcast.

Citing his own meetings in Australia with other survivors, Saunders called on the pope to remove Pell.

Francis has remained aloof from the heated exchange.

Pell is one of the most powerful cardinals in Rome, overseeing Secretariat for the Economy, which coordinates the budget of some two dozen offices in the Vatican city-state, replacing the old balkanized system of fiefdoms – one of Pope Francis’s signature reforms.

One witness to the Royal Commission gave testimony on how he was raped by the cleric, and in seeking compensation from the church, underwent wrenching cross-examination by attorneys with Pell’s approval.

Church lawyers admitted to the commission that the grilling was unnecessary because the case only dealt with the issue of whether the victim’s claims fell within the statute of limitations.

BishopAccountability, the online archive, in a review of documents and testimony, stated in a recent post: “Cardinal Pell conceded to the commission that his instructions had resulted in [the victim] ‘being cross-examined and challenged as to whether the abuse occurred, in circumstances which were harmful and painful to him.’"

Pell is hardly the only bishop to use harsh legal tactics against abuse survivors. Cardinal Timothy Dolan of New York, near the end of his tenure as archbishop of Milwaukee, transferred $57 million into a cemetery fund as lawyers for victims prepared claims. The archdiocese, in a grinding bankruptcy procedure for more than four years, recently lost a federal court decision on the funds as potential assets for the cases.

Perhaps the largest question hovering over the new tribunal at the Vatican is whether its staff will review legal documents from countries where bishops are at the center of litigation or criminal prosecution, and consider forensic proof in foreign courts acceptable evidence in weighing accusations against a bishop.

Speaking of Pell’s approach to abuse victims, Saunders said in the TV interview: “He has a catalog of denigrating people, of acting with callousness, cold-heartedness — [it's] almost sociopathic I would go as far as to say, this lack of care."

Richard Leder, an attorney for Pell, put Saunders on notice in a letter, saying that he had no authority "as a spokesperson for the Committee, adopting the authority of the Pontifical Commission and the Holy See in a wholly misleading manner.’’

Verbal bullets of this kind are common in high-stakes legal scrimmaging in countries rooted in British Common Law.

But for the Vatican — and a reformist pope who enjoys immense global popularity — the spectacle of a pedophilia victim on a special papal commission, and a powerful cardinal, duking it out in the media, was unseemly.

The Vatican’s press office issued a statement of support for Pell.

Leder’s letter said that Pell had twice given testimony to the Royal Commission and a previous parliamentary inquiry.

“He has refuted on oath the various allegations which you chose to repeat on 60 Minutes,” Leder wrote.

Saunders in subsequent interviews has refused to retract his statements. Pell — who voted with the other eight cardinals in a unanimous move for the new Vatican tribunal — is scheduled to give testimony at a future Royal Commission hearing.

Meanwhile, from America, the Minnesota district attorney of St. Paul-Minneapolis, filed a six-count criminal indictment against the archdiocese as an organization, spelling out a chain of misconduct by Archbishop John C. Nienstedt, and his two predecessors going back several years, accusing church officials of failure to protect children.

Each counts carries a $3,000 fine, as a misdemeanor, and is unlikely to result in prison for any church official. But the prosecutor further requested a court-approved plan in which the state would closely monitor church procedures to ensure that no such clerics function

One of the priests who abused youngsters, and is now imprisoned, had a pattern of personality problems going back to his seminary years yet enjoyed a series of promotions.

Terence McKiernan, president of BishopAccountability, called the Vatican’s announcement of the tribunal “a promising step toward bishop accountability, but it will require a courage and an aggressive commitment that has so far been sadly lacking, despite the innovations of Pope Francis."

This story was produced by The GroundTruth Project.