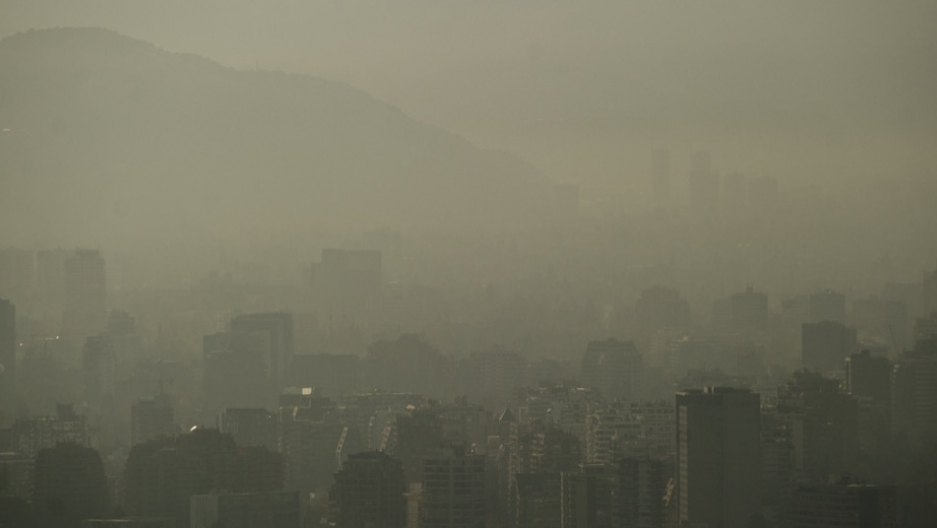 Chile announced a pre-environmental emergency for the capital Santiago and an actual emergency in the soccer Copa America host city, Temuco, because of pollution.
Credit: Martin Bernetti
Share

As South America's soccer heroes jet into Chile for the Copa America, a dark cloud is hanging over two host cities where air pollution alerts are worrying organizers and fans.

With just days to go to the continental championship which kicks off Thursday, an "environmental emergency" was declared in host city Temuco and a "pre-emergency" in the capital Santiago, where the hosts will face Ecuador in the opening match.

Both cities have some of the worst air pollution in Latin America.

Santiago, a city of 6 million people, sits in an enclosed valley with limited wind and little rain to wash away the contamination generated by its vehicles and its bustling industrial sector.

Temuco, a city of 250,000 people some 400 miles to the south, relies heavily on wood-burning stoves for heat during the southern hemisphere winter, often leaving a smoky layer of particles hanging in the air.

Both are alarming Copa organizers, who have scheduled eight matches in Santiago, including the July 4 final, and three in Temuco.

Last week authorities in Santiago ordered a day of extraordinary anti-smog measures for Friday, keeping more than 300,000 vehicles off the roads and nearly 800 factories closed.

Under the so-called "pre-emergency," city officials also suspended physical education classes at schools and recommended citizens refrain from outdoor athletic activities because of concerns over the effects of breathing the contaminated air while exercising.

Temuco declared an emergency two weeks ago because of air pollution — its second this year.

Santiago has declared 10 environmental alerts since the beginning of the year.

But Santiago governor Claudio Orrego vowed the Copa America schedule will not be disrupted.

"We've spoken with the authorities and if there's one thing we can't do it's suspend a match," he told AFP.

Chile introduced tighter restrictions on air pollution levels this year, meaning even more alerts and emergencies will likely be declared.

The aim is to reduce the health impact on adults and especially children. A government study in 2014 found that 4,000 people a year die prematurely of cardiopulmonary diseases linked to air pollution.

Other studies have shown significant increases in respiratory diseases such as chronic bronchitis, pneumonia and asthma linked to air pollution in Santiago.

For soccer fans, the more immediate concern is that stars like Lionel Messi of Argentina and James Rodriguez of Colombia will not be in top form if they play under a blanket of smog, especially coming off a long and tiring club season.

For footballers competing at the highest level, exposure to high levels of air pollution can affect performance, researchers say.

Maya, who trains popular Chilean club Colo-Colo, said practice sessions are an even bigger concern than matches because they generally take place during the day and last longer, exposing players to more pollution.

"There's no doubt that there is a small decrease in physical performance caused by contamination," he said.

"It could have an effect. Not a big one, but in the details."