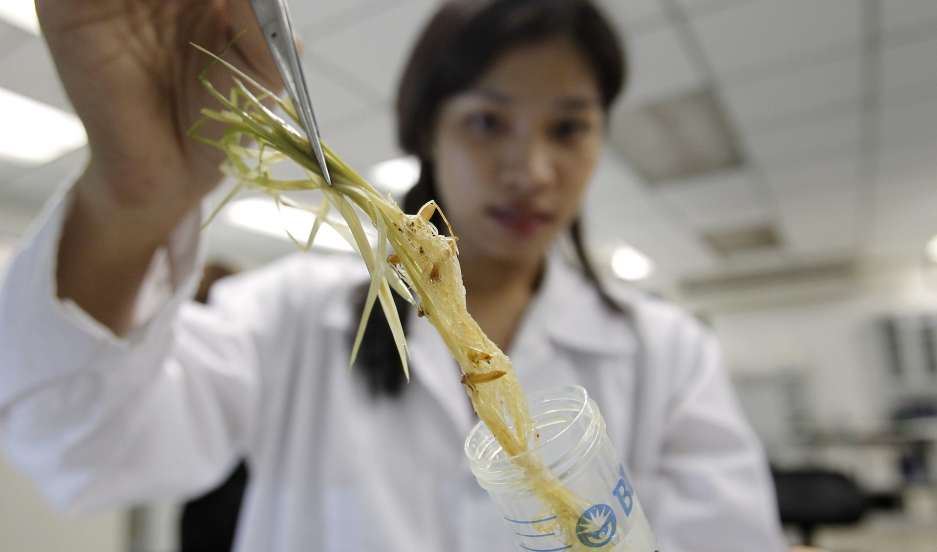 A scientist prepares to scan a root inside a laboratory at the International Rice Research Institute in the Philippines.

He may have a Nobel prize, but Tim Hunt is out of a job after denigrating women scientists as being love-magnet, lovelorn crybabies in the lab.

Hunt resigned from his honorary professor position at the University College London, the university said Thursday, in a statement that read like ''forced to resign.'' The university noted it was "the first university in England to admit women students on equal terms to men, and the university believes that this outcome is compatible with our commitment to gender equality.''

By outcome, the university was referring to the departure of the British biochemist, who was awarded a Nobel Prize in Physiology or Medicine in 2001.

His sexist remark at a conference in Seoul had provoked a swift reaction from scientists — men and women alike — around the globe.

Later Hunt offered an apology, but by then the discussion had taken off, and it was no longer just about the 72-year-old self-described chauvinist.

"Of course, I was disappointed that even today we're still seeing these sorts of entrenched biases toward women," says Dr. Heather Metcalf, director of research and analysis with the Association for Women in Science. "His comments show that even with the best of intentions, that people carry around biases that influence their attitudes and behaviors towards one another."

Metcalf — who directs, coordinates and performs research and analysis surrounding gender and the science, technology, engineering, and mathematics (STEM) workforce — says there is a large body of research that shows the impact of unconscious bias on the sciences. "There are many examples, from hiring to promotion and tenure, to awards allocations, to individual behaviors towards one another, to the culture and climate within our workplaces, to resource allocation and writing of recommendation letters, evaluation and analysis of CVs and other kinds of materials, and teaching evaluations — how students evaluate professors in the classroom. Bias is pretty pervasive."

But Metcalf sees some progress in overcoming bias in the sciences. "For example, through our awards project that we've been engaging with at AWIS, we see that women are receiving more awards. However, the way that bias works is that we have expectations of people about gender, and what kinds of roles they should be satisfying, and then also [expectations] about scientists, and what kinds of things are valued when we think of scientists."

Here's how it plays out. "Women receive disproportionate numbers of teaching, service, sort-of 'helping' awards," observes Metcalf, "because that's more in line with the gender role expectations that we have for women." At the same time, Metcalf notes, women receive lower numbers of scholarly and research awards. "They're not being valued as much for their intelligences, and instead are being recognized for their communal work, or the 'helping' work that they are doing."

Hunt's remarks, and his apology, provided a teaching moment. "While he owns that he may be a chauvinist or engaging in chauvinistic attitudes," says Metcalf, "he doesn't really see why that's problematic. And that's why I'm saying that it's important to focus on the larger system and see how that has a broader impact on the kinds of work that can be done, and the kinds of people that can be doing that work."

His swift departure may provide another lesson.