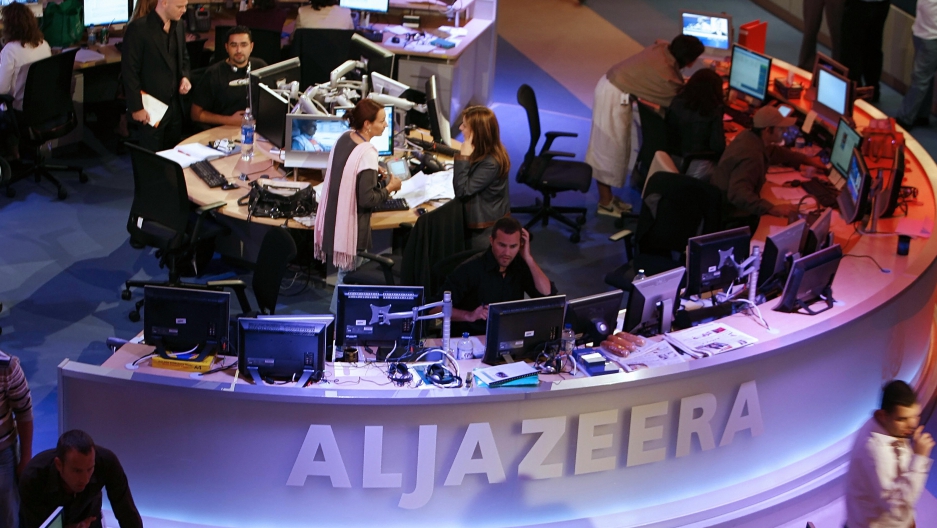 A general view shows the newsroom at the headquarters of the Qatar-based Al-Jazeera satellite channel in Doha.
Credit: Karim Jaafar
Share

DOHA, Qatar — It’s the kind of publicity every terrorist group dreams of.

For two whole minutes, the millions of viewers who tune in to Al Jazeera Arabic watched a highly-produced video of fighters from Jabhat al-Nusra — the Al Qaeda affiliate in Syria — in training. Complete with live fire, close drill marching and obligatory diving through fiery hoops, critics labeled it a propaganda video.

What followed was equally controversial: a 47-minute Al Jazeera interview with Abu Mohammed al-Golani, Al Nusra’s leader and the commander of a fighting force that, separately from Al Qaeda, is designated a terrorist group by the United States. Analyst Aron Lund summed up the feelings of many observers when he described the interview as “softball,” adding: “it was no Frost/Nixon, more like a high school date.”

Controversy surrounding the network’s coverage is nothing new, and there is a common theme.

Al Jazeera TV rocked the Arab world with hard hitting stories on local dictators, on-the-ground coverage of the US invasion of Afghanistan and wall-to-wall reporting on the Arab Spring. But over the past few years some critics say Al Jazeera has compromised its coverage to meet the foreign policy needs of Qatar, its host country and financial backer.

The station began broadcasting in 1996 when a group of former BBC reporters got backing from Qatar's monarch to start a TV network independent of the dominant Western channels. It quickly drew a large Arab audience, who didn't trust the reporting of CNN and the BBC not to reflect their governments' views on key issues such as Israel and Palestine. Today Al Jazeera Arabic has 27 million families viewing its broadcasts, according to Imad Musa, online manager for Al Jazeera English in Doha. The network doesn't release the number of viewers for either Al Jazeera English, founded in 2006, or its website. Al Jazeera America, which began in 2013, draws only about 30,000 nightly viewers.

"Al Jazeera was the only channel focusing on the uprisings in Tunisia and Egypt," Turki Al Balooshi told GlobalPost. He edits Al Balad (The Country), an online daily in Muscat, Oman. "Then it promoted the Muslim Brotherhood in those countries, reflecting the policy of Qatar."

While Al Jazeera does accept advertising, the Qatari government finances almost the entire budget, which is also not public. From the beginning Al Jazeera helped promote Qatar's influence in the region, according to Luciano Zaccara, assistant professor at Qatar University's Gulf Studies Center.

"It put Qatar on the map," Zaccara told GlobalPost. "Al Jazeera was the most important tool [Qatari leaders] had to influence public opinion."

Al Jazeera manager Musa strongly denies that Al Jazeera Arabic alters its news coverage to conform with Qatari government positions. "We do our best to cover the story from the people's point of view, not the state's point of view," he said.

Al Jazeera journalists were given wide latitude to criticize dictatorial regimes as well as US policy, unlike the tightly controlled state media in some Middle East countries. They won wide public acclaim for covering the Arab Spring uprisings that began in Tunisia in late 2010.

Their coverage "was amazing," said Zaccara, noting that Al Jazeera had a camera in Cairo's Tahrir Square shooting 24 hours a day. "I was working with two screens, and I had one screen always looking at Al Jazeera. Al Jazeera had a lot to do with the expansion of this feeling of rebellion in the Arab world."

“We're trying to navigate in one of the most difficult environments known to mankind.”

Musa says his network was uniquely positioned to cover the uprisings because, in the case of Tunisia, other international networks weren't even there.

"Al Jazeera stays in a country well after everybody else has left, and embeds itself with the people rather than official sources," he said.

And Al Jazeera paid the price. To this day Al Jazeera reporters are banned from Egypt, Syria and Bahrain. Two journalists remain jailed in Egypt on trumped-up charges for carrying out their reporting work.

In the view of critics, however, the network began to lose credibility with its coverage of the Syrian uprising against Bashar al-Assad in 2011. Journalist Al Balooshi says in the early days Al Jazeera included both professional video and cellphone footage shot by demonstrators. "Then it began to publish any social media critical of Assad," he said, adding that it promoted the views of the Muslim Brotherhood over those of other rebels.

In 2013 an Al Jazeera Arabic news editor was likely fired, she said, because she wouldn't support pro-Muslim Brotherhood policies at the station. For example, she noted that a video supposedly showing the aftermath of Assad supporters murdering civilians was in fact a rebel attack against the Syrian army. She claimed Muslim Brotherhood supporters had tremendous influence in the newsroom.

Musa denies any bias toward the Muslim Brotherhood. He notes that the Brotherhood "is a part of the political process in the Muslim world. If people elect them in Egypt and Tunisia, we have to cover that."

He says covering Syria became very difficult after the Assad regime kicked out Al Jazeera and other international reporters. Syrian officials refused to appear on air. So Al Jazeera came to rely on social media postings and ordinary citizens who uploaded cellphone video. Syrians protest outside the offices of the Qatari based Al-Jazeera satellite television station in the capital Damascus accusing it if of 'lies' and exaggeration' in its coverage of anti-regime demonstrations across Syria, on April 30, 2011.

Critics raise similar concerns about coverage of the current war in Yemen. Qatar has joined Saudi Arabia and other countries in the Gulf Cooperation Council (GCC) to bomb rebels there. Al Jazeera English has run articles favorable to the bombing but also covered reports from human rights groups concerned about civilian casualties.

Some articles less favorable to the Saudis and Qataris run in English but not Arabic. For example, one hard-hitting Al Jazeera English article about GCC planes using cluster bombs didn't appear in Arabic.

More from GlobalPost: How America and the West got it wrong in Yemen

As to the wider question of Qatar government influence over Al Jazeera, Musa says there's no censorship. He notes there are over 50 nationalities on staff and their diverse experiences help shape coverage. He conceded, however, that "we are in this part of the world and we are funded by Qatar."

Musa adds that Al Jazeera tries not to let its location influence the choice of stories. "We barely cover Qatar," he noted.

And that's a problem, according to labor and human rights groups, who say Al Jazeera Arabic doesn't provide adequate coverage of worker exploitation. Qatar and other Gulf countries use the kafala labor system in which employers contract to bring workers from abroad and sometimes subject them to abuse.

Saud al Salmi, head of the oil workers union in Oman, says Al Jazeera "used to be one of the best. Now, when it comes to local matters, there are boundaries."

Al Jazeera“used to be one of the best. Now, when it comes to local matters, there are boundaries.”

Al Jazeera English has run numerous stories about the kafala abuses, particularly since Qatar came under scrutiny for conditions faced by workers building facilities for the 2022 World Cup. But it gives greater credibility to government sources than generally done by other international media.

More from GlobalPost: 6 times human rights were violated in the name of soccer

Musa criticizes Western media for not understanding local customs, including the kafala system. "Western countries want to impose change based on certain standards of what's right and what's not in the West. In the East these conventions have developed over decades in order to protect their own citizenry."

What some see as "conventions," says journalist Balooshi, are a cover for paying laborers low wages to work long days in searing heat and with little ability to change jobs.

Three years ago Al Jazeera tried to expand its viewership by buying a failing US cable network and renaming it Al Jazeera America. In some ways the news programming is a throwback to an earlier era of US TV with a serious approach to news, longer stories, and thought-provoking analysis. Missing are the screaming hosts and tabloid celebrity features now occupying space on cable TV.

"To cover the US is a huge challenge," admitted Musa. For years US networks fed viewers what they wanted — tabloid news, or what Musa calls "ice cream."

"Here comes Al Jazeera and we feed them broccoli. And we don't even put salt and pepper on the broccoli."

Musa expresses optimism that Al Jazeera America will resolve its internal problems and increase its audience. And he remains confident that the Arabic and English branches of Al Jazeera will continue to cover the complicated Middle East.

"We're trying to navigate in one of the most difficult environments known to mankind," said Musa. "So nothing is easy for us."

GlobalPost correspondent Reese Erlich is author of "Inside Syria: the Backstory of Their Civil War and What the World Can Expect," now available in English and Arabic.