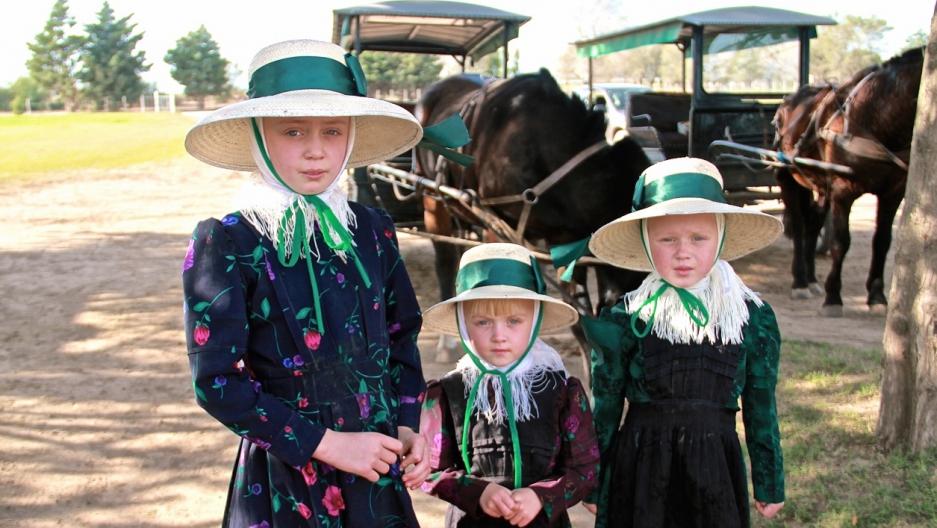 LA PAMPA, Argentina — It's Argentina, but you won't hear much Spanish or tango music, or see any "futbol" in this village.

It's nothing quite like the rest of this modern South American society. The Orthodox Mennonites of "New Hope" colony prefer it that way.

More than 1,000 Mennonites immigrated here from Mexico and Bolivia in 1985. They said they needed to move to avoid too many consanguineous marriages — marrying blood relatives. They now number about 1,500, living on a tract of about 40 square miles on the outskirts of Guatrache, a town in La Pampa province.

It's a struggle to stick to tradition: no electricity, no cars, no dancing, not even sports, on top of a list of other strict Anabaptist Christian customs.

They rarely get married to outsiders. All men wear the same dungarees and cap. Women wear long old-fashioned dresses and cover their heads.

The colony mostly speaks to each other in Plautdietsch, also known as Low German, but manages other languages when outsiders come around.

“We are aware that there’s a world out [there] where people use mobile phones,” Caterina Hardem, a housewife who cooks for visitors, says in English. “We respect everyone’s culture but we don’t want any of this technology,” she explains. She's currently wrestling with her teenage son’s desire to get a cellphone.

Holding onto traditions is a challenge facing Mennonites around the world. Many elsewhere have chosen to adapt to aspects of the modern societies around them.

Originating in Germany, religious intolerance forced the Mennonites out of the old country before the Protestant Reformation, and they emigrated all over the world, primarily to Africa, Latin America and the United States. The US Mennonite Church claims more than 95,000 members. There are an estimated 1 million Mennonites worldwide.

You may be familiar with some of the American communities, but have you ever seen the Mennonites’ South American digs? Swipe through the photo slideshow above for a glimpse.