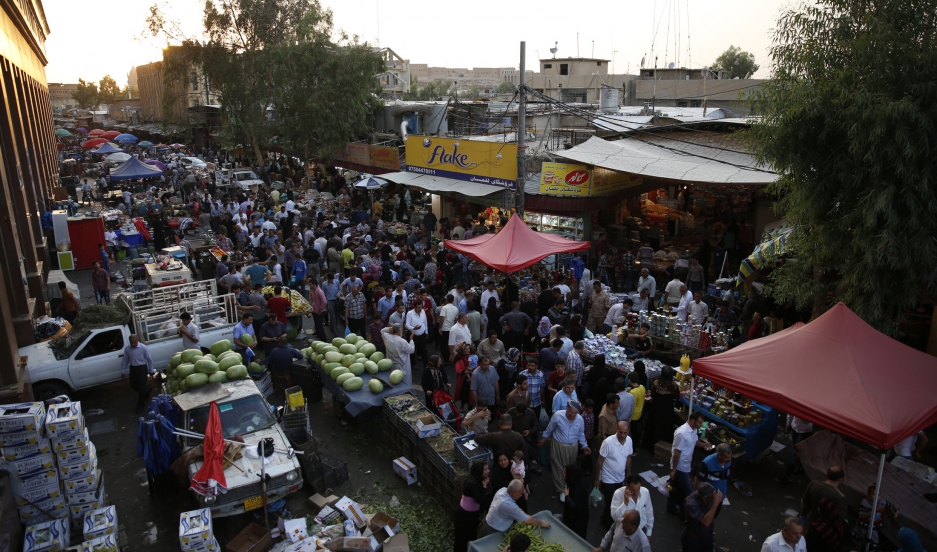 Residents of Erbil buy groceries in a local market.

The headlines coming out of ISIS-controlled Mosul are dire. But about 60 miles down the road, life bustles in a parallel universe called Erbil, the capital of Iraq's Kurdistan.

That's where 29-year-old Sahar Gabriel, a human resources manager for an electronics firm, says she leads "a pretty normal life," that includes swimming and bowling. "We have a great Chinese restaurant that just opened up," she says. "We have five major shopping malls and two more opening."

That's a far cry from life in Mosul, where ISIS took control a year ago. The Islamic militants there banned all music and film. But two hours away by road, Gabriel is enjoying Western movies in two local cinemas.

"I just went to see 'Tomorrowland' with George Clooney," she says.

Gabriel says residents on her street now include Iraqis displaced from Mosul,as well as Ramadi. "In the beginning they were everywhere, and it was a crisis situation," she says. "Now they're starting to settle into the city ... Most of them are finding jobs, most of them are starting to rent out houses and buy furniture and they're settling in.  The people that I meet are coming to terms with the idea that this is going to be their home from now on."

Gabriel was born in Baghdad, and spent two years in Dearborn, Michigan, beginning in 2008. She says she's at peace with her decision to move back to Iraq and reside with her family in Erbil.

"We can have a modicum of social life here and meet new people — interesting people — and it's still a part of our homeland," she says. "It's a separate region, it has a different government and even the language is not the same. But it's still home."

Irbil isn't the only city that challenge Western perceptions of Iraq. A FRONTLINE video of street parties and youth joyously living life in Baghdad has proven to be one of its most popular videos posted this year.