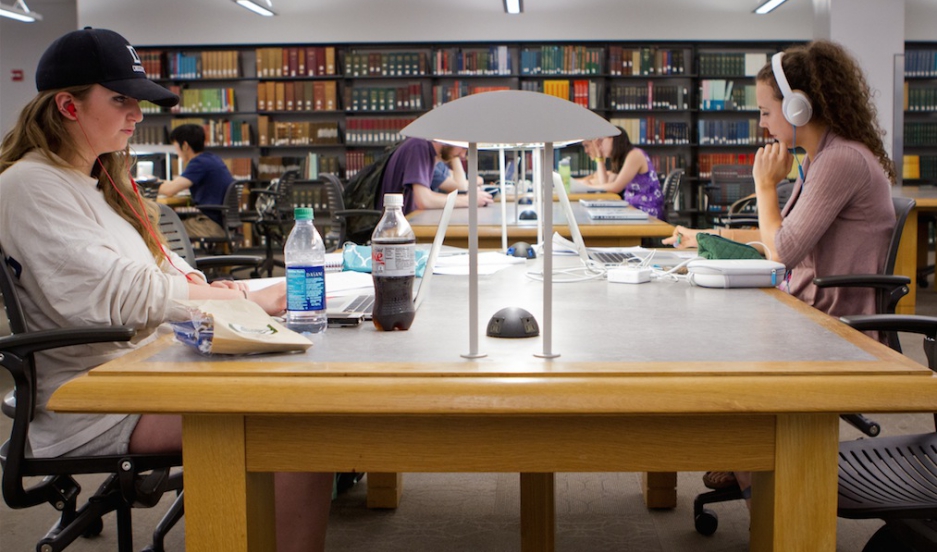 What students in Dartmouth's Baker Library might not know is their smart phones have the capabilities to predict their GPA.

What if your smartphone could predict your performance at school or work? Researchers at Dartmouth are perfecting an app that can tell students their GPAs, based on how and where they spend their time.

A few years ago, computer science professor Andrew Campbell was shocked when his own research found that there's actually no correlation between the time students spend in the classroom and their grades. So, Campbell set out to discover what did have an impact on students' grades. He developed an app that collected the behavioral data of 30 of his students.

Walking across Darmouth's ivy-covered campus in Hanover, New Hampshire, Campbell pulled out his Android to demonstrate how it uses microphones and other GPS sensors to gather information. The Android can tell if its user is walking or running, having an in-depth or shallow conversation, and exactly where on campus he or she is located.

"We can predict GPA within 17 hundredths of a point. Even though it’s a small cohort of students, the result is statistically significant," explains Cambell.

And, no surprise here, students who spend more time studying without distraction perform better at school. "We clearly show that if you party too much and study too less those have a significant impact on your GPA," says Campbell.

The idea of having an app that can predict your GPA based on where and how you spend your time is creating a buzz on this highly competitive, elite college campus. “I think it would be interesting to see how my performance in school is affected by other activities that I might not have associated with bad or good performance," says Benn Farrar, a freshman from Reno, Nevada.

Farrar is in the middle of finals, and he admits he’s a little uneasy about an app that tracks what he's doing all the time. But even so, Farrar says, it might be worth the tradeoff. “If it really can predict your GPA to within however close of a percentage, I think that’s pretty crazy," Farrar says. "It’s not an invasion of my privacy if I’m giving them that information.”

And while the technology may seem Orwellian to some, Professor Andrew Campbell isn't concerned.

"I think we’ve crossed the Rubicon in terms of invasive technologies in our lives," Campbell says. "Whether you like it or not, devices are intelligent and they can say things about you that may be hidden.”

Related: How a Text Message Might Boost College Enrollment

Moving forward, Campbell would like to see his app help students beyond the gates of Dartmouth. Next semester he's planning to test it on a larger group of students at the University of Texas in Austin.

“Whether you’re at a high school, or a community college, or any college across America, I think providing information to people is useful," says Campbell.

This software comes at a time when higher ed is using piles of data to improve student success and graduation rates. And Campbell points out that another potential use might be for companies to observe whether employees are being productive.