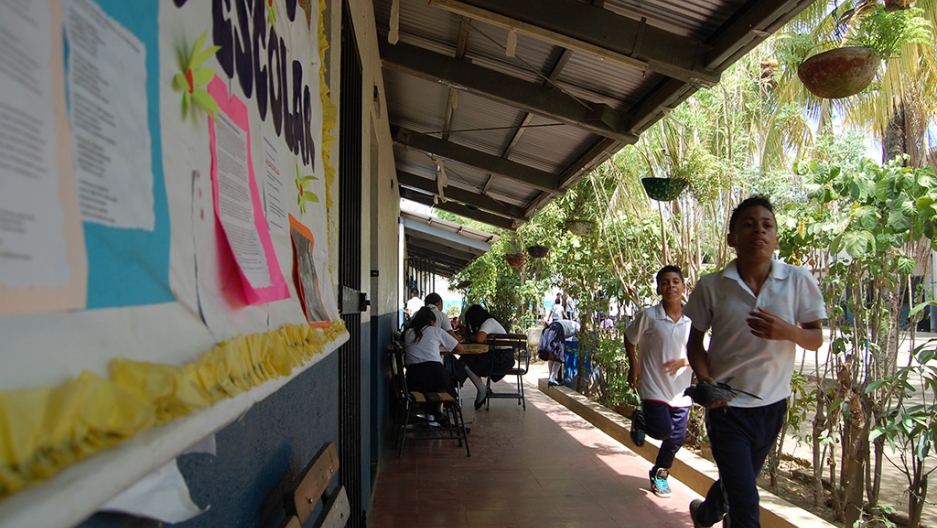 Students run outside a school in Leon, Nicaragua, which has an alarming rate of teen suicide.
Credit: Rebecca Blandon
Share

LEON, Nicaragua — A school psychologist sits across from 18-year-old Camila and asks her a seemingly routine question: “What are your goals for this year?”

“I only have one goal,” Camila says, chewing on her fingernails. “To commit suicide before I turn 20.”

The psychologist, Fabiola Saenz, freezes in her chair. Ever since a 13-year-old student at the same school hanged herself last November, she has been terrified that it would happen again.

“A psychologist had to seek psychological help,” she tells GlobalPost. “I couldn’t sleep at night, scared that I would wake up to news that I had lost another one of my students.”

In the wake of that trauma, authorities at the school are especially alert for symptoms of deep depression or suicidal tendencies. “Teachers are more proactive about referring students to me, and more on the lookout,” Saenz says. “We have to pay attention to the signs that our students give us.”

The schoolgirl’s suicide was part of a larger pattern. Nicaragua has the highest teen suicide rate in Latin America, according to the Pan American Health Organization. The suicide rate for Nicaraguans between 15 and 24 is 23.7 per 100,000, nearly double the Latin American average.

In her therapy session at school, Camila (not her real name) said she tried several times to take her own life, once by trying to asphyxiate herself using a plastic bag and twice by hanging. Her most recent attempt had been just two days earlier.

Hanging is a common method. Another is ingesting a pesticide known as the 'love pill.'

Hanging is a common suicide method in Nicaragua. Another is the ingestion of pesticides, specifically a pill that is used as an agricultural disinfectant and rat poison. This pill has become known as “pastilla del amor,” or “love pill,” because heartbroken teens supposedly take it as a last resort. Despite the government’s attempts to regulate its sale, it is readily available for the equivalent of about 30 US cents.

Absent or alcoholic parents are a common part of family life in Nicaragua. Camila said her home life, shadowed by her father’s departure when she was 8, contributed to her depression.

“My mom would hit me and say it was my fault he left ... I started hurting myself.”

Later she adds, “If I die, I’ll just be one less plate to feed for my family. I would be doing them all a favor.”

In the United States, patients who attempt suicide are routinely hospitalized for up to 72 hours after. In Nicaragua, however, doctors may not hospitalize patients without their consent. Camila refused to be hospitalized after her last attempt.

“It’s really important in this process for the patient to be taken to a place where they can stabilize emotionally, but we can’t force anyone,” says Andres Herrera, a psychiatrist at Leon’s main hospital. He calls the exceedingly high rates of depression and suicide in Nicaragua “an epidemic.”

A Canadian medical student working with Dr. Herrera, Sarah Levitt, says these high rates may partly be a product of the turbulence of Nicaragua’s modern history, including earthquakes, hurricanes and civil conflict that raged almost continually from the late 1970s to the late 1980s.

“This problem is actually very connected to the systemic consequences of the war,” she says, “combined with the very serious natural disasters that this country has faced.”

“In my generation, there was ambition and heroism,” she says. “Now, there is only lack of opportunity, loss of hope, and a sensation of impotence. They see no other way.”

As Camila’s therapy session ends, Saenz asks her how she feels.

“I feel weird,” she mumbles. “It’s the first time all of these problems are outside of my own head. It’s weird, but I think it’s good.”