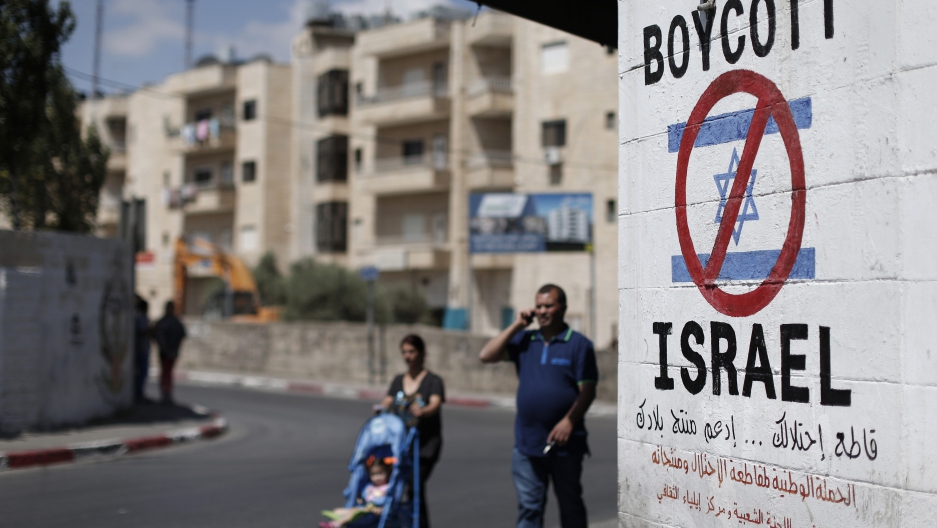 Palestinians walk past a sign painted on a wall in the West Bank biblical town of Bethlehem on June 5, 2015, calling to boycott Israeli products coming from Jewish settlements.
Credit: Thomas Coex
Share

TEL AVIV — Judging from the headlines here in recent days, the greatest strategic threat facing Israel has been a group of university students in Britain.

Prime Minister Benjamin Netanyahu, who not long ago was obsessively focused on Iran’s nuclear program, has begun to issue dire warnings about the international, pro-Palestinian Boycott, Divestment and Sanctions (BDS) movement. “We are in the midst of a great struggle being waged against the State of Israel, an international campaign to blacken its name,” he said before a cabinet meeting on May 31.

After the UK’s national students union approved a symbolic measure to boycott Israel, other politicians upped the rhetoric. Yair Lapid, the former finance minister, called BDS “a puppet in a theater operated by Hamas and Islamic Jihad.” Naftali Bennett, the hawkish education minister, vowed to hit back. “We will attack our attackers. We will boycott our boycotters.”

The media have jumped on the bandwagon, too, with BDS the talk of television news programs for the past few weeks. The country’s largest paid daily launched a campaign against it: “Yediot Aharonot is enlisting in the fight,” it wrote. Ben-Dror Yemini, their prominent right-wing columnist, called BDS “a threat to Israel’s very existence.”

Yet according to the Knesset, the Israeli parliament, this existential threat has had zero discernible economic impact. “The impact of BDS is more psychological than real so far,” an analyst from Moody’s said in February.

So why the panic?

The BDS movement was founded in 2005 by a group of Palestinian activists. Today, it draws support from around the world, including from many in the Jewish community. It calls for imposing various economic penalties on Israel “until Palestinian rights are recognized in full compliance with international law.” The group cites three specific demands: ending the 49-year-old military occupation; granting full equality to Palestinian citizens of Israel, who make up 20 percent of the population; and “respecting, protecting and promoting” the right of return of Palestinian refugees.

It has undeniably had successes. Some are symbolic, like convincing dozens of singers and performers to cancel events in Israel. Lauryn Hill, for example, scrapped a concert in Tel Aviv last month, telling fans she was backing out after she failed to organize a parallel performance in Ramallah. Others ignore the pressure. Bon Jovi is planning an October gig. The Backstreet Boys played here in the spring (admittedly, a dubious victory for the anti-BDS crowd).

Campaigners have also notched a few divestment victories, among them a $200 billion pension fund in the Netherlands that stopped investing in Israeli banks, and Norway’s sovereign wealth fund, the largest in the world, which banned investment in several Israeli companies. Several churches have made similar moves.

“The totality of this problem, this disease, it’s important to understand that we are talking about a new intifada.”

Officials in Jerusalem are particularly worried about the European Union, their largest trading partner and most critical ally. The finance ministry estimates that a 20 percent reduction in trade would shave 1 percent off Israel’s GDP, and cost nearly 10,000 jobs.

But the opposite has happened. Since the BDS movement was founded, exports to the European Union have doubled to $15.6 billion per year, and foreign investment in Israel has surged as well.

Harder to gauge is the impact on foreign companies that do business with Israel. In 2011, for example, BDS took credit for the French conglomerate Alstom losing its bid for a $9.4 billion contract for a railway in Saudi Arabia. The firm was involved in building the Jerusalem light rail, which runs through neighborhoods in occupied East Jerusalem, and campaigners have long considered it a prime target.

Alstom continues to have lucrative business in the kingdom, though. Two years after it lost the rail bid, it was part of a consortium that won a $6.7 billion project to build a metro in the capital, Riyadh.

Last week Stephane Richard, the CEO of the French telecoms giant Orange, told an audience in Cairo that he would quit Israel “tomorrow,” were it not for the risk of penalties and lawsuits. His firm has faced mounting pressure to pull out, because the local company that holds the Orange brand operates stores and communications towers in settlements in the occupied West Bank.

On Thursday the company went further, announcing in a brief statement that it “does not wish to maintain the presence of the brand” in Israel.

Another victory — so it seemed. But the announcement provoked a furor, and within days Richard called Israel’s deputy prime minister to apologize, saying that he loved the country and “condemns boycotts of any kind.” He has since agreed to visit Israel and make amends with Netanyahu in person. A demonstrator shows a placard inside Woolworths at Killarney mall in Johannesburg on October 25, 2014.

With such a marginal economic impact, Netanyahu does not really fear BDS. He fears early elections: The prime minister is desperate to enlarge his coalition beyond its bare majority of 61 members of the 120-seat Knesset. So he has used BDS, much like the Iranian nuclear issue before it, to call for a broad-based unity government.

But he was serious about the Iranian issue, investing billions of shekels to prepare the army for a possible strike. The anti-BDS campaign has perhaps a dozen people working on it.

Other politicians have used it as a cudgel against their foes. The Knesset held a heated debate on the subject last week. It was conducted, of course, in Hebrew — aimed at making headlines on Israel’s evening news, not convincing a global audience.

“The totality of this problem, this disease, it’s important to understand that we are talking about a new intifada,” said Isaac Herzog, the opposition leader.

Herzog’s colleagues on the left have hyped the threat, hoping that the fear of boycotts will convince voters to push for a two-state solution. “It’s the last stand of the Israeli left … to take it from Lenin, that it has to get worse before it gets better,” said Ofer Shelah, a Knesset member from the center-left Yesh Atid party.

Shelah is critical of the strategy, acknowledging that the boycotts “tend to galvanize people to circle the wagons.” The right has long described BDS campaigners as Jew-haters, an unfair characterization of the vast majority of the movement’s members — but an effective way to rile up supporters. “This is anti-Semitism in a new guise,” Justice Minister Ayelet Shaked yelled during the Knesset debate.

The steady drip of boycotts, like the fierce criticism of last summer’s Gaza war, has helped to convince many Israelis that the world is against them, and that Europe in particular is a lost cause. This isolationist attitude is an electoral boon for the right.

Yet it may also count as a success for BDS campaigners. Later this summer, the European Union is expected to start labeling Israeli settlement products, a long-delayed move that would have been unthinkable with a center-left government rhetorically committed to the “peace process.” For a movement dedicated to upping the international pressure on Israel, nudging the country to the right is a victory.