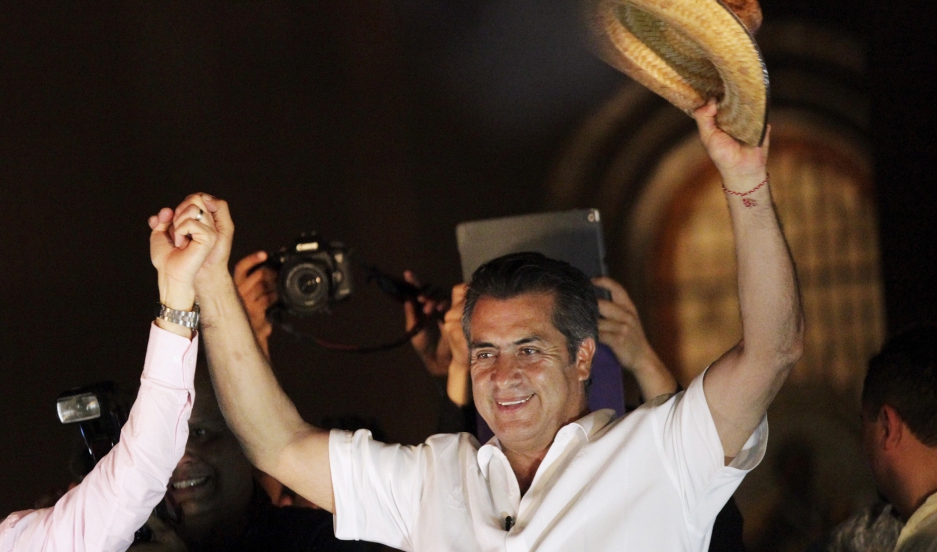 History was made during Mexico's elections on Sunday, when a swashbuckling, tough-talking candidate whose nickname is "El Bronco" became the first independent candidate to win an election for governor of a Mexican state.

Jaime Rodríguez won as the governor of Nuevo Leon, a state close to the Texas border and a critical location in Mexico for business.

"This is a man who loves to strut around in cowboy boots, a big Stetson hat and he looks like the sheriff," says Mexico City reporter Franc Contreras.  "He has that can-do cowboy attitude."

This mid-term election was the first in Mexico to allow candidates to run without any party affiliation. In some ways, Rodriguez' victory was an expression dissatisfaction by voters with all of Mexico's political parties.

"There's a sense that a huge amount of spending takes place. ... And Mexicans don't feel like they're getting the bang for their peso," Contreras says.

The current party in power, the Institutional Revolutionary Party under President Enrique Pena Nieto, has been tainted by allegations of corruption, failure to control drug gang violence and an inability to lift Mexico out of its economic slump.

Rodriguez used to belong to the PRI, but left when the law changed this year, allowing him to run as an independent.

His campaign slogan was tied to his very personal experiences. “One dead son ... One kidnapped two-year-old daughter ... And 2800 bullet holes in my truck." Rodriguez lost a son during car accident. His daughter was reportedly kidnapped by one of Mexico's most violent drug gangs, and he was the target of two assassination attempts.

"What he's saying to people is that he can bring the violence under control and when he was mayor of a town just outside of Monterey, he was able to bring drug trafficking into check by strengthening the police force, paying them better, and earning more respect for law enforcement.

Projections suggest the PRI will win a slim plurality of votes at the national level, winning about 30 percent of the vote, but see its number of seats in Congress drop.

Contreras says the PRI will rely on support from the Green Party to govern. Although generally known as an environmentally-conscious party in the US, Mexico’s Green Party is nothing like that, says Contreras.

“When you ask most Mexicans on the street what they think of the Green party, they'll say, 'Yeah, green like dollar bills green.'”