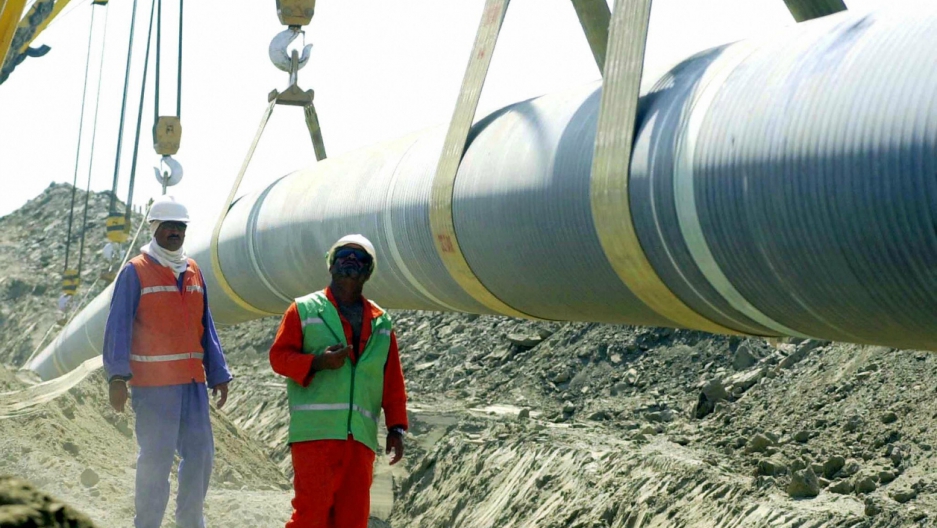 Workers lay a section of the Baku-Tbilisi-Ceyhan oil pipeline near Baku in August of 2003. The pipeline will pass through Georgia to Turkey's Mediterranean coast.
Credit: RIZA OZEL
Share

Editor's note: The writer, Elin Suleymanov, is the Ambassador of Azerbaijan to the United States.

The ancient Silk Road brought valuable goods, ideas and information from Asia to Europe, including inventions such as paper and gunpowder. Countries that missed out on these advances lost out on the progress and prosperity of their times.

Now, world and regional leaders are making plans to build a new Silk Road, consisting not only of roadways but also pipelines, cable lines, airports and ports.

The nations along this corridor of commerce and cultural exchange will see economic and political benefits. Which countries will win the competition to map out the new Silk Road? The United States has presented a vision that reflects an "enduring commitment to the region, a recognition of the vital importance of economic and energy connectivity, and a representation of our belief that shared prosperity can lead to stability and security," said Assistant Secretary of State Nisha Biswal in a speech earlier this year.

But so too has China, which is investing $46 billion in an infrastructure development program called the China-Pakistan Economic Corridor. Meanwhile, two other regional powers, Russia and Iran, are also expanding their influence in the Caucasus and Central Asia at the juncture between East and West.

First, there's the strategic Baku-Tbilisi-Ceyhan oil pipeline from Azerbaijan to Georgia to Turkey, which ships much-needed energy supplies to Western Europe and Israel.

Second, there's the Southern Gas Corridor, which also begins in Azerbaijan and is now being extended into European markets.

Third, there's the Baku-Tbilisi-Kars railroad beginning in the capital of Azerbaijan and that will take people and products to Georgia and Turkey, opening new opportunities for expedited East-West transit.

For global policymakers, the lessons are clear: The new Silk Road must strengthen the aforementioned existing infrastructure and Azerbaijan must remain a major hub on the commercial and multicultural highway between East and West.

A moderate, modern and predominantly-Muslim nation, Azerbaijan has demonstrated its importance in wartime by facilitating the travel of American supplies through its borders to Afghanistan. The country has also sent troops to Afghanistan as well as to Iraq and the Balkans.

In his recent address to a joint session of Congress, Afghanistan's new president, Ashraf Ghani, repeatedly referred to Azerbaijan as a cornerstone of this commercial corridor between East and West. Explaining how the United States brought military supplies along "the route through Europe to Georgia, Azerbaijan ... and on to Afghanistan," he declared: "We have already made significant headway in making the vision of the Lapis Lazuli corridor that will link us to Turkmenistan, Georgia, Turkey and Europe into a reality."

With far-reaching investments in transportation infrastructure, Azerbaijan is committed to reviving this route. Connecting Azerbaijan, Georgia and Turkey, the Kars-Tbilisi-Baku railway is scheduled for completion later this year. This rail line will be able to move up to 20 million tons of freight and 3 million passengers from East to West, allowing Azerbaijan to export its enormous energy reserves to Turkey. The railway link will also allow Central and South Asian countries to increase the flow of goods to European markets.

Meanwhile, Azerbaijan is completing construction of the first phase of the Baku International Sea and Trade Port, the largest maritime export and logistics center on the Caspian Sea with a total capacity to move 25 million tons of cargo a year. Azerbaijan has also built a new terminal for Baku International Airport, accommodating about 3 million additional passengers.

With huge energy resources and a growing domestic market, Azerbaijan already links East and West. Currently totaling $2.3 billion, bilateral trade between Azerbaijan and the United States is increasing with the recent contract to purchase eight civilian airplanes from Boeing — an agreement that supports more than 11,000 American jobs.

Now, as in ancient times, the new Silk Road will be a fulcrum for exchanging ideas as well as products.

With a history of promoting trade, not terrorism, and fostering cultural coexistence, not sectarian conflict, Azerbaijan can make the new Silk Road a force for peace and prosperity in the 21st Century, just as its fabled forerunner was in ancient times.