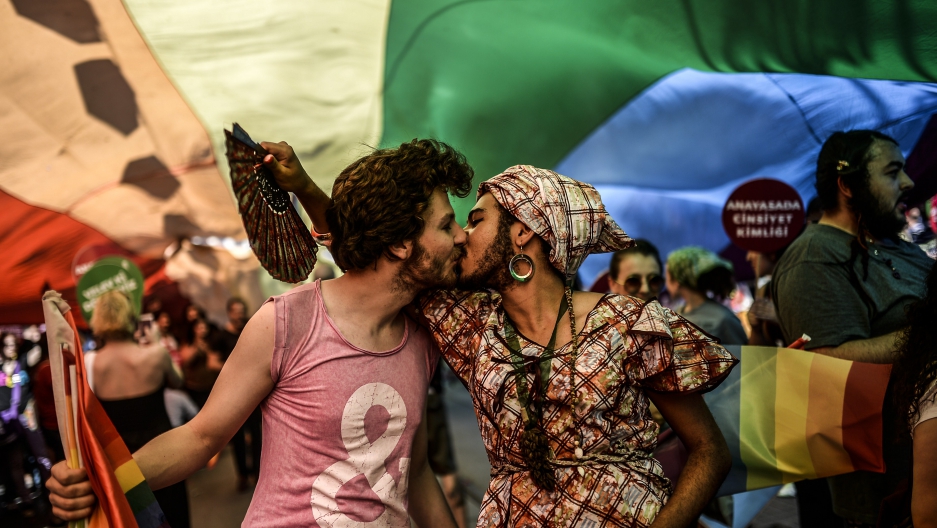 People kiss during a gay parade on Istiklal Street, the main shopping corridor in Istanbul, on June 22, 2014, during a Trans Pride Parade.
Credit: Bulent Kilic
Share

UPDATE: Initial results suggest that LGBT candidates were unable to win any seats in Turkey's general election on Sunday. But the pro-Kurdish HDP, to which one of the four candidates who ran belongs, crossed the 10 percent threshold required to enter parliament. The party ran on a platform that pledged to fight for LGBT rights.

ISTANBUL, Turkey — During a speech on the campaign trail last week, Turkey’s president, Recep Tayyip Erdogan, listed the reasons why voters should cast their ballot for his ruling Justice and Development Party (AKP) in Sunday’s general elections. One of them stood out.

“We are not nominating a gay candidate in Eskisehir,” he said proudly.

The city to which Erdogan refers, in western Anatolia, is where Baris Sulu hopes to become Turkey’s first openly gay member of parliament.

The 37-year-old has been actively involved in the country’s LGBT rights movement ever since coming out as a teenager. If elected, it would be the second time he makes history: in 2011, he and his partner became the first gay couple to apply for a marriage license in Turkey, albeit unsuccessfully.

Sulu is one of four LGBT candidates trying to take the community’s fight against discrimination from street activism into national politics for the first time. But although Turkey’s LGBT movement is flourishing, they face a difficult task as the government strikes an increasingly conservative tone.

Erdogan has upped the anti-LGBT rhetoric ahead of Sunday’s elections, keen to appeal to his religiously-minded support base and hoping to win votes in Turkey’s conservative Kurdish-majority southeast, where voters are switching to the pro-Kurdish HDP.

The president, who once said legal protection for LGBT rights was “essential”, more recently described homosexuality as “contrary to Islam”, and just this week denounced gays as  “representatives of sedition” (he is by no means the first politician to express such views).

For Sulu, such comments underscore the need for LGBT lawmakers.

“Discrimination starts from the top of the state and it goes from the top down. That’s why we need representation in parliament,” he told GlobalPost.

Sulu’s candidacy reflects the rising profile of Turkey’s LGBT community. Two years after the Gezi Park protests, in which LGBT activists took on a prominent role, the movement has become more vocal and better organized.

In last year’s local elections, a record 10 LGBT candidates ran for office. Although none were elected, some are now successfully fighting for change in politics: since LGBT candidate Sedef Cakmak became an assembly member of Istanbul’s Besiktas neighborhood, the municipality has begun offering free healthcare to transgender citizens.

The LGBT movement has also won the support of other activists. Even before Gezi, Istanbul was home to the largest gay pride march in eastern Europe, but in 2013 and 2014, the number of attendees surged to more than 100,000. Sulu expects similar numbers this summer.

“We are protesting because there is no other way to get our rights,” he said, warning: “That there are LGBT candidates is an important step for Turkey and there is more awareness, but laws haven’t changed.”

Homosexuality may have been legal in Turkey since the dying days of the Ottoman Empire, but there are no laws criminalizing hate speech or discrimination based on sexual orientation or gender identity.

Without legal protection, discrimination is widespread in all areas of life, from obtaining employment and housing to accessing health care and state services. Gay men cannot serve in the military, which considers homosexuality a mental illness.

For its LGBT citizens, Turkey can be a dangerous place. In 2008, openly gay student Ahmet Yildiz was murdered by his father, the first gay honour killing to receive widespread attention in the Turkish media. The country also has one of the world’s highest murder rates of transgender people.

The Turkish government has done little to combat anti-LGBT violence. Many LGBT murder cases remain unsolved; the father of Ahmet Yildiz is still on the run.

Before Erdogan became prime minister in 2003, he declared that “it is essential that LGBT’s human rights be protected before the law”. Since then, his party has barely mentioned the issue, besides proposing to build a special jail — dubbed a “pink prison” by activists and the media — to protect LGBT inmates.

“There is a tolerance zone of violence towards transgender people — on the streets, in their houses — because the police does not carry out a proper investigation,” according to Kemal Ordek, an activist for transgender rights at the Ankara-based Red Umbrella group. 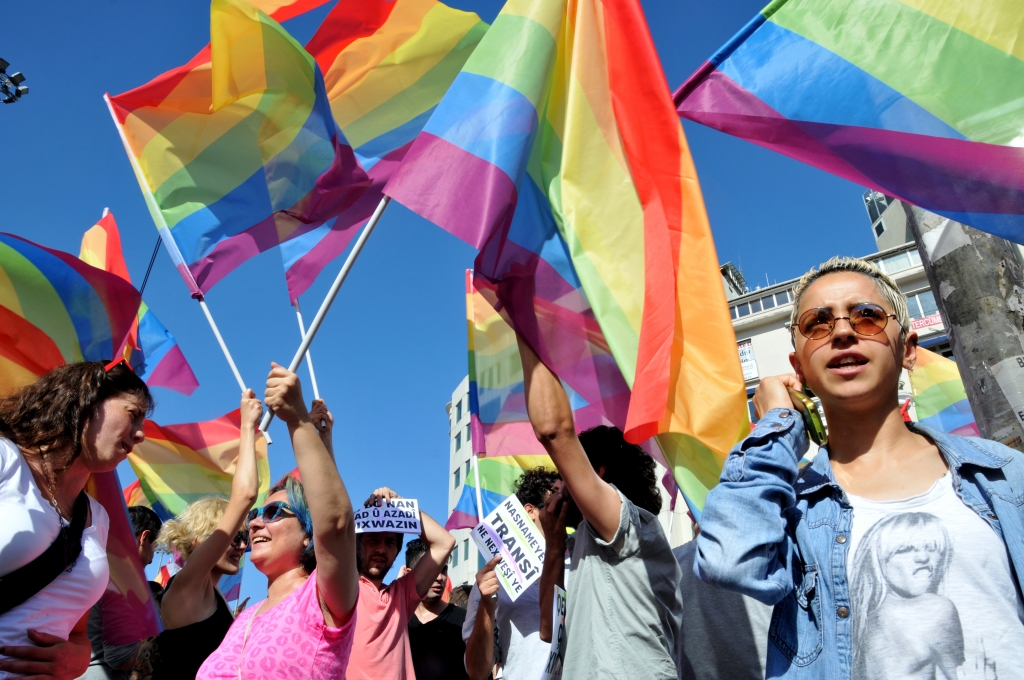 Deva Ozenen is a transgender candidate running for parliament in Izmir. Like most transgender individuals in Turkey, the now 37-year-old struggled to find employment after she transitioned at the age of 18. Poverty eventually forced her into sex work, a time she describes as the worst years in her life.

She angrily recounts how police refused to investigate a break-in at her house long after she had found a job as a translator.

“The police officers laughed in my face and asked me: ‘how many of your customers have keys to your house?’,” she said.

With police turning a blind eye, transgender sex workers are vulnerable to attacks and harassment, often at the hands of their clients. In the first half of May alone, seven transgender women — at least five of them sex workers — were attacked in Turkey.

Outside the sex industry, Turkey’s LGBT community encounters harassment in day-to-day life. Ozenen decided to stop campaigning on the streets after constant threats and mockery, worried she might be damaging her party’s image. Over the past week, pro-government newspapers have targeted Sulu, publishing a slew of homophobic articles and claiming to be in possession of “shocking” images.

Both Sulu and Özenen vow to push for a specific ban on discrimination against LGBT people, even if they are not elected on June 7th.

They admit that they are unlikely to win a seat in parliament: Ozenen runs for the relatively unknown Anadolu Party, which split off from the main opposition CHP last autumn, and Sulu is placed at the bottom of the candidate list for the pro-Kurdish liberal HDP. The other two LGBT candidates are also running for positions low on HDP lists.

For Ordek, this is a sign that political parties are still reluctant to give full support to the LGBT movement.

“If they were sincere in terms of representation of the LGBT community, they would really be pushing forward to put an LGBT person to high-ranking positions for the elections,” he said.

“Representation brings change. If you don’t have a strong LGBT candidate, society may not change.”