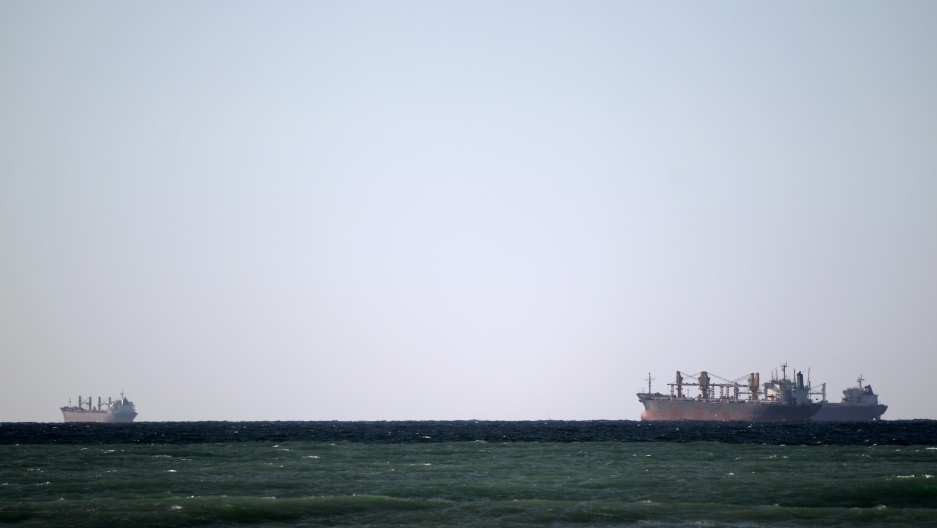 Oil tankers cruise out the Strait of Hormuz off the shores of Tibat in Oman.
Credit: Marwan Naamani
Share

MUSCAT, Oman — For more than a year now, Americans have been reaping the benefits of low oil prices.

US gas now averages $2.71 a gallon, almost $1 cheaper than a year ago. Official estimates suggest the average US household is saving $750 a year. But what has been a boon to US consumers is causing serious problems for some faraway oil producing countries.

Crude oil prices in the Gulf have dropped about 40 percent from their peak last year. A side effect of this has been that oil producing countries from Venezuela to Oman have seen their government budgets squeezed and workers laid off.

"Whatever happens on the oil price will really affect the budget," Salmi told GlobalPost.

Historically the Omani government spent freely by subsidizing gasoline, which only costs $1.20 per gallon at the pump. It increased social spending in light of Arab Spring demonstrations; corruption and lavish spending on the country's autocratic monarchy also take billions of dollars from the budget.

So the drop in oil prices led to a round of belt tightening. This year's budget calls for a 25 percent cut in defense spending and 48 percent slash in subsidies and social welfare.

"The most affected is the middle class because their incomes will be reduced," Sadeq Sulaiman, a former Omani ambassador to the US, told GlobalPost in Muscat. "The top people have a lot of money. They can survive for another 30 years."

Sulaiman and other Omanis suspect that Saudi Arabia intentionally keeps prices low for political reasons: to punish enemies Iran and Russia while grabbing market share from US oil producers.

There are also economic reasons, like paying for its recent war in Yemen and other security needs. Political price manipulation "is plausible but it's not the only motivation," Sulaiman said.

In recent years the US has become the No. 1 world producer of natural gas, and is on its way to ranking No. 1 in oil through the increased use of hydraulic fracturing (fracking). Low oil prices have forced some US oil producers to cut back production because they can't recoup expenses from the more expensive fracking process.

All this benefits Saudi Arabia, which sits on billions of dollars in investments and can ride out low prices for the time being, according to Omani experts. 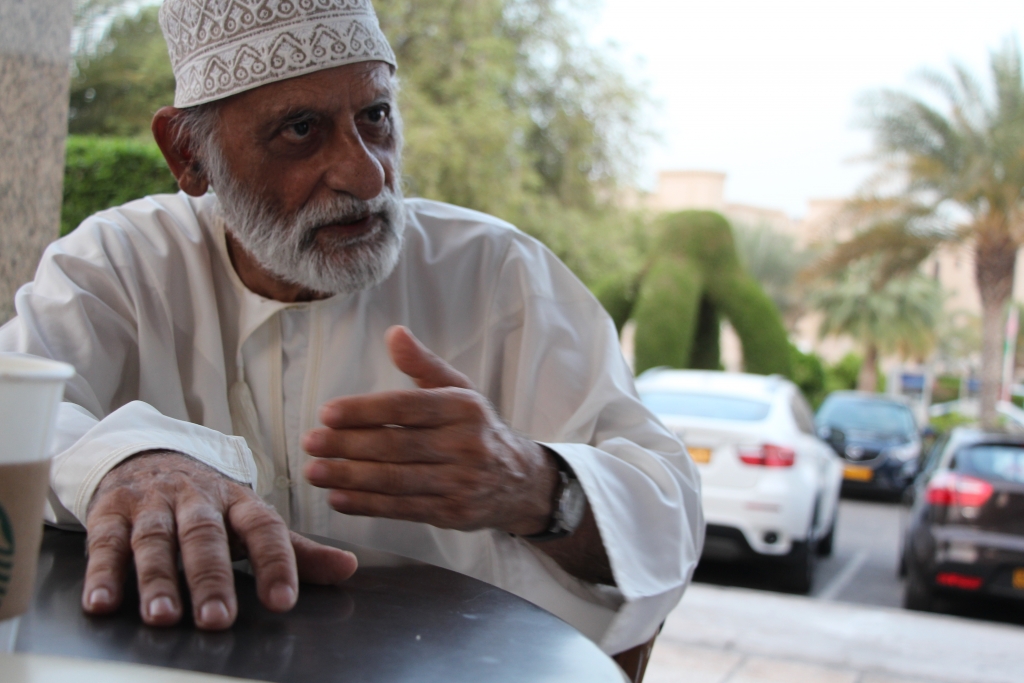 Sadeq Sulaiman, a former Omani ambassador to the US, in Muscat.

Regardless of the cause, low oil prices have caused a crisis in Oman. A massive 77 percent of Oman's budget comes from oil revenue. As far back as 1990 the country's leaders discussed the importance of diversifying the economy to become less dependent on oil.

Leaders in the nearby Emirate of Dubai used oil and gas revenues to develop their country into a financial, tourism and airline hub. Dubai became famous for its ultra-modern airport and building the world's tallest building. Oman hasn't come close to that kind of development.

Omani analysts agree that education should play a key role in diversification. But Oman's education system has actually slipped backwards in recent years, according to Yousuf Al Harthy, a businessman and economic analyst in Muscat.

Oman's K-12 education system is ranked 72 of 76 countries surveyed around the world, according to a just released report by the Organization for Economic Cooperation and Development. By comparison, the neighboring United Arab Emirates ranks 45th.

"The only hope we have is the education system," said al Harthy, "and we don't seem to be doing very well."

He says the poor quality education at both K-12 and university level have long-term implications for political stability in Oman.

"We're sitting on a time bomb," he said. "The time bomb is the large number of young Omanis who aspire to better standard of living, for better jobs, who cannot get jobs."

But other Omani leaders are considerably more optimistic.

Tawfeeq al Lawati, a member of the executive committee of Oman's Shura Council or parliament, says the country plans to develop manufacturing, transportation and tourism. The government wants to build factories to turn natural gas into fertilizer and refine crude into diesel.

"We will have our own refinery" at the Duqm port, said al Lawati, and Oman will benefit from exporting value-added chemicals rather than just crude oil.

The government has poured billions of dollars into building a port in Duqm, located along the central coast 280 miles from the capital Muscat. Plans call for linking the completed port with a rail line to the UAE. 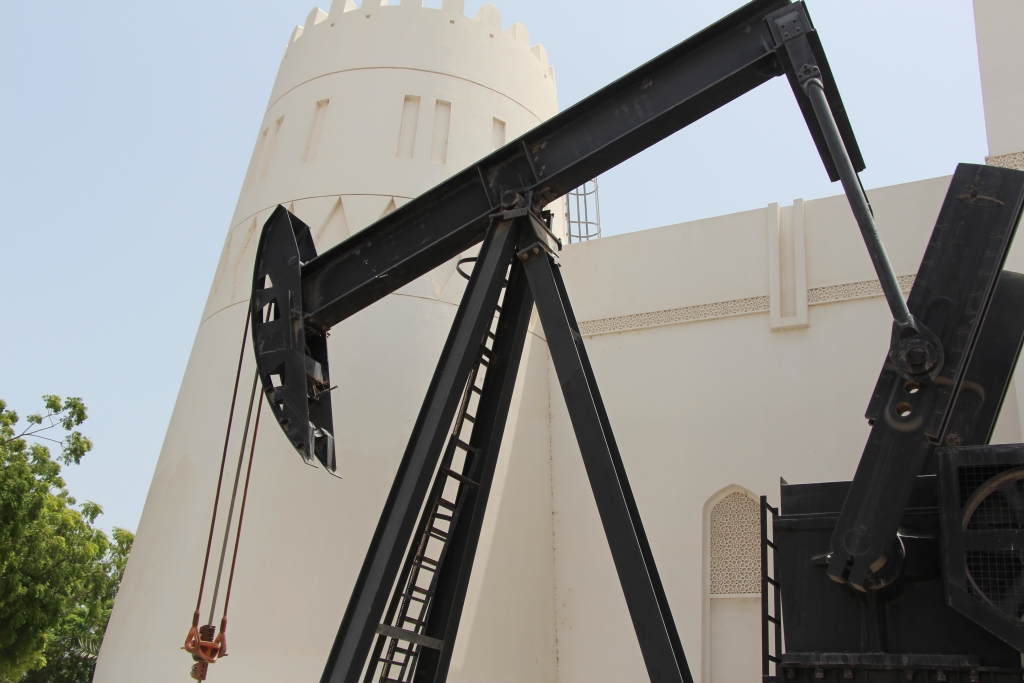 A decommissioned pump jack in the Omani capital, Muscat.

The Oman government hopes to make Duqm an alternative transportation route to avoid the volatile Straits of Hormuz, where shipping has been periodically disrupted during wars and political crises. Ships could offload in Duqm and transport their goods by land to other parts of the Middle East.

Duqm, said al Lawati, will "make Oman a main logistics hub for the region." But many of these plans have been discussed for years, and it remains to be seen how many will be implemented.

Union leader Salmi agrees Oman must develop alternatives to oil, but in practice that's not easy.

Referring to the lack of other options, he said, "It is scary really."

GlobalPost correspondent Reese Erlich's most recent book is "Inside Syria: The Backstory of Their Civil War and What the World Can Expect," available in English and Arabic.