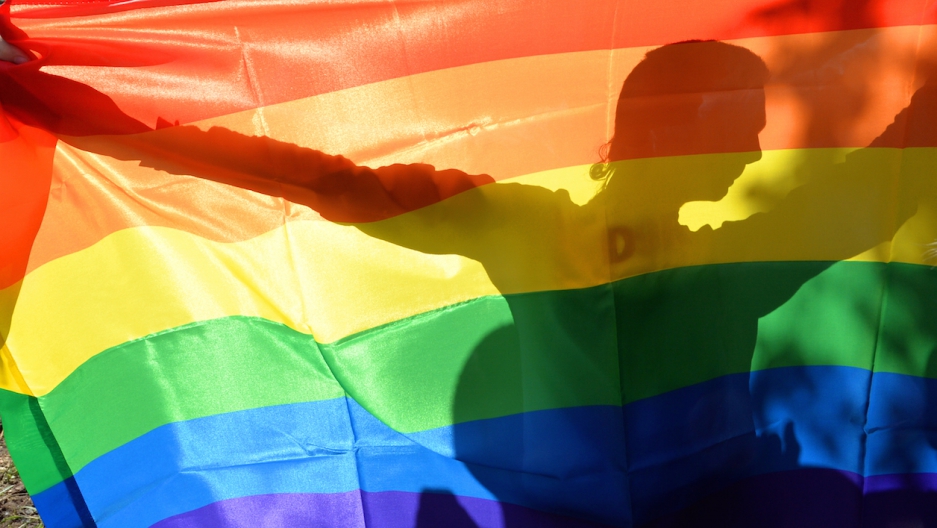 An activist's silhouette is seen through a rainbow flag during a gay pride parade in Kyiv on May 25, 2013.
Credit: Sergei Supinsky
Share

Update: Ukrainian President Petro Poroshenko publicly expressed his support on Friday for the March for Equality, saying police would ensure security for the event on Saturday. The organizers, KyivPride, also said in a statement they would go ahead with their planned march.

KYIV, Ukraine — The ceasefire's in tatters, the president's warning of another Russian invasion, and the country’s struggling to get itself together.

This is no time for a gay pride march in Ukraine’s capital city — at least that’s what Kyiv Mayor Vitali Klitschko believes.

Klitschko is asking organizers of the March for Equality to call off their event scheduled for Saturday, citing security concerns and potential provocations.

“Today, when the war continues in eastern Ukraine, holding public events that also have varied perceptions in society is not in good timing,” he said in a statement.

“We now have one enemy — military aggression in the east. That is why I call on everyone not to play into the hands of the enemy, not to inflame hatred and not to create another confrontation in the center of the capital.”

Klitschko’s comments came a day after fresh fighting in the east killed around two dozen people, the result of what Ukrainian officials say was a Russian-backed separatist offensive.

But some critics claim city officials are using the war as an excuse to avoid socially controversial issues, like the rights of minorities and lesbian, gay, bisexual and transgender (LGBT) people.

“Wartime is a period when human rights are abused particularly severely, which is why we think it’s necessary to hold the march and draw attention to the problem,” said Dafna Rachok, press secretary for KyivPride, the organization that’s planning the event.

Rachok said her group will continue lobbying city officials to ensure the march takes place. But if last year is any indicator, the chances don’t look great.

Back then, organizers decided to cancel their event after Klitschko made a similar statement and police warned they couldn’t guarantee security on the streets.

Amnesty International’s Ukraine office is urging officials to ensure safety at this year's event, adding that the march is an opportunity for members of minority communities to voice their concerns over discrimination, which is rife here.

But despite the criticism directed against officials, there are signs their safety concerns might actually play out.

Right Sector, an ultranationalist political and paramilitary group, called on Klitschko earlier this week to ban the march.

Fierce fighters on the front lines, they’re not exactly known for their liberalism: Right Sector says promoting LGBT values threatens the country’s Christian heritage and will only further inflame tensions.

“This [march] is not only work aimed at the moral decay of the Ukrainian people, but also spitting on the graves of those who died in battle for Ukraine, as well as on the living defenders of the Fatherland,” Right Sector leader Dmytro Yarosh, also a member of parliament, wrote on Facebook Thursday.

He even suggested members of his group might leave their positions in eastern Ukraine to come block the march in Kyiv on Saturday.

But no matter, LGBT supporters say — the show must go on.

“Right Sector: your threats of physical violence against people who don’t think or act like you makes you no better than [Russian President Vladimir] Putin for me,” one activist and journalist, Alya Shandra, wrote Thursday.