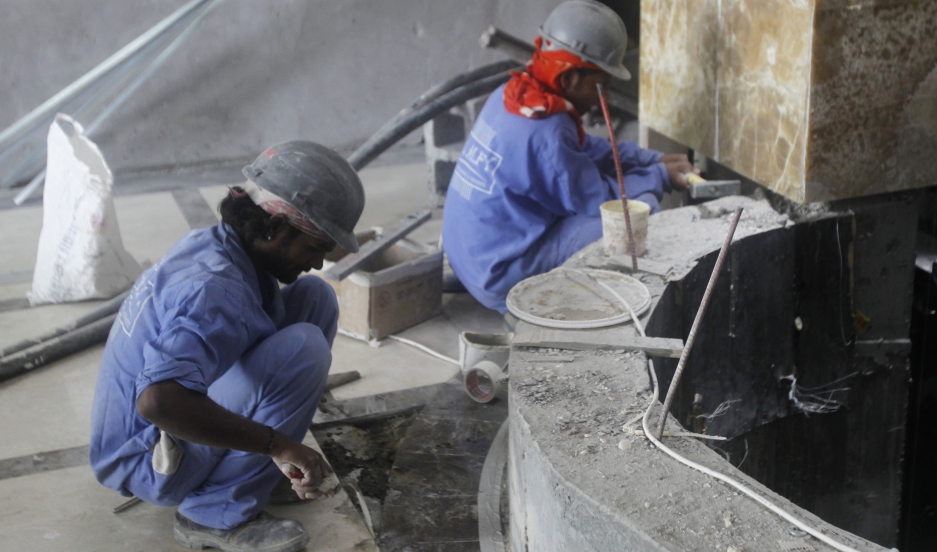 Laborers work at a construction site in Doha, Qatar.

The indictment and arrest of some of the world's top soccer offficials and the resignation of longtime FIFA chief Sepp Blatter have reignited festering conversations about how Qatar obtained the rights to host the World Cup in 2022.

1. Did Qatar use bribes or otherwise behave improperly in winning the right to host the event?

2. Is something lost by moving the World Cup into the winter, outside of the traditional window for the games, because of the host nation's excessive summer heat?

3. What about all those migrant workers who will be used — and some would say abused — in building all of the facilities Qatar needs to host the games?

That last question is probably the most serious — even though the US Department of Justice is reported to be looking into the first. The migrant workers, many from Nepal, endure scorching temperatures and cramped living conditions as they build stadiums and other infrastructure projects. They're essentially forced to stay in the country, unless their employer gives them permission to leave.

Vani Saraswathi, a journalist who has lived in Qatar for 15 years and is a contributor to Doha-based nonprofit MigrantRights.org, points to the numbers of Nepalese workers who die of sudden heart attacks (67 last year, according to the Guardian) as a disturbing sign of the harsh conditions workers face. Yet she is critical of how US and European media outlets have covered the issue.

“If you just focused on facts, you’d still have strong reports of exploitation in Qatar," she says. "But by blowing these statistics out of proportion, you’ve given Qatar a way to say it’s not as bad, people are making up stories.”

While independent political activism is illegal in Qatar (though elections have been promised for next year), there are Qataris, many of them young, college-educated, and reform-minded, who would like see improved working conditions for migrant workers. They say reports that lack content or context may end up doing more harm than good — and give the regime cover to escape real change.

A recent Washington Post infographic sought to compare worker deaths related to other major international sports tournaments with the number of deaths of Qatari workers. The image of rows and rows of red figures, representing 1,200 deaths, listed under Qatar, compared to solitary figures representing one death each for previous Olympics in London and Vancouver, for example. The graphic went viral, but the blog post containing it later was corrected to show figures included all migrant worker deaths in Qatar, not just those related to World Cup construction.

Make no mistake: Migrant workers often live and work in unfair, dangerous conditions. Qatar's migrant workers are regulated under the “kafala system,” which means they must has a local sponsor to stay in the country. The sponsor can prevent workers from seeking other jobs, and will often confiscate their passports and IDs. Human rights organizations have documented widespread abuse, including forced labor, late wages and harsh working conditions.

But in comparing all worker deaths from one country and only deaths attributable to sports projects from others, activists say it become unfair — and they say it gave the regime an easy rebuttal to their effort to improve migrant conditions for migrant workers. Qatari officials demanded the graphic's retraction — and the criticism extends to some young, progressive Qataris.

Alanood Al-Thani, a 21-year-old journalism student at Northwestern University’s Qatar campus, has progressive bona fides: a pro-democratic student vocal about social justice. And Al-Thani — who shares a last name with the country’s ruling family but is only distantly related —  has been critical of the World Cup and FIFA on Twitter.

Yet, she says: “When you see all of these news articles that are coming out, I agree with most of them, but when you look at most of them, there is not one single Qatari perspective in it."

Her sentiment is common among Qataris who use social media in English. Mohammed Al-Jufairi, a 29-year-old civil and contract engineer who works for a gas company, wants better rights for migrants, but adds: “The coverage is very unfair. ... They are screwing with facts and messing up numbers so that they will get the world’s sympathy and get the World Cup taken away from Qatar.”

Ibrahim Al Hashmi, a 21-year-old recent graduate of Northwestern University in Qatar, belives the kafala system must be overhauled, but has grown tired of the way foreign media covers it.“There is no question about it — what’s happening is inhumane and the labor system obviously needs to be fixed,” he says. “But at the same time, this has been biased media coverage. It’s always ‘attack Qatar,’ no matter what.”

Part of the problem, says Saraswathi, is the way the Qatari government deals with reporters. A BBC crew invited to the country to film the conditions of migrant workers was arrested, detained and deported when they strayed from the planned itinerary and attempted to do independent reporting. The crew was interrogated for hours. One of the officers told them, “This is not Disneyland" and  "You can't stick your camera anywhere."

“The lack of nuanced reporting is Qatar’s problem, too. The media is not free,” Saraswathi says. “They haven’t allowed journalists to write about it, talk about it freely in the print media. Only Doha News has covered the issues consistently, but it’s only in English.”

Al-Thani is worried about what will happen next, and it’s not because she’s a soccer fan. When Qatar won the bid, she was hopeful that the World Cup would be a boon for the causes she supports. While progress has been slow, there have been small changes — the government has announced small changes to labor laws, though it has been slow to implement them. But she would see her country losing the World Cup as a dramatic setback.

“The World Cup has brought a lot of pressure from the outside and within our country itself,” she says. “I don’t think a lot of people realize that there is pressure locally for reform, and the World Cup gives the government more incentive to change. If you take away the World Cup, we’re just going to go back to the slow pace of reform and progress we had before.”

Jens Sejer Anderson, who directs the Danish Institute for Sports Studies says, agrees. “I don’t think the Nepalese guest workers would appreciate that all the focus that is now on Qatar from the global media will disappear if Qatar should lose the right to host the World Cup.“

Sejer, however, says the widespread Qatari reaction to criticism is similar to that from previous World Cup host nations. "These countries that want to host the big events and enjoy the global limelight,'' he says, "must also get used to the fact that the world will also look at the more shadowy sides.“